Simon Lansley is Chief Executive of ConnectSport, a not-for-profit media channel dedicated to the ‘Sport for Development’ sector, which incorporates any organisation using sport or physical activity to generate positive social outcomes. Here he explains his journey from mainstream media into this exciting new sector.

It seems like a lifetime ago now, but I spent 16 years at The Press Association. Looking back on those pre-Twitter days, nothing could beat the buzz – as sports editor – of sending out a snap on the wire and watching breaking news spread like wildfire across Sky Sports News, BBC Sport online, Radio 5 Live, and often across the globe.

A decade on, I don’t envy my successor’s role in picking out the truth from the post-truth, but there were other reasons why I decided to get out. Objective journalism was one of the main reasons I spent so long at the heart of the industry, with PA, and it was that growing sense of more and more media outlets letting the commercial tail wag the editorial dog which made me wonder about where it was all going.

Of course, every business needs to be sustainable – but something didn’t sit right with me. I felt certain there was more to sport and the media than just making a profit. Both captivate the nation, and both reach into our living rooms and lives; couldn’t they be doing more to benefit society, or is that just a romantic and unrealistic notion? Maybe, but maybe not.

Shortly after leaving PA in 2011, I set up ConnectSport. My (extremely supportive) partner still laughs about the day I came up with the name. “You kept banging on and on about reconnecting sport with community, or something like that,” she recalls. In truth, it was her job – and the grim stories of Child Protection Social Work – which also got me thinking: sport must be able to contribute more, and we in the media should be encouraging it to.

That’s when I found Street League …. or maybe it found me, as its new Head of Communications. I suppose technically it was a backwards career step from the lofty heights of the national media, especially when watching my former colleagues reporting from London 2012. But it didn’t feel like it. The charity was small but growing fast at that point – using football to attract 16 to 24-year-old ‘NEETs’ (not in employment, education or training) from disadvantaged communities and giving them the key employability skills they’d missed out on after dropping out of education.

This really was the Beautiful Game at its finest. Wherever I went, from Brixton to Birmingham, from Teesside to Toxteth, you could melt the ice in seconds by asking the young people who they supported. “United”, “Arsenal”, “Celtic” they’d snap back; “Well, I support Wolves,” I’d say. “And did you know they started the Champions League?”

They’d fall about laughing, and within a moment, there we were, talking about the difficulties they were facing at home or down the Job Centre, how they’d prefer to ‘find’ their own funds than claim JSA. It was amazing, and it was cathartic after all those years of press boxes and PR pitches. It was real.

Fourteen cities and four years later, I left Street League to focus again on ConnectSport, and now I knew exactly what we had to do. There are thousands of organisations like Street League out there, and not just charities and social enterprises – full of committed volunteers and coaches – but community departments at professional clubs, local arms of national governing bodies and County Sports Partnerships, player or athlete foundations, community groups and public health programmes, all using the power of sport to support their communities.

The problem is, of course, their stories don’t sell newspapers so they think the media isn’t bothered. But they are still there, doing their work, largely unrecognised and frequently poorly paid, if at all. Thanks to social media we can reach out to them now, so we just need to help showcase the people, places and providers who make community sport work. This is an industry that deserves to have its stories told. 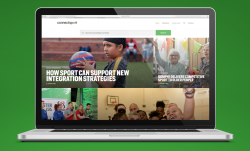 Fast forward two years, and by late spring 2018, we had relaunched the new ConnectSport website, and we’re now working closely with the Sport for Development Coalition, a group of funders and charities including Comic Relief, Laureus and Street League, to bring structure and influence to the sector. Thanks to their steadfast work away from the headlines, and to the DCMS’ Sporting Future strategy – which focuses on the social outcomes of sport such as mental wellbeing and community cohesion – there’s a real energy and vibrancy about the sector. On the international stage, sport’s contribution towards the UN Sustainable Development Goals is adding to the momentum.

Of course there are still big, awkward debates to be had about how community sport is funded in the UK, and whether sport can provide the evidence to justify investment from other Government departments like health and criminal justice. But the Coalition is focused on making that happen, and ConnectSport is dedicated to supporting it.

So the great news is that, as the sector gathers momentum, we are going to need even more ‘sport journalists’ to become ‘Sport for Development journalists’ – just like I did.

To find out more about ConnectSport and the Sport for Development Coalition, visit www.connectsport.co.uk or follow @ConnectSport on Twitter.