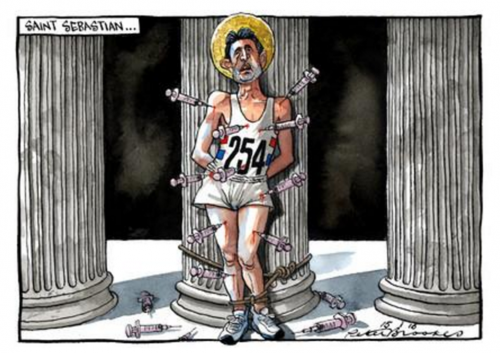 Pieces of original artwork by a two of Britain’s best-known and most highly regarded cartoonists, a signed picture of the Formula 1 world champion and free tickets to gala sporting eventts and valued at more than £500 form the prizes in the SJA’s special fund-raising charity draw to be held at our British Sports Journalism Awards at the Lancaster London on February 22.

Peter Brookes, the esteemed Times artist, and MAC, of the Daily Mail, have both generously donated their works – in MAC’s case a special drawing done for the occasion, while Brookes has donated the original of his caricature of the Passion of St Sebastian, an image which might be much sought-after by many of the sports news correspondents who are expected to attend our awards dinner, which is sponsored by BT Sport.

The SJA’s nominated charity for the evening is a cause close to home, The Journalists’ Charity.

Through its care homes and sheltered housing, as well as financial help for individuals in strickened circumstances, what was once known as the Newspaper Press Fund has been helping journalists for more than 150 years. A week on Monday, the SJA wants to help The Journalists’ Charity, and hopefully most of the 450 guests expected at our award dinner will buy a handful of prize draw tickets.

All of the proceeds from the draw will go to The Journalists Charity.

“The Journalists’ Charity carries a huge workload for our profession,” Steven Downes, the SJA Secretary, said, “looking after many retired colleagues at their homes in Dorking and those who’ve unfortunately encountered hard times. The SJA is keen to help, and we hope that our guests later this month will take part in the prize draw generously, encouraged by the terrific prizes on offer.”