If the pre-awards talk on Twitter was anything to go by, SJA 2018 Sports Photographer Mark Thompson was the unanimous choice of his peers to lift the Ed Lacey Trophy.

In the end it was a hat-trick of accolades for Getty’s Thompson, who took the specialist portfolio (Phil Sheldon award) and sports picture of the year prizes too at the British Sports Journalism Awards sponsored by Canon and European Professional Club Rugby.

Thompson looked suitably shell-shocked as the prizes came raining down. Apparently he doesn’t do twice in one night – on Monday at the Westminster Bridge Park Plaza he went one better.

This is the image which swung it.

Chairman of photography judges David Ofield said: “Mark captured a unique moment – a split second window on a global event.  In these fast and furious days of international Formula One racing – this image was exceptional.”

Here’s one from the specialist portfolio.

Freelance Eddie Keogh always seems to be in contention for the SJA awards and he did it again in the ‘away from the action’ category. Keogh captured the England football squad charging towards him during training – we can only assume he avoided what looks an inevitable collision.

The judges said: “The winning photograph showed something different for the judges. It was a beautiful picture for the moment, where the composition was good, the subjects engaged and you can see a real connection.”

Julian Finney of Getty Images was the recipient of both the football portfolio and the Canon sports portfolio awards. Hands up how many people shudder and look away at the sight of Jan Vertonghen of Spurs sticking his finger into Roberto Firmino’s eye?

He received his award from Canon’s Jakki Moores, who admitted: “There was more debate in this category than any other – it was a close decision – but Julian’s use of imagination, good light and a variety of subjects in a beautiful portfolio won the vote.”

And finally, the snappers snapped: Thompson, then Keogh and finally Finney, presented by The Guardian’s Tom Jenkins. 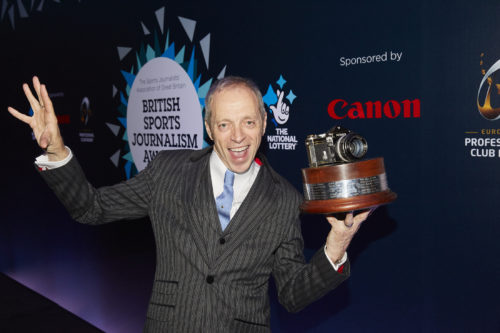 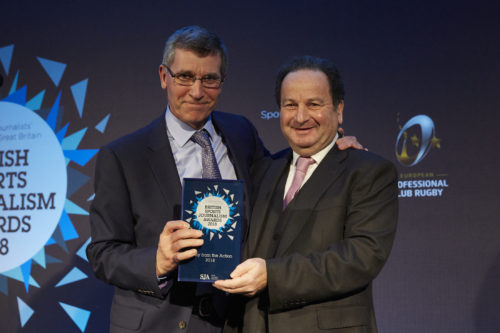 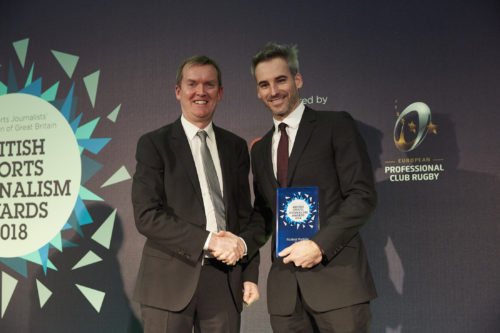 More than 600 guests were at the Westminster Bridge Park Plaza to see the creme-de-la-creme of writers, photographers and broadcasters receive journalism’s ‘Oscars’.

Thanks to Canon, we were able to showcase the winning photos at the awards presentation.