The future of sports journalism is in safe hands judging by the winners of the prestigious young photographer, writer and broadcast categories at the SJA 2018 British Sports Journalism awards.

The young writer category, the Ian Wooldridge award, has been a regular at the British Sports Journalism awards but this is the first time the SJA has added young photographer and broadcaster.

The winners and a guest have been invited to the Westminster Bridge Park Plaza on Monday February 25 to receive their awards at the gala occasion in partnership with Canon and European Professional Club Rugby. Entrants who did not quite make the final cut can buy tickets at our discounted members’ rate of £60 + VAT.

Baker, who beat off 250 applications to win a year’s intern experience at Getty Images in 2017, impressed a room full of judges who made their choices ‘blind’.

The judges said: “The standard in this category was exceptional and demonstrates the promise of new talent throughout the industry. The winner was a creative photographer with a great eye, who demonstrated good use of light, imagination and flair.  The photographs were a unique viewpoint on the sport captured.”

The judges acknowledged that many of the entrants did not have access to expensive equipment but they demonstrated a knowledge of the basics of photography to achieve some great pictures.  The entries did not always capture big events, but showed initiative at grassroots sports events. 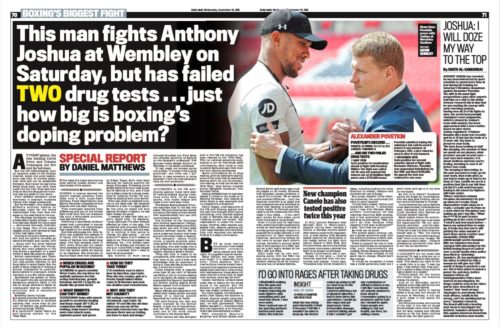 Matthews’s submissions included two hard-hitting boxing articles, one a revealing and fascinating on-line interview with Tyson Fury’s father just before the heavyweight fought Deontay Wilder and the other tackling the sport’s doping problem in the run-up to an Anthony Joshua fight. His third was a Premier League match report.

The judges said: “Daniel showed an appreciation and understanding of the sport of boxing and was prepared to tackle controversial issues. He also showed his versatility by reporting on football. He deserves to win the Ian Wooldridge award, standing out in what was a very high-class field.”

Taylor started broadcasting for Sky Sports News at the age of 24 in 2018.  He has broken news on air, conducted interviews, updated viewers on live events and reported on stories. He has also utilised fan interaction on Twitter and introduced Google Trends as a digital news-gathering resource.

The judges said: “Our winner’s work was  confident and relaxed yet authoritative.  At ease with technology, he demonstrated flexibility and versatility in a demanding live rolling news environment.”