The prizes have been collected, the hangovers receded, mortgage taken out for the bar bill and now it’s time to look back at the highlights.

There were 1822 articles to read this year in the writing section of the British Sports Journalism Awards sponsored by Canon and European Professional Club Rugby – it’s hard work being a judge, you know – which made it a hugely difficult job to whittle down entries into shortlists.

While it is always nice to see familiar faces, it is also encouraging when ‘newcomers’ join the SJA’s big-hitting roll of honour.

And we are delighted to call 2018 The Year of the Dinosaur, after Sunday Mirror’s John Richardson proved that age is no barrier to story-getting, while also flying the flag for the tabloids. He broke the news that Steven Gerrard was to be the next manager of Rangers, as well as predicting the appointment of Mark Hughes at Southampton and his submissions earned him SJA Sports News Reporter of the Year award.

Ricco’s speech turned out to be a winner too.

Talking about speeches, big hand for Neil Allen of the Portsmouth News, who scooped the regional award and then made a staunch and impressive case for the role of local newspapers covering their local team.

Paul Hayward of The Telegraph sets the bar high. Very high. He is the SJA British Sports Journalism Awards Sports Writer of the Year for the fifth time – voted for by a panel of professionals including sports editors.

But the younger generation is knocking on the door too with Jonathan Liew of The Independent certainly making himself heard.

The sports columnist category is high-profile and populated by the likes of Hayward, The Mail’s Martin Samuel and Daniel Taylor of the Guardian. Yet is was Liew who was judged the winner and he reacted in amazed delight.

Owen Slot of The Times is a prodigious winner at the SJAs in a variety of different categories and he now has made rugby writer his own preserve. European Professional Club Rugby’s chairman Simon Halliday presented the EPCR Rugby Journalist of the Year award  too him for a second successive year.

There was another new name in the specialist correspondent category, The Mail’s Jonathan McEvoy producing an impressive F1 submission to win the top prize.  Talking of The Mail, they were also voted sports website of the year and newspaper of the year but, despite  having four of six stories in the scoop category, James Olley of the Evening Standard’s ‘Wembley for sale’ entry won on the night.

Alastair Cook’s final Test turned out to be extra memorable for The Telegraph’s Scyld Berry,  who ended Michael Atherton’s amazing run for The Times in the cricket writer category thanks to his reporting of that finale. Berry generously acknowledged the contribution of colleague Nick Hoult as he collected his award.

Guardian and Observer columnist Daniel Taylor received praise for his exclusives as he once again won the SJA Football Journalist of The Year for the fourth successive time. 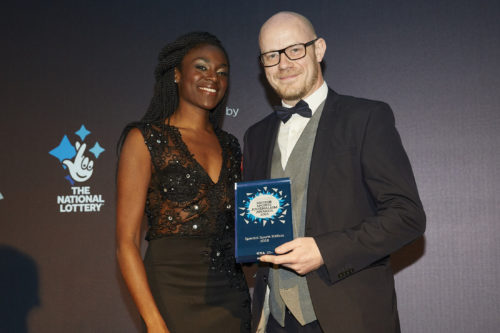 The biggest cheer of the night was reserved for the final recipient. Legendary broadcaster and commentator Barry Davies had the whole room at the Westminster Bridge Park Plaza on their feet when he was given the Doug Gardner award for services to journalism and to the SJA. Former chairman David Walker presented the award.

There were more than 600 guests at the gala occasion, hosted by Jim Rosenthal, including 10 next-generation writers, broadcasters and photographers as guests of the National Lottery. Canon hosted young photographers who made the shortlist.

We also had three more winners, the Young Writer, Young Photographer, and Young Broadcaster categories were decided in advance of the evening and invited to the Westminster Bridge Park Plaza. 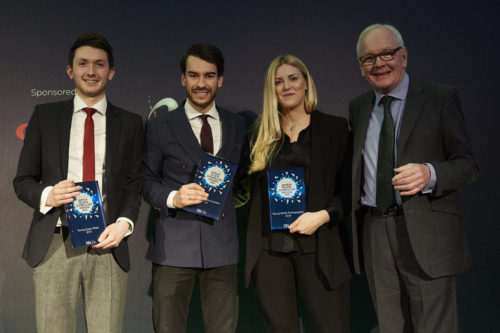