2009 IN REVIEW: The Mail on Sunday‘s PATRICK COLLINS, the SJA’s Sports Writer of the Year, reflects on another outstanding 12 months of sport The Test match was 54 minutes old, and the Springboks were lifting the pace to ominous levels. The battered remnants of the British and Irish Lions had been patched up and sent out for the last game of a heart-rending tour, and they had performed heroically. Two fine tries had been scored and a lead established, but now the ‘Boks were asserting themselves.

And then it happened. As South Africa sent their runners at the line, a centre flung an indiscreet pass. Ugo Monye, the English wing whose fallible finishing had cost the Lions dearly in the first Test, sprang to intercept. He plucked the ball from the air with his right hand, and set off on a chest-heaving, knee-pumping, 80-yard sprint to the posts.

One Springbok gave persistent chase, encouraged by Monye’s decision to break stride and punch the air. But the gap was maintained, the try was delivered and the Lions were almost home. A man who, a generation earlier, would have found no welcome at Ellis Park had led the rout of the world champions. The series was already lost, but those of us who shivered by the touchline on that chill July afternoon felt truly privileged to watch Monye secure a kind of consoling glory for Ian McGeechan’s proud team.

In truth, this year of sport was touched by a good deal of glory. A summer which sees the Ashes regained could scarcely be less than magical, and if its impact was reduced by the absence of free-to-air television, then the satisfaction of victory remained as rich as ever. And the narrative was compelling, from England’s unlikely survival in Cardiff and the rare and wonderful victory at Lord’s to the draw at Edgbaston, Australian success at Headingley and the extravagant English triumph at The Oval to seize the urn. 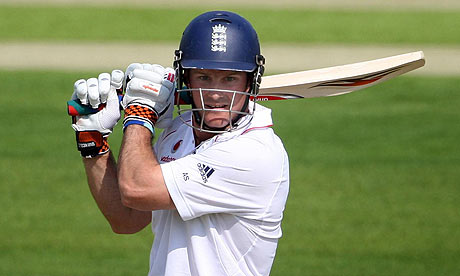 And through it all – soothing egos, laying plans and scoring mountains of runs – was an England captain from Central Casting. Andrew Strauss remained serene while leading ruthlessly from the front. It was a remarkable achievement.

Equally impressive were the England women’s team, led by Charlotte Edwards, who retained the Ashes and became world champions. Wisden marked their continuing excellence by selecting Claire Taylor as one of their cricketers of the year, the first woman so honoured.

It seemed that almost everywhere we looked we found a nation happily punching above its sporting weight. There were all those wonderful cyclists: Victoria Pendleton and Lizzie Armistead winning gold, silver and bronze at the world track championships; Bradley Wiggins, finishing fourth in the Tour de France and giving notice of thrilling possibilities; and Mark Cavendish reeling off six stage victories. Not to mention the Old Man of Hoy. What did we do to deserve them? Well, we invested intelligently and discovered some gifted coaches, and it all came together. 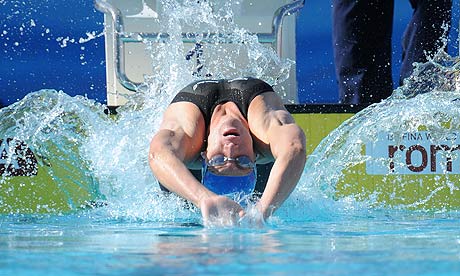 Similarly with swimming. For too long our natural home has been below stairs; waiting hopefully lest an American or Australian should stumble. But we are now increasingly capable of offering an argument. We emerged from the world championships with two golds, Gemma Spofforth (pictured above) and Liam Tancock, three silvers and two bronzes. With Tom Daley becoming Britain’s first individual world diving champion, we see that a glittering range of talent is stating its case for London 2012.

Why, the list is expanding by the week. Consider Beth Tweddle’s reaction to the flawless routine which made her the world champion at the O2 Arena. “The crowd just kind of did it for me,” said the sublime gymnast. “To hear the whole arena shouting for you is just the best.” When they heard those words, the organisers of 2012 turned a few somersaults of their own.

Chrissie Wellington provokes similar optimism. Winner of the Ironman triathlon for the past three years, she is a perceptive, articulate and idealistic woman; the best that sport can offer. She will undergo intense pressure come 2012, and she will handle it effortlessly.

It is that ability to flourish under pressure which separates the champion from the contender. Jessica Ennis and Phillips Idowu brought it off brilliantly at the athletics world championships. Jenson Button emerged from a feud-ridden, scandal-racked year of motor racing with the Formula 1 world title. And David Haye beat Nikolai Valuev – big as a mobile home, if somewhat less mobile – for a slice of the world heavyweight title.

The national sport gave us reason for qualified celebration, largely through the ease of England’s World Cup qualification. Any England coach is always only one defeat away from ignominy, but Fabio Capello has managed inflated expectations rather well so far. Meanwhile, Manchester United maintained their own soaring standards in winning the Premier League and reaching the final of the Champions League. The presence of the imperishable Ryan Giggs was just one of the reasons for saluting their excellence.

The very mention of excellence takes us to the great ones. There was Tony McCoy, who rode his 3,000th National Hunt winner in February to crown a career of nerveless skill and relentless self- sacrifice. And Roger Federer, who overcame Andy Roddick in a Wimbledon classic to win his 15th Grand Slam. He will serve down the ages as a definition of sporting class, a benchmark if ever there was one for aspiring talents like Andy Murray.

Then there was the year’s most haunting might-have-been. Tom Watson clambered from history’s pages to remind another generation of his genius. He came within one clumsy putt of winning the Open, and writing the sports story of the decade.

So it was a good year, a year which reminded us of sport’s enduring capacity to bring the best out of the people who practice it. For some of us, the most thrilling moment of 2009 was the sound of the final whistle in Cardiff, when Ireland’s first Grand Slam in 61 years became reality.

Declan Kidney, the gentle, scholarly coach from Cork, was asked for his reaction. All around him, large men were weeping with joy, fireworks were exploding, anthems blaring. And this is what he said: “I’d especially like to thank all the guys who coached these players at school, and gave them what is sometimes unseen – a love for the game. Unless you have that, you don’t stick at it. In sport, you’re always going to lose more than you win, and to stick at it you have to have real desire. I’m very grateful to the people who gave them the desire.”

In those few, thoughtful phrases, he returned to the roots and defined the nature, the purpose and the glory of sport. It was a message to cherish from the year of ’09.

□ Collins is a record-breaker in his own right – his 2008 SJA Sports Writer of the Year accolade being his fifth. He wrote this article for no fee for the SJA’s 2010 Yearbook, a key benefit of membership of the Association, which is being distributed to all SJA members this week.