VIEW FROM THE PRESS BOX: England go to Thursday’s second Test all-square in the Ashes series after a dramatic finale in Cardiff on Sunday. PHILIP BARKER looks back to previous Lord’s Tests against Australia and an unlikely hero

The batting heroes of Sunday, Monty Panesar and James Anderson, have never claimed for themselves the prowess with the wand that Kevin Pietersen possesses. Nor, thankfully, did they, or Paul Collingwood, try to play “that shot”, as KP had done in a England first innings of wasted opportunities last week.

Indeed, the stubborn obduracy demonstrated by Panesar, Anderson and Collingwood, and the bravery under fire from some hostile, short-pitched Aussie bowling of Graeme Swann, was in many ways reminiscent of an earlier age.

Tony Greig is, like Pietersen, another controversial South African figure who once captained England. On Sunday, Grieg joined the chorus of criticism on BBC Radio 5 Live, with advice for Andrew Strauss and the selectors on how to deal with KP. “If you play any more shots like that, we’ll have to seriously consider giving someone else a go,â€ Greig said.

â€œSometimes you have to take a firm stance with these players and I think Pietersen might fall into that category.â€

When Greig became England captain before the Lordâ€™s Test in the Ashes series of 1975, he unexpectedly chose a man for his side who would surely never have played such a shot.

Yet by the end of that year, David Steele of Northamptonshire

was to become the BBC’s Sports Personality of the Year and officially a national treasure.

The bespectacled, grey-haired Steele, pictured above right, was given his Test debut, aged 33, after England had lost the first Test by an innings and Mike Denness had been sacked as captain.

When Steele walked out to bat, it was a hot steamy July morning, and England were in trouble at 10 for 1. Indeed, after the fall of that first wicket, Steele took some time to emerge â€” perhaps nervous, heâ€™d taken a wrong turn in the Lord’s Pavillion and ended up in the basement. When he finally got to the wicket, he could only watch from the other end as the situation deteriorated to 49 for 4 as John Edrich, Dennis Amiss and the young Graham Gooch followed Barry Wood back to the dressing room. Dennis Lillee took all four wickets in an inspired opening spell.

Steele, his cap – no helmets then – worn slightly askew, was joined by skipper Greig and together they put on 96 for the fifth wicket, every shot cheered to the echo. Steele was finally out after nearly three hours for 50, bowled by Jeff Thomson. For Ian Wooldridge he was, â€œa man who got up that morning and said that life has nothing more to offer than to play for Englandâ€.

Tony Lewis summed up the mood. â€œMore than anything, he is recognised by professional players as a man of heart and determination.â€

When he was dismissed, Steele came in to a standing ovation from the MCC members, and he even got to meet the Queen at tea time.

Thanks to Steele’s determined innings, and Greig’s combative 96, England were all out 315. At one stage, they had the Aussies on 81 for 7 before Ross Edwards led the recovery with 99, aided and abetted by Lillee with 73. The match eventually petered out into a draw, although Steele had carved his place in British sporting history. By the end of the series, in which he faced one of the most hostile bowling attacks ever seen in Test cricket, Steele’s batting average was hovering over 60. In the memorable words of The Sunâ€™s Clive Taylor, Steele was â€œeveryoneâ€™s idea of the bank clerk who went to warâ€. 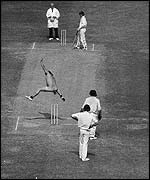 â€œIt had been noted with distress that some members at Lordâ€™s were removing their jackets in the Long Room. This chap from the Tavern area went a good deal further.â€

His name was Michael Angelow, and his mode of dress wouldnâ€™t have been out of place in the painting on the ceiling of the Sistine Chapel. He was of course the first streaker seen at Headquarters (pictured left).

Nothing could beat John Arlottâ€™s description of this classic Ashes moment on Test Match Special. Arloot’s use of the term â€œfreakerâ€ came courtesy of a misheard comment from Trevor Bailey.

â€œAnd weâ€™ve got a freaker and itâ€™s masculine and itâ€™s seen the last of itâ€™s cricket for the day. Heâ€™s being marched down in front of the grandstand in the final exhibition.â€

England need to put on a cricketing show at Lordâ€™s later this week, but the omens are not good.

Not since 1934 have England beaten Australia at Lordâ€™s in a Test match. The best performances since have at most ensured a draw and have often needed some benevolent rain just to make sure.

1938 Wally Hammond struck an imperious 240 for England , but they still couldnâ€™t force a victory. Australia’s reply was founded on 206 from opener Bill Brown. Don Bradman hit an unbeaten century in the second innings but Australia ran out of time.

1953 In Coronation year, England were up against it. Trevor Bailey joined Willie Watson at 73 for 4 with five hours still to play and not much batting to come. Watson hit a century in a match-saving stand.

1964 A draw was inevitable after the first two days were wiped out by rain. John Edrich hit a century in Englandâ€™s only innings.

1968 The 200th Anglo-Australian Test made the front page of The Times when Englandâ€™s bowlers destroyed the Australian batting for 78 . Colin Milburn entertained the crowd with a lusty 83 but as Wisden noted, the match â€œwas spoiled by the weather, rain reducing the playing time by half, fifteen hours instead of thirtyâ€.

1977 A break with tradition in Silver Jubilee Year, this was the first Test of the series. The late Bob Woolmer top scored in each innings for England and made the first century of the series, but even Mike Brearleyâ€™s inspired captaincy could not force the victory this time.

The Ashes werenâ€™t at stake in the rain-ruined Centenary Test. On the last afternoon John Arlott, pictured right, completed his last spell of Test match commentary in typically understated style: â€œAnd afterTrevor Bailey, it will be Christopher Martin-Jenkins.â€ An announcement was made over the Tannoy and Geoffrey Boycott, en route to a century, joined the Australian fielders in applauding Arlott’s departure. The match was drawn.

1981 Ian Botham captained England to a lacklustre draw. Out of form, when he scored a pair, he was greeted on his return to the Pavilion by the cold shoulder from MCC members. He resigned the England captaincy at the end of the match. The rest is history…

1997 England had won the first Test emphatically but were brought back down to earth by a magnificent spell of 8 for 38 from Glenn McGrath. England were bowled out for 77. England saved the match with some sturdy second innings batting from Mark Butcher and Mike Atherton, but in reality it was the rain which saved the day.