Psst! Pest alert: I am wearing my Victor Meldrew hat in this post-World Cup week.

Lionel Messi, Player of the Tournament? I don’t believe it. 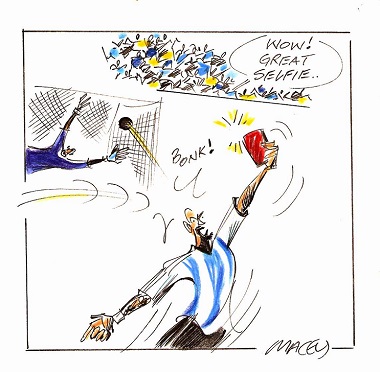 Even Messi would not have picked Messi.

Colombia, the Fair Play Award? I don’t believe it.

Wasn’t it a Colombian whose knee broke the back of Neymar?

Sports editors should order an investigation of the FIFA committee that made these decisions. Of course, any findings would underline that it all had nothing to do with the trophy sponsors, Adidas.

The common denominator of all the award winners? They have Adidas contracts. The goalkeeper of the tournament award went to another Adidas-clad player, Manuel Neuer.

But of course, FIFA – and Septic Bladder – would not get involved in doing anything underhand. I see that Blatter agrees with me on the Messi award, and when I find myself on board with anything to do with the FIFA chief then I wonder if it’s time to hang up my quill.

That’s another fine Messi you’ve got me into. See you in Qatar.

AS A SENIOR (some would say senile) observer, I was continually asked if this was the greatest World Cup of them all. I did not miss a single game on the box, and am now suffering World Cupitis.

It was possibly the most exciting and entertaining of all the World Cup tournaments, but there was one thing missing: a truly outstanding team.

I was in Mexico in 1970, and for me those finals remain the benchmark. There was plenty of thrilling action, and there are a cluster (I almost said cliché) of old sportswriters who still consider the semi-final between Italy and Germany the most exciting game they ever covered.

And in champions Brazil, the 1970 tournament gave us arguably the greatest team ever to parade on a football pitch, and so superior to the 2014 Brazilians that you could see the space between them from the Moon.

Here’s a comment that will irritate and depress the newspaper match reporters returning from their duty at the football front in Brazil: you were completely dwarfed by the television and radio media, and the public were more interested in writing about the finals than reading your views.

Twitter and Facebook reported record traffic during the finals, with 500,000 comments a minute being posted at key match moments. Per minute!

The new high was set in the final, when 618,725 tweets a minute were hitting the internet. All of them posted by writers with an opinion, not readers.

The World Cup did nothing to boost dwindling newspaper circulations. The all-knowing Press Gazette made grim reading with these June ABC circulation figures, showing only The Times with a slight increase. 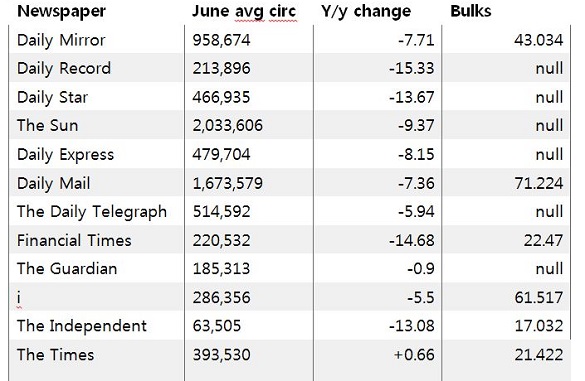 Our newspapers can be considered in as great a crisis as the England football team. We’re good at telling Roy Hodgson how he should manage. Now, where are the managers who can steer our newspapers back to winning ways?

THE PASSING OF THE former Sunday Mirror sports editor Tony Smith gives me the chance to repeat an experience we shared that he described as “the biggest disappointment of my career”.

It involved the greatest scoop I never had.

We go back to the days when I was in partnership in a sports agency business with fondly remembered journalist and entrepreneur Peter Lorenzo. The two of us were closer than most to Sir Alf Ramsey, and when he got the sack as England manager in the spring of 1974, we put him under lock and key.

First, we put out a smokescreen that he had gone off to Spain to consider his future, while all the time he was tending his beloved garden at his modest home in Valley Road, Ipswich.

Then Peter and I sat with him for hours, tape recording his memories of managing England and his running battle with the frugal FA, who rewarded his services with the less-than-golden handshake of £6,500.

We assured Alf that we would get him four times that amount for the newspaper serialisation of his story, this at a time when £25,000 could buy you a decent semi-detached house.

I burned the midnight oil to get Alf’s memories down into three parts, 4,000 words each chapter. Then I packaged it in those pre-computer days to look as professional as possible (any soon-to-be-redundant journalist ought to remember that packaging and presentation should be a major priority when selling stories or ideas).

I talked Peter into letting the Sunday Mirror have first bite. I thought I owed it to Tony Smith, who was first to give me freelance work when I quit my job as chief football reporter of the Daily Express to – yes, I was this pompous – make something of myself.

The excitable Smithy was all but dancing on his desk when we gave him – in signed-for confidence – a look at the bullet points.

He went “upstairs” and 10 minutes later came down with an opening bid of £20,000. We told him that we had promised Alf four times his redundancy pay-off.

I am glad to say that we gave Alf the sort of help that so many axed journalists could do with today.

Once we had agreed the deal with Smithy, we let him read the full serialisation. I sat facing him as he went through it with an excitement that could be measured on the Richter scale. At the end of every page he said, “This is fuckin’ brilliant, Norm … fuckin’ brilliant …”

As he reached the end of part two, he called in his gifted and trusted No2, Dave Ellis, and said in his Cockney tones: “Get a smudger down here to take a picture of Norm. We’re going to put his mush on the back page this Sunday. We’ll knock spots off the opposition…”

The words were hardly out of his mouth when he was summoned back “upstairs”.

Ten minutes later he came back ashen faced and looking like a man who had been hit by a bus. “The fuckin’ bastards have taken it away from us,” he said quietly, struggling to get the words out. “They have got a push on for the People and they’ve got to take it.”

The story was serialised by the Mirror‘s stablemate and run under the byline “Exclusive by Mike Langley”. Mike was one of the finest football writers of his generation, but he had as much to do with that story as I had in helping Mario Goetze score his World Cup winning goal.

And I never did get my picture on the back page of the Sunday Mirror.

Tiny Tony was not down for long. “Come on darling,” he said. “Let’s go to the Stab and have a pint. Fuck Alf Ramsey!”

Good old Smithy. They definitely don’t make them like him any more.