Millions spent many hours in front of their televisions to watch the World Cup. But who won the Big Match: the BBC or ITV?

Which of the two gave viewers the better service? Who were the best presenters? Which fielded the most articulate pundits before, during and after each game? 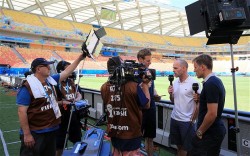 The Media Society has managed to gather a panel of current and former television sports executives to discuss television’s coverage of the World Cup next Wednesday, July 23, at the Adam Street Private Members’ Club off the Strand in central London. Entry just £5.

Kick off is 6pm for 6.30pm. To book in advance, go to eventbrite (simply register as a student to receive the discount). Or you can pay at the door.