NORMAN GILLER laments the passing of another friend and colleague

Sometimes there is a collision of coincidences that leave you feeling numb. That’s how it was for me with the passing on Tuesday of that exceptional football reporter and fine man, Brian Woolnough.

I was typing a chapter in my upcoming book on Bobby Moore that focuses on the England master’s submission to bowel cancer when an email arrived from SJA secretary Steven Downes. It informed me with great regret that Wooly had lost his battle against the same curse that had beaten Bobby.

The news knocked me sideways because the paragraph I had just completed read: “I am one of the lucky ones who has benefited from the research financed by the Bobby Moore Fund, and I came through an operation that has (so far) cleared my bowel cancer. All the profits from this book will go to the Fund to help with the fight against one of the most brutal of all the cancers.”

Wooly did not share my luck and left us at the all too young age of 63. I know I speak for every SJA member when I pass on our deepest sympathy to his widow, Linda, and their three children. Brian is certain to have an emotional send off at his funeral at Christ Church, Esher, on Thursday week.

I had always taken a keen interest in Brian’s career from the day soon after joining The Sun in the 1970s when he told me a little shyly that I had been his role model in my time as chief football writer on the Daily Express. I was flattered but told him he could do much better than me, which he did to the point where he had legendary status among his peers.

We appeared together several times on Hold the Back Page, that he presented for Sky before it morphed into Sunday Supplement. He showed what a superb television professional he had become by holding the programme together when his co-presenter, the ageing Jimmy Hill, started to get lost in a confused maze.

The last time I saw Brian was at the FA Cup semi-final between Chelsea and Tottenham at Wembley in April. As usual I teased him by saying he was looking more and more like Tommy Cooper’s twin.

He was already showing the signs of his developing illness but continued to work with a professionalism and a pride that earned him a place in my recent Top 50 Sportwriters list. Just like that.

Brian reminded me of my last appearance on Hold the Back Page in the company of the master Hugh McIlvanney. “We should have you two on Sunday Supplement,” he said. “The golden oldies don’t get enough of a say on the show.”

Brian had become a Golden Oldie himself, the doyen of the press box. He will be greatly missed. A true daily star.

It becomes even more painful to accept Brian’s departure so soon after the loss of his Daily Star team-mate Danny Fullbrook, who was a victim of cancer at just 40.

The Football Association showed grace and imagination in naming the Wembley media room the Danny Fullbrook Lounge, and it followed on closely to a similar honour for another Fleet Street master.

The majority of the 6,000 accredited members of the world’s media who worked at the Main Press Centre at the Olympic Park during the London Games will have filed copy from the John Rodda Press Workroom. Many will have also had a glass in the Steve Parry Bar – the Sports Journalists’ Association lobbied that two of its recently departed Olympic star writers should be commemorated at the London Games. 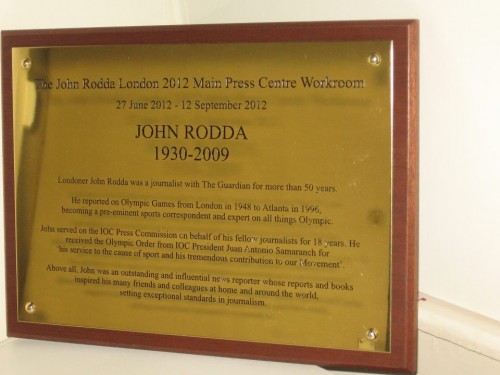 When the wonderfully charismatic Rodda, the Guardian‘s respected athletics and boxing correspondent across nearly four decades, died in 2009 at the age of 78, LOCOG chairman Lord Coe spoke of his “great sadness” that John would not be around to see the Games return to London.

Rodda, a walking record book on both the sport and the politics of the Olympics, played a vital role in advising Coe how to negotiate the corridors of power. Few journalists in the world could match his knowledge and his contacts.

So how fitting that the name of John Rodda, who covered every Games between 1960 and 1992, will live on in London through not only the press room but also a plaque that summarises his great career.

He started writing with the Dixon’s news agency in 1948, the year that Brian Woolnough was born. Both became reporting giants and for me it was a privilege and a pleasure to know them both and count them as friends as well as colleagues. They represented our much-maligned profession with dignity and style.