This week saw “hacking” used in an acceptable sense, as Peter Corrigan’s website was launched to appeal to anybody who has ever wielded a golf club with anger, agony or false ambition. I come into all three categories.

You will find it the wittiest and wisest golfing blog on the internet as Peter carries on The Hacker column that has amused and informed Independent on Sunday readers since the end of the last century.

I deliberately use the “last century” phrase because Peter is still – after decades of divot demolition – gallantly trying to break 100 for the first time in competition play.

He is exactly the sort of player that the SJA’s Golf Days warmly welcome. I am told by a little birdie (not something you often hear about at SJA Golf Days) that this year’s SJA Spring Golf Day is to take place at Surbiton GC on Monday April 16 – booking details to be announced on this site shortly. It’s  the sort of event which will provide Corrigan with perfect material for his new online home. Sports journalists on the golf course putting action where their mouths are   gives a whole new meaning to that suddenly sordid hacking word.

By going online, Corrigan will undoubtedly be looking for more hacking tales. He has been dragged kicking and screaming from the pages of the IoS to a new home on the internet, where I guarantee nobody will be able to match his fairway (okay, rough) experiences and his self-mocking humour that has entertained newspaper readers for the little matter of 60 years.

Peter and I go back a long way on each other. We were team mates on the long-gone Daily Herald back in the early 1960s before it morphed into the broadsheet and then tabloid Sun.

His emergence as a new boy on the blogging block gives me the opportunity to revisit some classic Corrigan tales. First, his half exclusive in the summer of 1965. He got a tip-off that Wolves were appointing Les Allen as their new manager in the wake of the sensational sacking of Stan Cullis.

The first edition was due off the stone, and so Peter dashed into print before he could make the proper checks. Next day came confirmation that Allen was indeed being appointed the new master of Molineux … Ronnie Allen. “Oh well,” said Peter through his chagrin, “I was half right.”

We move forward two years to the Arab-Israeli war of 1967 for the facts of my second corrugated Corrigan anecdote.

Now I have seen other versions of this story, borrowed to dress up invented stories. This is the true, original version.

The England under-23 summer tour that year coincided with the Six-Day War, and at the height of hostilities the squad was briefly stranded in Bulgaria. There were16 players, six doddery members of the FA blazered brigade, trainer Wilf McGuinness, manager Bill Nicholson and seven of Fleet Street’s finest football writers. I would say that; I was one of them.

Peter is the central character in the story, a few years ahead of becoming the highly regarded sports editor of The Observer and certainly one of the matchless journalists of my generation. At that time he was reporting for the broadsheet Sun two years before it become the tabloid toy of Murdoch.

As the war reached its peak, it suddenly became impossible to make telephone or telex contact with our London offices. I was earning my daily bread at the time with the Daily Express, and along with my colleagues I sat fretting and frustrated in the team’s hotel headquarters in Sofia as the edition deadlines for our copy approached and disappeared into the distance.

In those Cold War, non-STD days you had to order your telephone calls through the hotel switchboard, and we were informed that all lines were down. You have to remember the mood at the time. There was wild rumour of Russia getting involved and nuclear weapons being used as Israeli tanks and jets destroyed the combined forces of Egypt, Jordan and Syria. We agreed among us that if anybody should be lucky enough to get through we would put over a shared story that could be distributed at the London end.

After two days of total silence, it was Peter who suddenly got the desperately awaited call and found himself being put through to The Sun sports desk from the lobby of the hotel.

It was an appalling line and he was reduced to screaming “Peter Corrigan” into the mouthpiece in a bid to make himself heard at the other end.

The rest of us were gathered around, willing him to keep the precious line open. We couldn’t believe it when he suddenly threw down the receiver without having dictated a word.

On the other end of the line had been a veteran sub-editor with a pronounced stutter. Peter, tearing out what little hair he had left, looked at us wild-eyed and said: “Ive just been told that P-P-Peter C-C-Corrigan is in B-B-Bulgaria, and then he put down the phone and cut me off.”

It was around about then that the Daily Mail’s exceptional chief football writer Brian James was overheard making the dismissive remark: “The No2 football reporters these days are such an insignificant lot.”

Instead of getting angry and precious we No2s were highly amused, and at an impromptu meeting agreed to form a club called The Insignificant Seven. We took it very seriously and had a special tie manufactured by Spurs maestro Dave Mackay (his sideline: he had the sports market tied up). 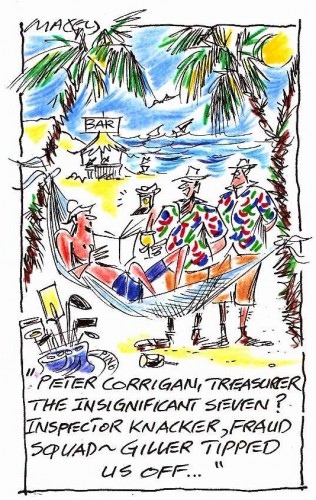 Sadly, our little club fell apart because too many insignificants proved themselves somewhat magnificent in the pursuit of the written word. To this day I have been threatening our dishonourable treasurer Corrigan with legal action, because when the club folded there was to my certain knowledge seven shillings and sixpence still in the kitty. Time for a share out of that 37.5p, Pete.

One last Corrigan tale. We both harboured ambitions to become comedy scriptwriters, and we got ourselves a top agent in Ted (Voice of Them All) Kavanagh. This was circa 1966, when one or two things were happening on the football front as something of a distraction.

There was a comedy series on ITV at the time called Mr Aitch, starring Harry H Corbett in the lead role, not as a rag and bone man as in Steptoe and Son, but as a Cockney spiv (it always amused me how a Wythenshawe, Manchester boy could be passed off as a Cockney).

It was the first sit-com ever produced by an independent company, and was brilliantly scripted by the masters Ray Galton and Alan Simpson. The independent company, run by a Mr Aitch-type character called Johnny Arrow, hit funding trouble and could no longer afford the great G&S team.

Arrow was pointed in our direction, and he said he wanted one full script and seven synopses for the rest of the series before the end of the week. He told us this as we sat swanking in the back of his Rolls Royce, feeling like the next Galton and Simpson, but more like Bart and Homer Simpson. We were suitably seduced.

Peter and I were each paid 50 quid up front and spent the next day in Harry H. Corbett’s bedroom. His latest lady sat in bed alongside him while we ran through a shaft of ideas.

By the end of an exhausting week we had a full 30-minute script written about Mr Aitch running London’s buskers as if he was Lew Grade; there were also seven outlines for the rest of the episodes.

We took the scripts to Johnny Arrow’s office only to find it locked. The production company had gone bust and Mr Arrow disappeared from our lives.

As with all good comedy, there was a punchline. A month or so later Clive Toye resigned as chief football reporter on the Express to become a soccer pioneer in the United States. I was promoted to his role, and my pal Peter Corrigan was interviewed for the job that I vacated and which was later filled by Steve Curry.

Years later, I asked sports editor John Morgan why he had not given Peter Corrigan the job. He drew heavily on his Mr Aitch-style cigar, and said: “Clive Toye tipped me off that if I appointed Corrigan to work with you, all you’d be interested in was writing comedy scripts.”