STEVEN DOWNES reviews one of those rarities in sports publishing: a humorous book which is genuinely funny

This weekend will properly demonstrate how sport can go from the sublime to the ridiculous, barely pausing for breath along the way. This evening, Chris Robshaw will lead out the England team at Murrayfield, the captaincy of his national side the apogee of a rugby player’s career. 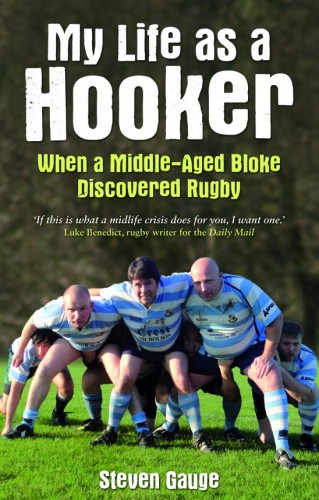 Then, tomorrow lunchtime in the members’ bar at Robshaw’s first club, Warlingham, on the outskirts of Croydon, there will be a launch party for a sports book: My Life As A Hooker.

Steven Gauge’s book title must be a delight for publishers Summersdale in this age of easy click Amazon sales, as I am told that the market for Belle de Nuit material remains vast. The market for comedy books about sport is somewhat less so, though Gauge’s efforts deserve to correct that in the coming months.

But the sub-title also serves as a perfect summary of this autobiographical traipse through a mid-life crisis and weekends with the third worst team in Surrey.

I ought to declare an interest at this stage. I am in this book. It is a fleeting appearance, in keeping with my brief display on a rugby pitch alongside Gauge. After the second match, I was persuaded not to play again: having myopically managed to concuss our team’s best player with the first headbutt of my life, it was suggested that I was too much of a danger to my own side.

I had been lured into thinking I could even contemplate taking to the rugby pitch by the personable Gauge, who happened to be coaching my younger lad in the under-12s on a Sunday morning. He somehow mentioned in passing that he spent his Saturday afternoons captaining the seniors’ 4th XV. The 4ths was a relatively new side at Warlingham, set up by Gauge especially for those who, according to his own motto for the team, “don’t give a sh*t about being sh*t”. It sounded ideal.

Since Gauge’s rugby career has lasted a good deal longer than two games, he is able to recount in full life in the casual nether reaches of British sport. It is a world that is light years away from Premiership football, and pretty far removed even from life in Warlingham’s 1st XV in the ninth (or is it eighth?) rung of English rugby.

It is a much more real, and warm world, apart from Saturday afternoons in January, a world where most of the changing rooms have a unique odour, a bizarre mix of Wintergreen and diarrhoea which is guaranteed to make your eyes water – not a good look just before you run out to play in the rough and tumble world of fourth team rugby.

It is 50 years since Michael Green published his Art of Coarse Rugby, one of the rare sports comedy books that fulfilled both sides of its remit. That book made me laugh out loud, and Gauge’s book did so, too.

That might have  something to do with Gauge’s descriptions of some of the characters he had encountered along the way, some of whom Gauge has opted to change their names for the purposes of this book. If this has been done on the basis of libel advice of some sort, then Gauge had better engage another solicitor, because his descriptions of “Smudger” and a game of musical beds when on tour in Paris, or of referee “Hamish McKilt”, are hilariously recognisable, and thoroughly actionable.

Gauge has a tidy line in self-deprecation throughout the book, so the fact that he used to be chief executive of the Suzy Lamplugh Trust, or that he managed Nick Clegg’s campaign at the last general election, or that he once used the word “Existentialism” as a line-out call get barely a mention.

Humour, though, is a notoriously difficult thing to judge, and probably more difficult to write. So you may want to read this sample passage, about the aforesaid Scottish referee, to judge for yourself.

Very occasionally Hamish went the extra mile to ensure harmony on the pitch. In one game we were playing a side called London French. There are a number of sides in London with historical links to other countries or counties, including London Cornish and London Irish. Many others have links to schools and universities. But with falling player numbers most clubs will take anyone who wants to play regardless of nationality or old school tie.

London French’s lower side didn’t appear to have any French players whatsoever but Hamish refused to acknowledge this aberration. He took great pains to offer his judgements and rulings in both English and very poor sub O-level French. As his grumpiness grew throughout the game and his angry Glaswegian/Gallic instructions grew louder and louder, he ended up shouting violently in fluent Franglais at the opposition captain: ‘Penalty pour les mains dans le ruck… Retournez dix metres maintenant or else c’est le sin bin pour vous.’

Eventually the London French skipper replied, ‘I’ve no idea what you are saying, mate, I’m from Fulham.’

In between providing media training for Macedonian political parties, Steven Gauge is still turning out for the Warlingham 4ths most Saturdays, but he’s no longer captain. The team has been promoted two seasons running and are no longer the third worst team in Surrey. But I doubt very much whether it is quite as much fun as depicted in My Life As A Hooker.