Back-page heroes and front-page rogues: after the latest revelations about Wayne Rooney’s sex life, NORMAN GILLER reflects on the perils of being a football reporter then and now

Could I be sacked retrospectively for failing in my duty as a newshound back in the day when I was earning my daily bread as a football reporter? I sat on stories that would make this week’s revelations about Wayne Rooney seem about as tame as the Teddy Bear’s picnic.

There was the time I hid in a wardrobe with two international footballers while a couple of their team mates were, uh, servicing an air stewardess, a member of the charter plane crew who had flown us out for a midweek European encounter.

Then there was one of my best mates – an England player admired throughout the land – who told me in confidence how he would drop in to see a married woman for, uh, tea and crumpet on the way to home matches. Hardly the sort of pre-match preparation you’d expect, then or now.

I am sharing this with you not for sensations sake or to expose myself as being a flawed reporter, but to underline that sex-and-soccer-stars – sex and anybody – has been going on since time immemorial (or even immoral).

The difference now is that there is a tabloid trade in writing about it. In my day (stop yawning at the back there) we knew what players got up to, and we respected their privacy, provided what they were doing did not interfere with their football.

There is as much chance of me revealing the names of the players (and managers) with whom I have shared fun nights as Andy Coulson admitting he knew about the phone tapping while Editor of the News of the Screws.

Ask any well-travelled football reporter from my generation and he (they were all “he”) will confirm that many of us acted as the scouts on overseas trips. Once the game was over, the players would follow us to the nightclubs that we had tracked down the previous evening.

Now reporters get nowhere near the players, at least in part because trust has gone out of the window. Who’s got a hidden camera? Who’s taping this? Who’s on his mobile to the office?

I remember, on a trip to Sweden with a major club for a Uefa Cup tie, their star player making the flight home at the last second with two gorgeous blondes clinging to him like nymphet limpets.

On another plane trip – in Mexico during the 1970 World Cup – England centre-forward Jeff Astle got paralytic and had to be helped off the plane. Foreign photographers snapped him staggering down the steps to the tarmac. We, the great British press, went along with the Alf Ramsey story that he was suffering from flight sickness.

The good old, bad old days
All the football reporters from my era will have George Best tales to tell. It is well known that the then United manager Wilf McGuinness had to drag him out of a girl’s hotel room bed on the afternoon of a crucial cup tie.

And I recall lovely Wilf – far too nice for the managing business – being summoned to an east European hotel nightclub in his pyjamas in the early hours. The hotel manager complained because four of the England under-23 team, of which Wilf was the trainer, were in the lewd company of a group of call girls squabbling over who was going with whom.

Not a word of it made it into the newspapers. Hang my head in shame? No, I didn’t want cheap headlines, and I can still talk to any of those former players and have a good laugh about the good old, bad old days.

A man of honour, or a disgrace to my profession. You be the judge.

Today, players go to court to protect themselves.

As I write, three prominent footballers – and Wayne Rooney is not one of them – have super injunctions out trying to prevent newspapers revealing stories, or pictures, from their personal lives. Most of the facts have appeared on the internet dressed up as gossip. 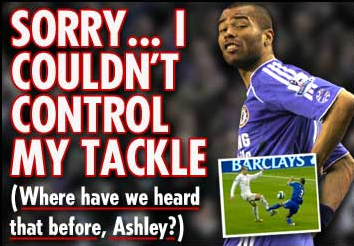 Some of the damage is self-inflicted – think of the Ashley Cole mobile phone material earlier this year.

Another thing to remember is that much of the more salacious stuff tends to be generated by reporters working at the front-end of the newspapers: us sports journalists realise that we will be expected to work with these same players the day after the front-page headlines appear.

Footballers – any celebrities – just cannot do as they please any more. There are prying eyes everywhere, and the internet has become the foulest gossip conveyor belt of all time.

Facebookers will tell you that they were reading about Wayne Rooney and his extra-marital activities long before the story was splashed in Sunday’s newspapers (with a squabble between the News of the World and the Sunday Mirror as to who was first to sprint into print with it).

Anything goes online. A lawyer pal tells me that every time he trawls the internet, he sees dozens of instances of slander and libel.

I also understand that Sue, Grabbit and Run are looking for a high-profile test case to see if they can make an online prosecution stick. The difficulty is in tracking down the perpetrators, most of whom hide behind pseudonyms and give false contact details.

Wayne’s World has become an aggravation for his publishers. His books have sold like cold cakes, giving a poor return on his reported £5 million advance.

I’m glad I’m not in the shoes of Hunter Davies, the gifted ghostwriter of the first volume of the Rooney memoirs.

Imagine the phone calls: “What you been doing today, Roo?”

“Well, Hunter, I trained for an hour, dozed through the gaffer’s tactical talk, drove to a local hotel and had a two in a bed with these couple of prossies and then went home and patted Coleen’s pregnant tummy …” Or maybe not.

HarperCollins – Rooney’s publishers – have had quite a week, what with winning their case to publish the autobiography of The Stig of Top Gear fame.

As the devisor of the BBC2 series Petrolheads, I knew the identity of The Stig long ago. There were newspapers who would have paid me for the name.

But I am from the old school of reporters. I don’t kick and tell (Ed’s note to Uncle Norm: Mind the halo doesn’t choke you).