As grown football reporters almost wept at the return of Jose Mourinho to the Bridge of Sighs, I got to wondering which managers from “my time” could have matched him as a quotes factory.

I have been living in the past (so what’s new?) since stumbling on my 1966 World Cup finals press pass at just about the time that the Special One was telling us he is now the Happy One.

Which managers from those Swinging Sixties could have filled notebooks like Loquacious Jose does for today’s back page scribblers? Believe me, we were spoilt for choice.

Here are my top six quote kings in reverse order:

6. Bill Nicholson
You had to be patient with Bill Nick. He would start most interviews by saying he had nothing to say and would then talk from the soul about the game he loved. Bill was at his most quotable in defeat and would show no mercy to any player he felt had given less than 100 per cent. Quote following a Spurs defeat at Crystal Palace in 1969:

“I can forgive anything but lack of effort. Today there were some players who should feel ashamed of their performance. I will not tolerate anybody giving less than their best. It is an insult to our supporters.”

5. Alec Stock
Football’s old fox was a master at using the media to put pressure on the opposition, and also of geeing up his own players. And sometimes he would say things with a poker face, not letting on that it was you, the reporter, he was winding up. Discussing his laid-back style of management, he told me:

“I don’t want ‘yes’ men in my team. I want players who will stand up to me and tell me if they think I’m wrong. I want them to be real men. Oh yes, and they must shut up when I’m talking.” 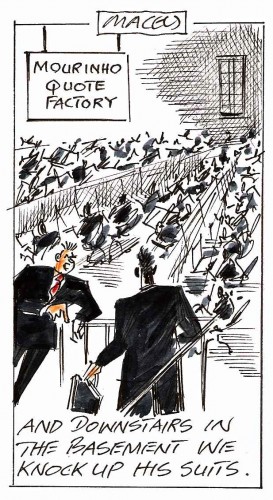 The most creative coach of his generation, Big Mal was a flamboyant character who often went deliberately over the top with his comments to grab the headlines. He was ghosted during his peak years by a young writer called James Lawton, a deadly mix. When he worked at Vitoria Setubal in Portugal he was watched closely by a young coach called Jose Mourinho. Much has rubbed off.

Big Mal once gave priceless advice to 16-year-old Bobby Moore: “Always ask yourself, ‘If the ball comes to me now what shall I do with it.’”

Please pass that on to England’s Under-21 footballers, who seem about as comfortable with the ball as a virgin on a first date.

3. Tommy Docherty
The Doc was a football reporter’s dream, always with something positive, usually humorous and often controversial to say. When he was on a shortlist of two with Vic Buckingham for the Chelsea manager’s job in 1961 he told the board at his interview:

“Appoint the other man and you will not get a coach but a hearse.”

Tommy got the job.

2. Bill Shankly
Shanks was a quote machine who has gone down in Liverpool folklore as much for his tongue as his managerial achievements. Books of Shankly Sayings have been published, and my former Daily Express stablemate John Keith brilliantly created a stage show based on Shanks’ life and times.

I was at Anfield the day Pat Jennings saved two penalties in 1973, first from Kevin Keegan and then from Tommy Smith. Shankly told me, almost in an accusing tone:

“Have you seen the hands on that Pat Jennings? They are like shovels. Should not be allowed.”

1. Brian Clough
Surely No1 in anybody’s book who encountered the eccentric, egocentric, engimatic and marvellously entertaining Cloughie when he was at his peak and not lost in the bottle. He and our mutual friend Brian Moore used to call each other “the other Brian”. After I had delivered the eulogy at the master commentator’s funeral, Cloughie told me:

“Young man, you did the other Brian proud. This Brian won’t be far behind him, and when I go God will have to give up his favourite chair.”

Get a reminder of how forceful and compelling Cloughie could be here as he gives a young John Motson the most uncomfortable interview of his life:

He would make Mourinho seem shy, modest and dull in comparison.

WHEN I FOUND my 1966 press pass it was tucked in my contacts book of the time. Not writing this to boast but just to pinpoint the different rapport football reporters had with the top people in the game compared with now. I had the home telephone numbers for every major manager and player, and there were no club PRs or agents to get in the way.

The book is pre-STD and there are district dialling codes, for example an ILFord number for Bobby Moore, Cheadle for Sir Matt Busby, UPMinster for Jimmy Greaves, Ipswich for Alf Ramsey and TOTenham for Bill Nicholson, who lived in a terraced house within walking distance of White Hart Lane.

I wonder how many reporters have got the home number for Mourinho?

If you call him on a Sunday at home will be still be the Happy One?