NORMAN GILLER congratulates Roy Hodgson and his team on a job well done, but reckons that the England football manager’s next task is harder still – finding some new talent

Mission accomplished. The boys are off to Brazil. Only superficial writers like me are unable to resist plays on “Boys from Brazil” on the road to Rio. 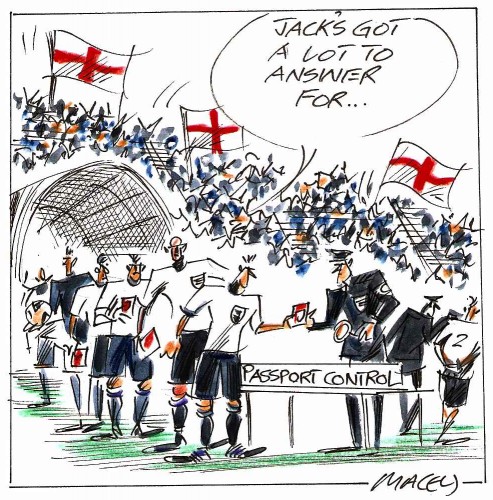 But time for a cold splash of reality. All responsible sportswriters have a duty to stress that this England team is just about good enough for the 2014 World Cup quarter-finals at the very best.

Somehow, somewhere, sometime soon Roy Hodgson needs to find a couple of talented players who can turn England from likely also-rans to serious contenders for the championship.

Unlikely? Well let me give you a history lesson.

When 1966 dawned, West Ham team-mates Geoff Hurst and Martin Peters had not kicked a ball for England. Between them, they scored all four goals in the final against West Germany (ok, three and a half).

Who will be the 2014-version of Hurst and Peters, yet to show on the England radar?

Those of us with Tottenham leanings could have told Roy ages ago that Andros Townsend had the pace and the power to trouble any defence. It was just a question of time that he broke through at Spurs after a series of confidence-boosting loan outings.

Now there is a little tongue-in-cheek concern at the Lane as to how soon before Real Madrid come knocking for him, following their swoops for Modric and Bale (remember him?).

Where, we are all wondering, are other Townsend types hiding? There’s Ross Barkley waiting in the wings at Everton, of course. Any other likely lads? Answers on a postcard, please, to Roy Hodgson at the Football Association, Wembley.

FOR ABOUT 40 MINUTES on Tuesday I felt I was watching a replay of the nightmare 1973 match against Poland. But the ghosts of miseries past were exorcised by Scousers Steve Gerrard and Wayne Rooney, and we found ourselves reaching for wit rather than the whip.

Top marks to The Sun for their “We’ve got a Brazilian … it was a close shave” front page splash. Much bristlier than my boys to Brazil line.

Yes, we’re laughing all the way to Brazil … but we need a couple of players who know how to put their foot on the ball and show control and composure.

A bit more history: the last time the World Cup was staged in Brazil in 1950, England came home in shame after defeat by the part-timers of the United States. Now that’s wiped the smile off your face.

SEBASTIAN VETTEL needs a top-five finish in India to clinch his fourth successive world title victory, but I find few F1 motoring correspondents or fans up their exhaust pipes with excitement.

The mechanical Vettel has turned the race for the championship into such a procession that it has become a bore for all but true aficionados.

Old gits like me with long memories will tell you that the greatest driver of them all remains Juan Manuel Fangio, who won five world titles in the days when the man at the wheel actually drove the car rather than the computer controllers on the sidelines.

This year’s race is nothing like as exciting and gripping as when James Hunt and Niki Lauda duelled for the title in 1976, the subject for Ron Howard’s excellent film, Rush.

The first person to put the Hunt-Lauda rivalry properly into the spotlight with a fascinating 1976 book was David Benson, colourful Daily Express motoring correspondent.

He was particularly colourful a year or so earlier when he got his nose broken by a punch from news reporter Keith Graves during an altercation in The Popinjay (or the “Poppins”), the pub alongside the Express building in Fleet Street.

Graves left the Express soon after to become a renowned BBC and later Sky foreign correspondent.

Tom Brown, then the heavyweight political reporter on the Express, took Benson to casualty at Guys Hospital, and for his trouble got covered in David’s blood. He put the replacement of his blood-stained shirt on expenses… under entertainment.

AS I WRITE THIS, tears are trickling on to the keyboard. Our cat Denzil (my partner Jackie’s best friend, ahead of me) went missing on Monday. Following hours of searching and worrying, we have just heard that he has been taken to the local veterinary hospital after being run over. He is dead.

I know this has nothing to do with sport, but Denzil is worthy of our tears and a mention in my blog. As any animal lover will tell you, it is like losing a member of your family.

Normal service will be resumed as soon as possible.