As Lord Leveson’s inquiry into newspapers, phone hacking and regulation continues, NORMAN GILLER believes that they are making a serious oversight: the back pages

Speaking on behalf of sports journalists, I am worried about the Leveson Inquiry. So far, where are the voices raised on behalf of the “Toy Department’ of newspapers?

In the four days of debate to date, sport has got as many mentions as taekwondo at a Women’s Institute meeting. 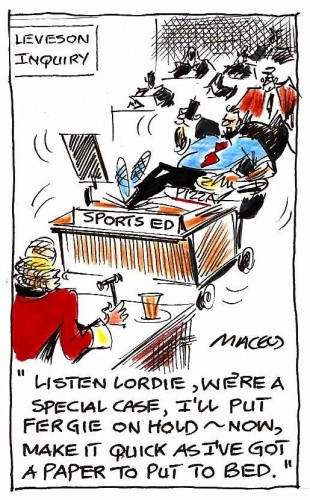 Down at the end of the long and grinding Leveson road there will be legislation that will affect every newspaper sports journalist in the land. Somebody, somewhere in authority must stand up and put the case for the back page brigade. Anybody with knowledge of the workings of what was once known as “Fleet Street” will confirm that sports reporting is a world of its own, often divorced from the way they do things at the other end of the paper.

It needs a sports editor – or at least a sports specialist – to join in the debate, so that Lord Leveson can hear and take on board the vast differences in running a sports department compared with news and features.

There is a different technique in acquiring a sports story to a news story. Invariably the reporter is getting information from somebody with whom they have an on-going relationship, whereas the news reporter will often be dropping in on a scene for just the duration of the specific story, rarely to return again.

Sports reporters have to go back to their sources time and again because sport is, relatively, a village world, and to keep contacts happy the stories often have to be slanted and sliced to suit and protect future dealings.

It should be the duty of every journalist – sport or otherwise – to follow in detail each step of the Leveson Inquiry, and if possible play a part by taking up the invitation for your personal input.

There is an overworked lady called Rachel Clark who is collecting and collating any opinions you may have on matters arising so far from the Inquiry. You can email her your views at rachel.clark@levesoninquiry.gsi.gov.uk.

The sessions so far have been riveting. You can catch up with them by clicking here. Of course, there are some boring bits, and I am concerned that Lord Leveson’s panel of assessors do not have sufficient inside knowledge of the workings of a newspaper. Even the redoubtable George Jones in his former role as Daily Telegraph political editor has no experience of hard-nosed foot-in-the-door reporting, and where is a voice for the all-important regional newspapers?

Lord Leveson refuses to add to his panel of assessors, perhaps because their £565 a day fees are eating into his budget. I will do it for half that, and clean his Lordship’s car at the end of the day.

If it’s entertainment you’re after, don’t miss Kelvin MacKenzie’s cabaret act in the afternoon session on Day 4. It could have passed for Live at The Apollo as MacKenzie took swipes at David Cameron, Rebekah Brooks, Andy Coulson and even the good Lord Leveson as if it were part of a new stand-up routine.

In full throttle, Kelvin – for whom The Sun no longer rises – highlighted that Leveson as a prosecutor could not even win a case against comedian Ken Dodd for tax fraud. Picking out a Liverpool icon was not very wise by Kelvin, given his Hillsborough background.

I wonder if anybody put the arm on him for this legal-sounding climbdown in his next Mail column?

“On reflection,” MacKenzie wrote, “I owe an apology to Lord Leveson, the judge heading the inquiry set up in the wake of the News of the World phone-hacking scandal.

“On Wednesday I made a speech to the hearing — with Lord Leveson only yards away — in which I was somewhat disparaging of his ability when, as a young QC, he failed to win a conviction for tax evasion charges against Ken Dodd.

“Before I delivered my speech, he was very courteous to me and yet I repaid him by being disobliging. I shouldn’t have done it and I am sorry.”

Well that’s a rarity, Kelvin MacKenzie saying: “I am sorry.”

Even funnier, in my view, was the Alastair Campbell reaction to Daily Mail chief Paul Dacre’s call for beefed-up self-regulation of the press and an ombudsman with teeth. Campbell, who was more a spin surgeon than spin doctor for Tony Blair, called Dacre’s contribution “self-serving, sanctimonious, hypocritical, dishonest” – in a sentence, all the things of which the Mail has accused Campbell in a long-running war of words.

Lord Leveson has what I consider an impossible job pulling all the strands together and trying to fathom who is speaking with vested interest or for reasons of revenge.

If I were having a say, I would implore his Lordship not to be so centred on the telephone hacking aspect of the inquiry that he misses the much bigger picture.

Newspapers will soon – possibly even in this old git’s (I will not say old hack’s) lifetime – be yesterday’s news. They are losing their readership and their authority by the minute to the new phenomenon of the interweb.

Many people no longer consider themselves “readers”; now, they think they are “writers”, “citizen journalists” or bloggers. The “man on the Clapham omnibus” has become the opinion-armed man on the internet beat.

Whether it is by blog, Twitter or Facebook, millions – yes, if not billions worldwide – are more interested in pushing their view rather than reading those in newspapers. Few read anymore. They are too busy writing, and often rarely more than 140 characters.

So what Lord Leveson must do is recognise this major change and make sure the bloggers and the Tweeters have to abide by the same laws as professional journalists. Otherwise, he risks killing off the regulated, professional and, mostly, responsible journalistic trade in this country, and leave the news business to the unregulated and often unprofessional blogosphere.

I cannot believe some of the things written online without any factual foundations. My personal interest is in Tottenham Hotspur, and time and again I find allegations made against manager Harry Redknapp that would lead to instant court action if printed in a newspaper.

What all those out in the blogosphere do not realise is that the ravenous personal injury lawyers are turning their attention to the internet and you will soon see a rush of libel cases brought through the offices of Messrs Sue, Grabbit & Runne by celebrities.  The bloggers will soon discover that they are not above the laws restraining and constraining newspaper reporters.

Lord Leveson must bring the fast-mushrooming world of the internet into his judgment when considering how to regulate the written word.

My argument would be for self-regulation, with harsh punishment for anybody breaking the code. I am just finishing my 91st book (a biography of my old mate Henry Cooper, as you ask) and every time I write I am being my own monitor and making sure I abide by what are very strong libel laws.

Everybody – including the bloggers – should have the same restrictions and disciplines.

Now how do I get Lord Leveson to take this all on board?

Oh yes, of course, I’ll email a link to this blog to Rachel Clark. I think she will be the next one holding an inquiry – as to why she agreed to take the job.

Perhaps SuperMac MacKenzie can give her a hand. After all, that drivel he writes in the Mail can only take five minutes to knock out.

Gissa smile, Kelv. A regulated one, of course. The only way is ethics.