A shocking thing happened to me on the way out here to the back of beyond (an old farmhouse somewhere near Toulouse), a nerve-shattering experience from which I may never recover. Avert your eyes if you are of a certain vintage and sensitive to the cruelties that life can hurl at you once you have survived middle age. 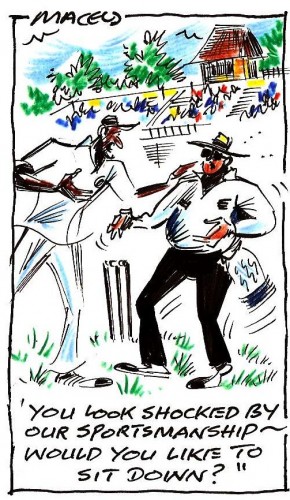 I was standing on a crowded Northern Line Tube train on the way to St Pancras to catch a Eurostar express when I made eye contact with a pretty young girl sitting about 10 feet from me. There was the hint of a smile, and I basked in the knowledge that I have retained the animal magnetism that has provoked plenty of adventures during a life as a globetrotting sportswriter.

Today’s generation, I find, are bold to the point of being brazen and suddenly I was getting evidence of it as she not only smiled but stood and advanced towards me.

Just as I was wondering if I had overdone it with the Calvin Klein after-shave, she brought my world tumbling down by uttering the six words that ripped through me like a Stuart Broad bouncer: “Would you like to sit down?”

I have spent years of rush hour bus and Tube travel offering my seat to ladies, the elderly and infirm.  Here, for the first time in my life, I was on the receiving end of the generosity. Suddenly I felt like a crumbling ruin in need of a preservation order.

My partner Jackie Jones exploded with laughter, and everybody in earshot thought it was funny rather than sad as I weakly responded: “Blimey, do I look that old.”

I declined her kind offer, and dwelt on the fact that this was the second time in a couple of days I had witnessed that there are some good old-fashioned things still left in our increasingly selfish world: the good manners that this sweet girl showed and the sportsmanship of the Indian cricketers in the Ian Bell Walkout Incident at Trent Bridge.

By the letter of the law Bell, in a moment of casualness and carelessness, was out. O-U-T, out, as he walked off for Tea, taking it for granted that Morgan’s shot had crossed the boundary rope.

But by the spirit of the game – being diluted as cricket adjusts for the fast-food generation – he deserved to be reinstated; otherwise it would have gone down in the scorebook as “walked out” rather than run out. I was disappointed but not surprised when grizzled old pros like Ian Botham, Nasser Hussein, David Lloyd and Mike Atherton all agreed that they considered Bell guilty of doziness and should have paid with his wicket.

Shane Warne could not bring himself to imagine the likes of Ricky Ponting and Allan Border taking the route of MS Dhoni and his team-mates of inviting Bell to continue his cruelly curtailed innings. Because they are too close to the sport they have served so well, none of them were able to see the bigger picture.

Around the world there were Dads turning to sons and saying for the first time: “That is a thing called sportsmanship.”

It is a word that has all but disappeared from the sporting vocabulary, and suddenly young boys and girls learning the game were discovering that there is room for showing compassion to an opponent. It does not always have to be cut-throat competitive or win at all cost.

Can you imagine the sour mood of this Indian tour if they had allowed the decision to stand? Just watch at the end of the year how many “sportsmanship” awards Dhoni will collect for his act of clemency. The quality of mercy is alive and well and living in the cricket world. India may have lost the Test match, possibly the series and the world No1 ranking along with it, but they have enhanced their dignity and that of the game.

Old hack hacked off at being hacked

I am having plenty of time to reflect on Dhoni’s donation to sporting conduct here in South West France, 40 miles north of Toulouse – cut off from the world on an ancient, remote farm owned by Jackie’s nephew Paul. He is trying to bring it dragging and screaming into the 21st century in between flying jumbo jets around the world in his day job as a pilot.

Jana, Paul’s Siberian-born partner, helped underline my creeping old age by insisting that when we sat on the porch I occupied the rocking chair. My protests that I am an old jazzer rather than an old rocker were ignored.

There is no television or broadband, and I have had to travel 30 miles to find a web café to get this column online. Twitter down on this farm is something only done by the birds, in a David Ginola accent naturellement.

For a news junkie like me, I am gradually getting over the withdrawal symptoms and am appreciating that it is peaceful, pleasant and relaxing. The downside is that I have lots of time to ponder on those six little words: “Would you like to sit down …?”

Does this mean I have reached dinosaur status and that it’s time to hang up my quill? Discuss.

Meantime I am putting the finishing touches to my 90th book, a history of Tottenham managers, with a unique second-half devoted to Spurs fans naming their dream team from players they have seen in the Lilywhite shirt.

The book has been delayed, because in that horrible competitive world from which I have briefly escaped somebody hacked into my website where I was collecting the teams and wiped it out. Charming. I have set up an emergency website at www.normangillerbooks.com for anybody who wishes to submit a team, 11 players plus five subs.

The shock of losing my website was so bad, I had to sit down.