NORMAN GILLER, a veteran boxing publicist of the halcyon days of Bugner and Dunn… oh, and Muhammad Ali, looks ahead to David Haye’s next heavyweight world title fight more in hype than expectation

In a previous life I earned my daily bread as a boxing publicist until my conscience got the better of me, because I knew I was peddling lies, damned lies and statistics. I put more quotes into the mouths of boxers than Amir Khan has had hot curries.

So I have watched with interest the diatribe of ticket-selling hype emanating from Wladimir Klitschko and David Haye as they approach their world heavyweight title showdown in Hamburg on July 2.

I worked as a word donor for the likes of Frank Bruno, Richard Dunn and Joe Bugner, so you can imagine my envy when I saw Klitschko announcing: “I have been promoting this fight in four languages and David Haye gets to dream in one.” I could never have got Frank Bruno to say something like that. Know what I mean?

But no matter in which tongue Wladimir says it, everything he and Haye are spouting still adds up to bullshit.

It is action not words that decides fights, and we will not know whether David Haye is the real deal until he climbs into the ring in Hamburg against the 6ft 7in Ukrainian. In my opinion, Haye is fortunate to be fighting the Ed Milliband half of the Klitschko brothers. Vitali is, without question, the harder mountain to climb.

They are calling it a £50 million showdown, but I just don’t see how the fight is going to generate half that amount. The only way you can make that sort of income is by having mass appeal in the United States, but my pals on the other side of the pond tell me there is close-to-zero interest.

I have to own up to being an expert on world heavyweight title fights losing money in Germany, and it is with a mixture of embarrassment and amusement that I revisit a memorable episode in my career banging the boxing publicity drum.

In April 1976, Richard Dunn fought German champion Bernd August for the European title vacated by Joe Bugner, with the added prize that the winner would meet Muhammad Ali for the world crown. The Ali fight had already been confirmed for Munich, with the undefeated August expected to be the opponent. There was no way, so the Germans thought, that he could lose to Dunn, whose career had largely followed the Baron de Coubertin principle of the importance of taking part rather than winning.

Dunn threw a spanner – no, a hammer – in the works with a swinging right hand that separated the shambling alp August from his senses, the referee having to rescue him as he stumbled around the ring in the third round like a puppet that had its strings cut. Poor old August was one of life’s losers – just a few years later he was killed in Australia when his motorbike collided with a kangaroo.

It was the $6 million punch from Dunn. That is how much it cost the German promoters when they stubbornly went ahead and put on Ali’s title defence in a midnight fight in Munich.

I try to hide it on my CV that I worked on this fight as a publicist, as it was the biggest money loser of any championship contest staged in Europe. The Germans were just not interested in watching a virtually unknown Brit, even though the legend that was Ali provided the opposition.

The stadium would have been less than half full if Ali had not gone to American military bases giving away tickets by the fistful.

My brief from my fee-payers ViewSport – masterminded by entrepreneur Jarvis Astaire – was to drum up business for the cinemas screening the fight in Britain (note on CV: ViewSport made a profit).

Ali flew into Munich with an entourage of 54 ­– family, friends, sparring partners, souvenir-sellers, hangers-on, all of them running up the sort of promotion-paid expenses that make our MPs seem like amateurs.

Now enter the story one of the more astonishing characters to cross my path, a hypnotist called Romark. He had been on the sports pages the previous year when Crystal Palace manager Malcom Allison invited him to put the players under his spell.

It all ended acrimoniously, with Romark claiming Allison had not paid him the promised fee for his hypnotic deeds and he put a curse on Palace. Some believe the Curse of Romark is still working at Selhurst Park to this day.

This was the same Romark who once boasted that he could drive through London blind-folded. He actually managed 30 yards before crashing into the back of a parked vehicle that just happened to be a police car.

The Daily Mirror had led the way on the Romark-Palace saga, and I suggested to their boxing correspondent Ron Wills that it would be a good idea for them to pay for Romark to come to Munich to hypnotise Richard Dunn. What nobody had told me was that earlier in the year Romark suffered a stroke that had left his face contorted, with one eye lower than the other. Not a pretty sight.

He had been brought over to Munich for the express purpose of trying to convince Dunn he could cause the biggest upset in boxing history, but Romark had more grandiose ideas. Without a word to anybody, he decided he could put Ali under his influence.

As we walked through a corridor of the Hilton on the day of the weigh-in, Romark and I just happened to find Ali walking towards us with trainer Angelo Dundee. As I started to exchange pleasantries, Romark suddenly confronted him and – seven inches shorter than the champ – said with as wide a stare as he could muster: “You are doomed to defeat tonight. D-o-o-m-e-d.” 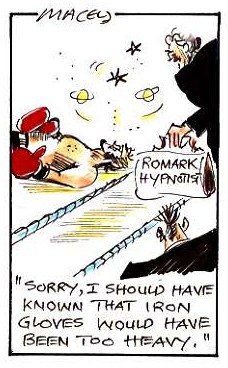 Ali fell to his knees laughing uncontrollably, while Dundee asked: “Who is this nutter?”

“He’s our secret weapon,” I said, trying hard to keep a straight face – something beyond the powers of the stricken Romark.

Ali and Dundee continued to the weigh-in, where his huge entourage joined him. So many people climbed on to the stage that it collapsed under their combined weight, luckily without any serious injury. Romark meaningfully touched the side of his nose to suggest that he had something to do with it.

Later that afternoon, he tucked Richard Dunn up in bed and told him the story of Cinderella as he sent the challenger to sleep (“I pretended I had drifted off,” Richard confided later. “The bloke was completely barmy. He kept telling me I had fists of iron.”)

When the Dunn team got to the stadium, they were annoyed to find an American TV crew in their dressing-room. Manager George Biddles ordered them out, and while the cameraman continued to focus on Richard, his trainer and father-in-law Jimmy Devanney turned off the dressing-room lights.

This backfired because Richard was now sitting in the darkened dressing-room while high on a wall facing him a TV monitor was showing live pictures of Muhammad Ali telling the viewers just what he intended to do to his challenger.

Dunn put up a brave, beyond-the-call-of-duty performance before being stopped in five rounds by Ali. I climbed into the ring at the end of the fight to collect his gloves as Angelo Dundee pulled them off. They were to be signed for charity.

I took them to Ali’s bedroom in the Hilton, and sat on his bed – his lady of the time between the covers – as the champion autographed the gloves and a book for me. Inside the right glove, written before the fight: Ali wko5.

It was 3 o’clock in the morning when I went down to the foyer just as Richard Dunn arrived after a medical check up. He was met by a posse of hard-bitten British pressmen, who melted and gave him a round of thunderous applause.

Romark, with tears streaming down his contorted face, pushed his way through the crowd of reporters and cuddled an embarrassed Dunn. “I let you down, Richard,” he sobbed. “I made your fists turn into iron ­– but I forgot about your chin.”

There was no happy ending for Romark, real name Ronald Markham. He later had another stroke and died after being imprisoned for embezzling his mother.

I wonder if he could have hypnotised Haye into landing his haymaker on Klitschko’s chin? I would have dismissed it as hype.