WITH MY biography of Henry Cooper about to be published, it’s fitting that a “real deal” heavyweight hope has arrived in the formidable shape and enormous size of David Price. If Damon Runyon was still around, I think he might have dubbed him something like the Liverpudlian Leviathan.

Before he died a year ago this month, Henry had become totally disillusioned with the boxing scene, to the point where he gave up his role as BBC radio inter-round summariser.

“I was fed up watching boxers taking longer to get into the ring with those over-the-top entrances than it took to fight,” he told me, “and I was unhappy telling porkies about boxers who would not have lived with the fighters around in my day.”

I know that Henry would have been impressed by Price, arguably the most accomplished British-born heavyweight since Lennox Lewis retired. His four-round flattening of brave but outgunned Sam Sexton at Aintree racecourse at the weekend brought him the British and Commonwealth titles in only his 13th professional fight.

He has learned well from his sparring sessions with the Klitschko brothers … and, I hope, learned well enough to know he must not be tempted into the ring for real with either of them for at least 18 months.

His promoter Frank Maloney was in at the groundfloor of the Lennox Lewis career, and knows better than most about pacing a fighter to world championship contention.

Lennox was born in the same Stratford hospital as my two children in the 1960s, just a discus throw from where the Olympics are being staged this year. He won Olympic gold in a Canadian vest before returning to England to take a measured (and treasured) path to the world title.

Price was an Olympic bronze medallist in Beijing, and Maloney has been tracing the same careful steps up the ladder as with Lennox.

I put the words into Frank Bruno’s mouth for much of his career as his spin-doctor. It led to my one sharp exchange in a 53-year friendship with Henry Cooper, after I’d fed Frank a line about the old heavyweights not being able to live with the modern champions because they were little more than cruiserweights.

Henry pulled me up on it and told me: “You’re putting words into the mouth of a dummy.”

I wonder what Henry would think of the Price physique. He stands 6ft 8in tall and weighs 17st 7lb. The heaviest 6ft 2in Henry ever weighed was 13st 11lb, and he gave away weight in all but eight of his 55 professional fights.

For his famous 1963 fight with the then Cassius Clay – and that knockdown – Henry weighed less than 13 stone. So as not to give Clay a psychological advantage, his crafty manager Jim Wicks gave him racing handicap weights to slip into his boots and a 4lb weight to hold so that he weighed in at 13st 4lb.

By comparison, Price is huge and is extremely fleet of foot for such a big man. I can almost hear Henry saying: “He’s a good strong boy.”

There is a huge domestic pay day if they can ever get Price and Tyson Fury into the ring they once shared as amateurs. Meantime, I hope they use Gentleman Henry Cooper as a role model in the way they represent their sport, which has been badly scarred by the outrageous behaviour of David Haye and, in particular, Dereck Chisola.

HOW PATHETIC AND SAD is it when a grown man – sitting alone on his sofa watching the Olympic Torch Relay – swears loudly at the television screen? 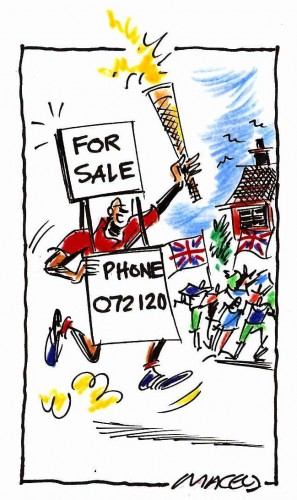 That pitiful soul just happened to be me when I caught sight of American pop star Will.i.am running a leg of the relay. He was clowning, showboating and Tweeting, in my view demeaning the tradition of the event.

One of his first Tweets was, “I’d like to thank coca-cola for this once-in-a-lifetime opportunity”. Was that Baron de Coubertin I heard spinning in his grave?

This set “Norman Meldrew” on the warpath, and I admit my feelings are in part fueled by the fact that an application for me to be considered as a relay leg runner was turned down. I have always been an Olympic fanatic. How many people do you know can name the first four finishers in the 1952 1,500 metres final?

Just as a matter of trivial interest, Roger Bannister was the fourth home – two years ahead of becoming the first man to break four minutes for the  mile. Not a lot of people want to know that.

But I digress … what really aggravated me as I watched Will.i.am carrying the torch after thanking his drink sponsors is that I nominated the queen of women sportswriters, Julie Welch, to run a leg but she – along with several very worthy SJA colleagues who have devoted their entire careers to reporting on the Olympic movement, including the daughter of the late, great John Rodda – were all ignored.

Julie Welch would have captured the experience beautifully for posterity and with a little more depth than Will.i.am’s tweets: “Crazy energy in the UK” … “Its nuts here in taurton [sic] …so much excitement… #runningthetorch.”

The tawdry auctioning of torches on eBay has further added to this old git’s agitation, something instigated the moment that the Games organisers decided to squeeze a little more profit from the Olympic ideals by charging torchbearers 200 quid for the right to keep their torch as a memento. The Olympics should always stand for the three “Ds”: dignity, dignity, dignity.

It is all-important they get absolutely right the choice of the 8,000th and last runner, the one with the honour of lighting the actual Olympic flame. This is the best-kept secret of the Games, and it is possibly even money between Sir Steven Redgrave and Dame Kelly Holmes.

But, given the appearance of Will.i.am, it might be worth putting some “outsider” money on Cliff Richard.

I CAN’T sign off this week’s column without congratulating Chelsea on their remarkable Champions League triumph. It’s amazing what you can get for a billion pounds these days.

Regardless of the economics, you have to admire the character of a Chelsea team outgunned in both the semi-final and final yet still managing to find the defensive willpower to come out on top. I just hope their ‘park the bus’ tactics do not spawn copycats, otherwise we will return to the choking catenaccio system of the paralysed 1960s and 70s.

All this has been typed through a tide of Tottenham tears, as the realisation of relegation to Channel 5 sinks in.

I was particularly pleased for Frank Lampard, whose Dad is a mate from way back. But what a thing to do to his Uncle Harry!

It has all brought a barrage of abuse on line for Harry Redknapp, as if it’s his fault that fourth place in the Premier League is no longer a guarantee of Champions League football.

Perhaps I can get Will.i.am to compose a hip-hop rap called The Chelsea Blues?