As David Haye and Ordinary Harrison prepare for their absurdly billed world heavyweight title fight on Saturday night, I will recall what the late Eamonn (“This is Your Loife”) Andrews once told me.

“I hate the hype and hoopla of heavyweight boxing,” he said. “But I just can’t cast my eyes away. I have to watch it, even when I know at least one of the fighters is a bum.” 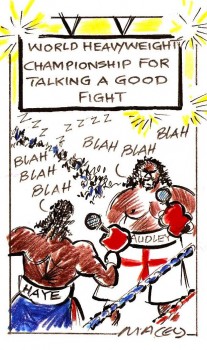 Eamonn, a good friend with whom I worked as a scriptwriter on his This Is Your Life show, did me a favour by appearing as the advocate for Rocky Marciano to be considered as greater than Muhammad Ali.

It was for a 1980s ITV series I had created, called Who’s the Greatest?

Representing Ali was actor Dennis Waterman, whose older brother Peter was an exceptional welterweight in the 1950s.

A jury of 12 listened to the arguments and the testimony of witnesses Henry Cooper and Brian London (for Ali) and Reg Gutteridge and ex-British heavyweight champion Johnny Williams for Marciano. The master of the mic, the late Brian Moore, was The Judge.

Despite an impassioned delivery by Eamonn – a former All-Ireland amateur middleweight champion, who was making one of his final TV appearances – Ali won the jury vote 9-3.

Later, in the hospitality room, all of us connected with the show including Eamonn agreed that Ali was The Greatest.

One thing’s for sure, neither Haye nor Harrison can be mentioned in the same building as Ali or Marciano. I will only believe that Haye is the real deal if he puts action where his mouth is and takes on and beats one of the Klitschko brothers. I will not hold my breath.

Fighting past-their-best challengers like John Ruiz and Harrison will do nothing to cement Haye’s desire to be considered one of the greatest of modern heavyweights.

He and Harrison have both talked good fights on their way to their Manchester showdown, when I expect the 2000 Olympic champion to be shown up as being “shot”, with a chin that will not be able to take Haye’s haymaker.

I am leaving myself wide open to accusations of gross hypocrisy with my attack on the hype surrounding the fight.

In a previous life I was the publicist who coached Frank Bruno to say those corny lines (“know wot I mean, ‘Arry”) … I persuaded Muhammad Ali to claim he was more frightened of Richard Dunn’s wife, Janet, than his challenger from Bradford … and I got Joe Bugner to pose nude, with just a boxing glove to spare his blushes.

It was all about putting bums on seats, so I know why Haye and Harrison have been making outrageous statements carefully prepared to get the best possible projection.

What a pity they are selling such defective goods. You wouldn’t get me falling for the hype. Note to self: Don’t forget to book the live Sky coverage of the fight. As Eamonn Andrews said all those years ago: “I just have to watch it.”

MY REGULAR READER WILL know that I am something of a fixture on Facebook, a wonderful communicating tool that is sadly being hijacked by people who use gutter language.

I have become a Victor Meldrew-type figure of fun, constantly moaning about the unnecessary swearing online. Now I have switched my old-git attack on the fickleness of football fans.

Four days later, Spurs could only draw with vastly improved Sunderland, and a minority of their fans booed the team off the pitch.

After my many years as a neutral football reporter I have finally come out of the closet as a Tottenham supporter, mainly because they are always easy on the eye and are managed by my old mate Harry Redknapp.

Aitch is a fellow East Ender who believes football should be played with style and panache. Without question, he has made Spurs the most entertaining team in the Premier League, but their rollercoasting performances mean you can never be totally confident about their results.

The majority of Tottenham fans accept that this comes with the territory, but there is an element who seem to think that anything less than victory is failure.

They should go along with Rudyard Kipling and try to treat those two imposters – triumph and disaster – just the same.

But I suppose you have to get my old-git status before you can take such a balanced view of things.

What I do know is that booing your team is the lowest-form of support. Wonder if Harry would employ me as his publicist?