NORMAN GILLER considers how he will be voting in the SJA’s British Sports Awards, and although Gareth Bale isn’t yet in the reckoning, he swears the Spurs wizard could be soon

This old git has made a right fool of himself this week by standing like Cnut (that’s not a typo, before you write in, but the old English spelling) , against the rising tide of swearing on the Facebook football forums.

I made my stand in the Glory Glory Tottenham Hotspur forum, which boasts the little matter of 26,500 members. The “C” word, mixed and shaken with lots of “F”s, was being tossed around like contaminated confetti. 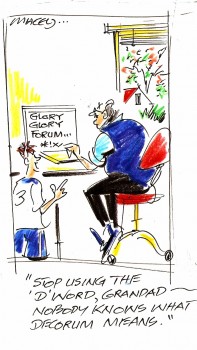 This was in the wake of referee Mark Clattenburg’s clanger in allowing Nani’s farce of a goal for Manchester United against Spurs at Old Trafford. OK, it was enough to make a Saint swear (or even a Greavsie).

But, perhaps piously and positively pompously, I decided to take exception to the swearing appearing on a screen near me and suggested that the perpetrators mind their language.

I made a censorship stand after James, my eight-year-old grandson, stared over my shoulder and asked what the “C” word meant. I told him it was Cockney rhyming slang for Berkshire hunt.

Of course, all that my complaining achieved was to attract more swearing and this time, I was told to eff off in no uncertain terms.

I stood my ground and pointed out that a former near-neighbour of mine, Timothy Berners-Lee, invented the world wide web as a free form of communication and didn’t deserve to have his creation dragged into the gutter.

“Tosser” was one of the kinder words aimed at me, and I was dragged kicking and screaming from the forum by my son, Michael, who told me: “Dad, you’re making a complete tit of yourself. Swearing is part and parcel of the modern world and is cemented into the language at all football grounds …”

So my Cnut drowned without trace. I am reminded of the old Private Eye cartoon, with the water lapping at the king’s feet, and one bystander says to another: “Silly Cnut”.

I am from the generation where we were taught to be respectful of others and certainly never swear in the hearing of ladies (the Glory Glory forum has hundreds of “Yiddette” members).

But I have to hold my hands up and admit I am out of step with the modern world when it comes to swearing and old-fashioned good manners.

I wonder why it is that every generation thinks they invented swearing? It’s been going on since Anglo-Saxon times. It was round about 50 years ago that I was at a match at Leyton Orient for the Daily Herald when that great Cockney character Tosh Chamberlain was sent off for swearing at the referee while playing for Fulham.

Tosh fumed during a car park interview after the match: “The ref said he was sending me off for calling him a c***. I said I wasn’t saying it to him. I was talking to Johnny Haynes and I can call him a c*** ‘cos he’s on my side …”

Having “sworn” never to visit the Glory Glory forum again, I was back within 48 hours joining in the anthems of acclaim for Tottenham’s victory over Inter Milan in general and Gareth Bale’s storming performance in particular.

I go back to the suffocating days of the catenaccio defensive system popularised by Argentine coach Helenio Herrera when in charge at Inter in the 1960s. In all those years since I have never seen an Italian defence so dismantled and disorganised as Inter’s against the lightning-fast running of Bale. Maicon – “the world’s greatest right-back” ­­– returned to Milan with a new English phrase ringing in his ears: “Taxi for Maicon …” He didn’t need a taxi. He needed jet-skis to catch the Welsh Whirlwind.

I have watched Bale’s progress from his early days with my almost-local club Southampton, and knew he was destined for an eventful career beyond the bells of St Mary’s. I also witnessed the early performances of then little-known players like Bobby Charlton, Denis Law, George Best, Jimmy Greaves, Peter Osgood and Glenn Hoddle. It is only a matter of time before Gareth Bale can be mentioned in the same breath as these legends of the game.

He has made such an impression on me that I am going to chart his progress in self-published book form, kicking off with one that will be published just in time for Christmas. I have a lot of Facebook friends who have offered contributions in the tribute section. And they have all promised not to swear.

MUST DASH – I have my votes to cast for the 62nd annual SJA British Sports Awards.

Between you and me, I am torn between Tony McCoy and Graeme Swann for the sportsman’s award, and I have Beth Tweddle pencilled in for my women’s vote just ahead of Jessica Ennis and Rebecca Adlington.

If the women’s award was for nerve I would have no hesitation in selecting Olympic skeleton bob champion Amy Williams, for having the courage to hurtle head first down a wildly sloping icy corridor at speeds of around 90mph on what looks like a tea tray.

But I have to ask myself how many women actually participate in this sport? I think you could count them on the fingers of Venus de Milo.

Beth, Jessica and Rebecca compete in sports where there is huge rivalry, and I come down for Beth because of her incredible feat of winning two gold medals in an hour at the European gymnastics championships.

The awards will be presented at a glittering luncheon at The Brewery in the City of London on Wednesday December 8. But there are veterans among us who will remember the SJA Awards as an annual dinner and dance when we were able to show off our ladies, DJs and Strictly Come Dancing footwork.

I make no excuse for again recalling a memory of the 1976 dinner, when my personal guest list included Eric Morecambe, Joe Bugner, Terry Lawless, Frank McLintock and their wives. That was back in the days when I was earning well with my scribblings before the Fleet Street drawbridge was pulled up on freelancers.

The winner that year was graceful world and Olympic champion ice skater John Curry, who had recently been outed as gay by the German tabloid Bild-Zeitung. What a shock that was!

The comedy for the evening was provided by ventriloquist Roger de Courcey and his blue bear Nookie. While he was doing his act, John Curry nipped away for a comfort break. De Courcey spotted Curry returning to his top table seat and ad-libbed through the mouth of Nookie: “… it’s good to feel the Christmas spirit among us all, and here comes the fairy for the tree”.

There was a little embarrassed laughter, a lot of mutterings, some booing and jeering and, to my right, Eric Morecambe stepped out of character by shouting: “Disgraceful.”

Goodness, next there will be swearing at the SJA ceremony.

Who is worthy of your 2010 vote? Check out our experts’ views here:

Voting forms are being posted to members with the SJA Bulletin autumn edition, or you may vote online.

Deadline for voting is November 9.

Tickets to attend the SJA British Sports Awards on December 8 are also now on sale.