University lecturers in journalism, media studies and sports journalism are among the most concerned by the impact that the Government’s plans to cut higher education funding may have. 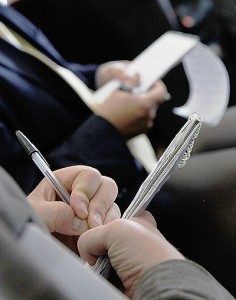 This week, it was announced that course fees of up to £9,000 per year could be charged to students doing degree courses from October 2012.

It was the hot topic of discussion when university heads from 12 National Council for the Training of Journalists-accredited degree courses met in London this week.

It seems inevitable that students will be forced in to taking on larger debts, while competition between courses is also likely to increase.

As far as sports journalism courses are concerned, Rob Steen, senior lecturer at the University of Brighton, fears that degree courses such as his will become even more the domain of a privileged few.

“Any prospect of life becoming tougher for students, of any hue, is bad news for the have-nots and the have-not-muches. The impact on sports journalism students does not promise to be in any way beneficial,” Steen told sportsjournalists.co.uk.

“Journalism is a profession that once prided itself on its pursuit of equal opportunities for all, so long, in the case of sports hackery, as you were white and possessed an Adam’s apple.

“Sports journalism courses are already dominated by middle-class students (approximately 90 per cent of whom possess an Adam’s apple). The higher the fees, the more likely the less well-off are to be squeezed out,” Steen said.

“Throw in the expenses involved in taking NCTJ exams – some of which my college has traditionally met, though others have been less generous – and it seems clear to me that there is a clear danger of the situation deteriorating rapidly.”

Steen is particularly concerned at the growing trend of using – or mis-using – unpaid interns, or trainees, to cover a full range of a sportsdesk’s activities, often to compensate for the absence of proper staffing.

“In just about every case I have come across, these interns can afford to work for nowt only because their parents have the wherewithal to support them,” Steen said.