Was it the British media wot lost it? NORMAN GILLER admires and applauds the FIFA investigations by Panorama and the Sunday Times, and wishes newspaper editors allowed more of their reporters to get their teeth in to “big” stories

Andrew Jennings has for many moons been one of the finest and most fearless investigative journalists in the world. I bow the knee to him as The Master of his chosen minefield.

But for a man who thrives and survives on the accuracy of his reporting, I was surprised that he could make an elementary error. Anybody who has been through the Fleet Street school of hard knocks – want to see my scars? – knows you should never make sweeping statements that drag everybody and everything into your fishing net.

Jennings’ dismissive description of Britain’s sports news reporters in the Press Gazette as “the worst in the world” was a slur on the many who do their job conscientiously and with a dedication that meets the high Jennings’ standards.

Jennings, the driving force behind Panorama‘s portrayal of FIFA corruption, aimed his bullets at the wrong target. I would have led the cheerleaders had he said: “Our editors are so obsessed with the culture of celebrity. They forget to give their writers the time and guidance to do proper reporting.”

I know there are very capable journalists out there who would like nothing better than to get their teeth into the private parts of corrupt officials – and some sportsmen – who duck, dive and bring sport into disrepute. 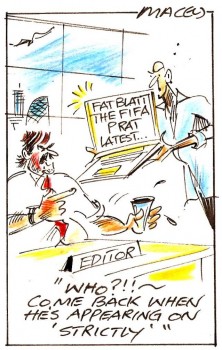 But newspaper staffs have shrunk so much that those reporters that are left just do not have the time away from their everyday headline-and-deadline duties to carry out the sort of meticulous research more common among broadcasters, and essential to come up with watertight, Jennings-style exposés.

Jennings is from my old git generation. If he was starting out in the newspaper world today, I fear he would never get the chance to learn the demanding craft of investigative reporting.

Jennings also has to accept that he is one of a kind. You need to be a thick-skinned lone wolf, have an inquisitive mind and a hell of a stubborn streak to break down the sort of barriers (and barristers) that most of us – and most of our editors and risk-shy legal departments – would see as insurmountable obstacles.

I will hold my hand up and admit that, in my reporting days, I turned a blind eye to many incidents and infidelities that would have earned me fleeting fame if I had exposed them. But the instant headlines would have made it impossible for me to do my day job in the small village that is the world of football.

I admire Patrick Collins, one of the finest sportswriters of any generation, for admitting in his Mail on Sunday column that he had been among a quartet of journalists privy to an off-the-record revelation from England’s World Cup bid chief executive Andy Anson that 13 of the 24 FIFA voting members were “buyable”.

Collins and his journalist colleagues attending that dinner that night last January knew that to break the confidence would have – in his words – “left the England bid to stage the 2018 World Cup finals dead in the water”.

I wonder if this information from the loose-lipped Anson provided one of the foundation stones for the Sunday Times investigation, published in October, when two of those FIFA executive committee members were fingered as being open to a bung?

Collins’s views echoed around the world from the Mail Online website, while the brilliant Sunday Times exposé was, and remains, hidden behind the Wapping paywall, visible only to those who bought the newspaper and to a small paying internet audience. It left the field open for every Tom, Dick and Harriet to re-tell the story online, with hardly a mention of the extensive ST input.

It was Andy Anson who said after England’s humiliating first-round poll defeat in the World Cup bidding process: “We have spoken to some executive committee members and they are saying to us that our media killed us.”

A classic case of shooting the messenger. Looking in from the outside, I reckoned it was the biggest stitch up since the Bayeux Tapestry.

As I said here from my SJA pulpit two weeks ago, I am glad I live in a country where the truth is told and not suppressed. As one observer mentioned in the FIFA voting aftermath, had a journalist in Russia tried to report as the Sunday Times or Panorama had done, the chances are that they would have ended up in jail. Or worse. Much worse.

A couple of newspaper sports journalists fired back at Jennings on Radio 4’s Media Show. Ashling O’Connor, Olympics correspondent for The Times, and Mihir Bose, both claimed that British sports news reporting is close to the best rather than the worst in the world.

O’Connor came from behind the Wapping paywall to say:  “I think he’s levelled these charges at the wrong people. In terms of the stories that the British press have broken, the allegations of Portugal and Spain colluding with Qatar – which is now being investigated by FIFA – were first reported in a British newspaper.

“If you go to a FIFA press conference, the hardest questions are being asked by British journalists. Andrew wouldn’t know that as he’s been banned.” Jennings has been on FIFA’s case for a very long time, after all.

O’Connor was into her stride. “He does a different job to what I do and what my colleagues do. I’d love to spend months if not years on one story.”

Just as the SJA President Sir Michael Parkinson said last week in calling for an eight-year investigative campaign, “lifting the rock on FIFA and seeing what crawls beneath”, I just hope a host of reporters go down the Jennings road and dig into the facts behind Qatar astonishingly winning the right to host the 2022 World Cup finals.

I have media pals in Australia who are steaming over the way the Aussie bid got knocked out of contention as if hit by a wrecking ball bowled by Jimmy Anderson. FIFA are going to be under scrutiny from Down Under as well as Up Here. Septic Bladder could find himself caught in the middle.

My regular reader will be delighted/disinterested to know that I have just finished my 88th book. It is called The Glory and the Greed, a novel focusing on corruption in international football, where bungs flow thicker than oil in Qatar.

Can I bribe any publisher to put it on their lists?

I am not brave like Andrew Jennings. I have changed all the names to protect the innocent and to avoid legal fisticuffs with the guilty.

Even when I’m making it up, I am frightened to go down the startlingly exposed  Jennings road. Don’t think I would have won Andrew’s approval as an investigative reporter.