NORMAN GILLER  thinks there will be little sympathy at the Emirates for the demise of Piers Morgan’s American TV career, and recalls The Greatest, 50 years on from his first winning the world heavyweight title

If I were back on my old football reporting beat, there is no way I’d be able to resist asking Arsene Wenger what he thinks of the CNN axing of Piers Morgan. 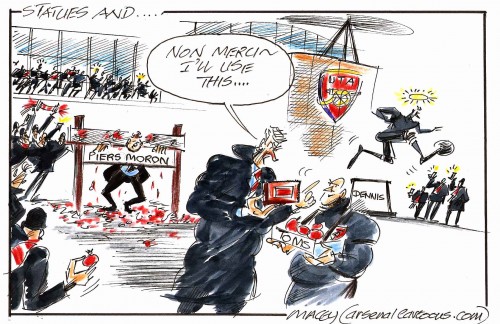 The irony of Morgan’s sacking is that it comes just a few months after he was leading the lynch mob trying to hang the Arsenal manager from an Emirates crossbar.

He was making vicious attacks on the French professor of football, who maintained a dignified silence and got on with steering Arsenal to a challenging position for the Premier League title.

Wearing my Spurs hat, I had an online spat with Piers and suggested that a man of his illustrious standing – with chat shows on both sides of the Atlantic – should keep a low profile on Twitter rather than push his jaundiced football views.

My 140-character proposal was that he should follow the example of his distinguished CNN predecessor Larry King, and act in a dignified way rather than make a fool of himself with his rants about Wenger. Back came unabashed Morgan with the comment that what he says about football is nothing compared to what King Tweets about baseball.

Morgan continually revealed his ignorance of the Beautiful Game by his savage assaults on Wenger. Typical: “It feels like putting the family dog down. But sometimes you must be cruel to be kind.”

Now it is Morgan who has been put down, and it’s hard to find any sympathetic voices raised in his defence. I admired the way he stood up to the American gun loonies, but it misfired because many CNN viewers took offence at a Limey telling them how to conduct themselves. His viewing audience quickly shrunk from more than 2 million to fewer than 300,000.

The fact is Morgan has blown a chance in a million to be a respected Brit voice in the States, following such broadcasting masters as Alistair Cooke, David Frost and Christopher Hitchens.

It is rumoured that his ITV chat show – Piers Morgan’s Life Stories – could be next for the axe. That would please some of my old colleagues on the late This Is Your Life show, who insist his programme was a rip-off without the surprise element.

If I were advising Piers, I would be telling him to ease off on the arrogance and to concentrate on winning friends and influencing people.

“Professor” Wenger could show him how.

IT WAS 50 YEARS AGO this week that Muhammad Ali became world heavyweight champion, back in the days when he was about to abandon his “slave” name of Cassius Clay.

I was reminded of it when Spanish-based multi-media producer Vernon Grant filmed me for an online diary that he has set up in my name.

Vernon is a talented character, who worked for Sky Sports before boldly going where few had gone before as a freelance armed with a camera, a good knowledge of online technology and a determination to make an impact. He also has a sound knowledge of all sports, and our mutual love of boxing history drew us together.

The easiest (and best) gig I ever had was as Muhammad Ali’s PR on some of his European fights. He needed a PR like Einstein required a calculator.

We got on famously, and it broke my heart to see him taking on at least five fights too many. He should never have fought again after the “Thriller in Manila” when he and Joe Frazier took each other to death’s door.

But when I met him on his last visit to Britain – a shuffling shadow of the great athlete he had been in his peak years – he whispered to me: “I don’t want no pity. I’ve had a great life and I’ve now found my peace with Allah.”

Ali was without argument The Greatest, both as a heavyweight champion and as a human being. He gave away most of the fortune he earned in the ring, and despite all the shouting and tub-thumping, he was at heart a humble man.