The SJA’s veteran columnist, NORMAN GILLER, has never yet missed a deadline, but this week he filed from his hospital bed. We’ll let him explain why…

A funny thing happened to me on the way to this colimn … I had a heart attack.

I am tip-tapping this on my iPhone in hospital, because here in the cardiac ward there is no access to the interweb.

My ticker invasion came without warning on Monday evening while I was editing my 93rd book, a collective of 44 scribes for the Spurs Writers’ Club that I have formed.

I suddenly felt as if dear old Norman “Bites Yer Legs” Hunter was stamping on my chest, and within 30 minutes of the first assault I was being whizzed by ambulance to hospital here in dozy, delightful Dorset, where we just happen to have one of the finest cardiac units in the land (silent toast to my hero Nye Bevan and the NHS). 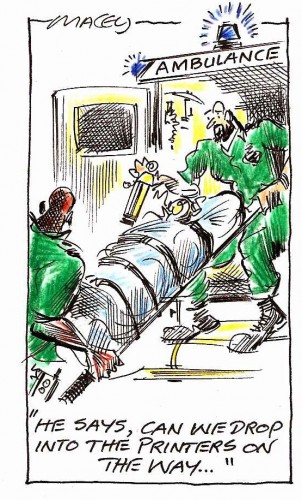 As I laboriously type this on the tiny keyboard, a nurse is tut-tutting at my bedside because I am ignoring the surgeon’s instructions to lay down my arms, or at least my typing fingers while he assesses the extent of the damage.

He describes the attack as a warning and wants me under his supervision here in hospital for at least a week, while he carries out a series of tests on this crumbling 71-year-old ruin in need of a preservation order.

Included in his first prescription is a course of beta blockers, so that’s me out of the Olympiics unless he can come up with masking agent.

I have to accept that this is a life-changing episode, despite my flippancy that stretches to confusing the wonderful nurses because my tea is not stirred anti-clockwise. And I am the idiot who demanded the hospital chef be disciplined for battering the fish. Could you put up with me 24/7?

I can no longer be the boy racer, who stupidly boasts of never being overtaken on the motorway, and the power walking I always claim to keep me fit will have to slow to a stroll.

Then there is the little matter of my writing output. The surgeon looked at me as if I was mad when I told him I was working on my 93rd book, and that I had been averaging four a year as I chase my target of a century of books before I am deleted (quantity not quality, I confess).

My first full realisation that this is something serious and not to be pushed under the carpet of comedy came with the instruction that I would be best advised not to tune into the crucial Spurs v Everton match. That’s like telling the Pope he has to miss Mass.

My mate from way back, Harry Redknapp, knows better than most that watching Tottenham can be demanding on the old jam tart.

I am suffering huge withdrawal symptoms because for the first time in months I am parted from my hundreds of friends on Facebook and Twitter (their sigh of relief is causing a breeze through the last of the Dorset leaves).

I have so many exciting projects on the go, including a Henry Cooper biography, two major collaborations with Ricky “My Arse” Tomlinson, the Spurs Writers’ Club, the greatest British film idea since Chariots of Fire, plus there’s This One’s On Me Revisited with Jimmy Greaves …

Hang on… A nurse has arrived with a sedative. You have to admit, I’ve got plenty of heart.