Cricket’s response to Steven Davies’s announcement this week has been calm and reasoned. How, wonders NORMAN GILLER, would the denizens of the Press box react if a fellow sports journalist came “out”?

Shortly before Surrey and England wicketkeeper Steven Davies announced that he is gay, the Boston Herald’s chief sportswriter, Steve Buckley, used his column to come out of the closet.

“For too many years I’ve been on the sidelines of Boston’s gay community but not in the game – figuratively and literally …. It’s my hope that from now on I’ll be more involved. I’m not really sure what I mean by being ‘involved,’ but this is a start: I’m gay.” 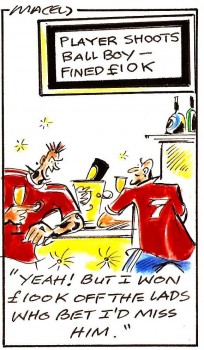 Perhaps this means coming out is the “in” thing? I got to wondering if there is any British sportswriter ready to pin his or her colours to the post, so to speak.

I shared press boxes with several Fleet Street sportswriters whom I knew or suspected of being gay, but this was back in the day when homosexuality was illegal and homophobia was rife. It must have been torture for them leading their secret lives.

From my straight (some would say boring) vantage point, I could not give a monkey’s about a person’s sexuality. I judge people on their ability, personality, willingness to laugh at my jokes and their level of tolerance.

Homophobia continues to scar the world of football, and my old mate, master publicist Max Clifford, reveals he has advised a handful of professional footballers not to come out, because their lives would be made hell by a mindless minority of knuckle-headed morons.

Hopefully the world has moved forward since Justin Fashanu became the first and so far only top-flight League player to come out, selling his “confession” to The Sun in 1990 and including lurid allegations of a gay affair with a Tory MP.

Typical of the time, it was all projected in a sleazy and sordid manner that put any campaign for tolerance back several decades, and it ended tragically when Fashanu committed suicide eight years later, haunted by unmanageable events in his sad life. He was not helped by his Nottingham Forest manager Brian Clough continually referring to him as “a poof”.

If a prominent British sportswriter were to come out, Steve Buckley style, might it help many sportsmen who are having to live a lie. Any volunteers?

Meantime, The Guardian’s Matt Scott, in his Digger column, reports that bookmakers William Hill are offering odds on when the next footballer will come out of the closet (or perhaps it would be more appropriate to say “the locker”).

The Digger has unearthed the fact that Hill’s are asking punters: this season, during the close season, next season, or beyond? Hill’s spokesman, Graham Sharpe, revealed that since Steven Davies had joined Gareth Thomas in coming out, the subject is a talking point, making it legitimate for a punt.

I am sure the advice from Max Clifford would be: “Don’t bet on it …”.

SIR ALEX FERGUSON is going to have to retire or leave this mortal coil before he gets the full credit he deserves for being the greatest British football manager of all time, with perhaps fellow Scots Sir Matt Busby, Bill Shankly and Jock Stein as challengers for the title (ok, and also Englishmen Herbert Chapman, Stan Cullis, Bill Nicholson, Brian Clough, Bob Paisley and Alf Ramsey in the frame).

But while Fergie is active and alive, let me say it is time he stopped continually shooting the messenger.

He does himself no favours with the sort of quote he delivered after Wayne Rooney’s shameful off-the-ball assault on  James McCarthy at the weekend: “There’s nothing in it…” Fergie said, adding “as it’s Wayne the Press will raise a campaign to get him hung or electrocuted, something like that.”

If that had been McCarthy using the elbow on Rooney, Fergie would have led the prosecution calling for an execution by the FA.

And here’s a question for you: If a student had shot Ashley Cole with an air rifle what would manager Carlo Ancelotti have said: “Everybody makes a mistake in life, apart from God”?

The Football Association had the opportunity to show they will not tolerate this sort of behaviour from over-paid, pampered millionaires, but they ducked their responsibility.

The Press’s fault, Sir Alex? I don’t think so.

Is he going to blame the media for his quote about Martin Atkinson that has landed him in trouble with the referees’ union?

This is what he said after Tuesday’s defeat against Chelsea at Stamford Bridge: “You hope you get a really strong referee in games like this. It was a major game for both clubs and you want a fair referee. You want a strong referee anyway and we didn’t get that. I don’t know why he’s got the game. I must say that when I saw who was refereeing it, I feared the worst.”

Fergie can’t point his accusing finger at the Press for this one.

But let me speak up for the United boss (as if he needs words being put in his mouth). Looking on from the sidelines, it was ridiculous to appoint Atkinson as the referee of such a crucial game given his past history with Manchester United in general and Sir Alex in particular.

That’s fair comment coming from me, but Fergie should have kept his mouth shut. He has given his rivals a “sour grapes” claim and got himself a war with the referees.

It was not the referee who beat United at the Bridge, but a Chelsea team that is not prepared to just lie down and surrender their Premier League championship.

That’s the fact delivered by this messenger. I hope Sir Alex does not shoot me.

Thu Mar 31: Tour of London’s Olympic Park. Click here for details of how to apply