Have sports desks used any of the story-getting methods highlighted this week on Panorama? You better Adam ‘n Eve it, says NORMAN GILLER

In a recent SJA column I called for gay sportswriters to come out of the closet. No takers. Today my challenge will, I am sure, draw another blank: Will any sportswriter who has hacked a telephone or computer in pursuit of a story please come forward with a confession?

There is as much chance of that happening as Fergie (not you Sir Alex) attending the royal wedding next month. 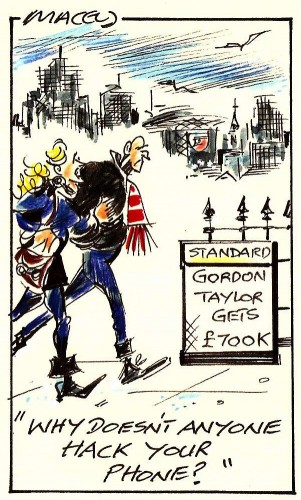 In a way, sport has been at the heart of the phone hacking controversy. Andy Gray, Paul Gascoigne and football agent Sky Andrew are among the jostling queue of celebrities suing the News of the World for invasion of privacy. To think that the PFA’s Gordon Taylor settled out of court for a cool £700,000.

But these are not cases that have involved the News of the World sports department (surely not).

Back “in my day” it was known as phone tapping, and was a far more complicated business than in the world of mobile phones and email. Today you can Google “how to hack a phone” and come up with thousands of advice sites and guidance videos. Pre-mobiles, tapping involved knowledge of electronics and wire circuits.

Eavesdropping has been going on ever since Eve overheard Adam talking about the forbidden fruit. Back in the 1890s, Alexander Graham Bell had hardly got his invention on line, so to speak, than people were finding ways of listening in.

The major sports story where I know for certain Fleet Street reporters were “on the tap” was the Sunday People’s breaking of the Football Bribery Scandal in 1963-1964, which ended with jail sentences for the ringleaders and several prominent footballers including England internationals Peter Swan and Tony Kay.

I once asked Desmond “The Man in the Brown Bowler” Hackett if he had ever tapped a telephone for a story. Des, my revered colleague on the Express for a decade up to 1974, as usual had a wonderful anecdote.

“I would have no idea how to begin to tap a phone, but did once use a glass to try to listen into a conversation. On an England tour of South America I just happened to have the adjoining hotel room to manager Walter Winterbottom. I heard a telephone go and could not resist doing the old glass-to-the-wall routine. Geography was never my strong point and I found myself listening to a husband having a domestic argument on the phone with his wife. I was tuned into the wrong wall.”

I think Des, as came naturally to the Great Entertainer, may have made up that story.

I am not going to be pious and condemn today’s reporters for their phone hacking (alleged, of course). Indeed, in many cases, there is the justification of the “public interest” defence. What I do know for sure is that if it had been as easy to hack into voice mails as it is in these modern times I would, like Des, have found it very hard to resist if in pursuit of a major story.

IT AMUSES ME looking on from the sidelines to see the messengers shooting the messengers. Monday’s Panorama exposé of “the dark arts” used by the News of the World to get their stories was met with a story in The Times accusing the BBC of double standards.

The Times is equally guilty of speaking with forked tongues. The assault on Panorama is one of the few occasions when the usually sniffy sister paper of the NotW has got close to uttering the phrase “phone hacking”.

The scandal is going to run and run, and there will be lots of blood on the Wapping Walls before the suing, the shooting and the shouting is over.

But long after it is all history, reporters will continue to find ways to monitor conversations that can give meat to their stories.  You’d better Adam and Eve it.

THE GUARDIAN misled their online readers this week with what they conveyed as The Economist attacking the 2012 Olympics as being a waste of money. 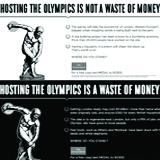 If they had reported the facts with their usual care and accuracy, they would have recorded that The Economist is inviting debate as to whether or not the Olympics are a waste of money.

In-depth for and against arguments can be found in a series running in the paper to coincide with London Olympic tickets going on sale.

As a sports nut who considers the Olympics the greatest show on earth, I am naturally in the “not a waste of money” school.

But had we known a recession was around the corner, my hand would have been raised for the favourites Paris to be allowed the honour of hosting them. They are having a good chuckle with their croissants.

The stance now has to be: We’ve got them, let’s make them the best ever. Let’s all tap into that attitude.