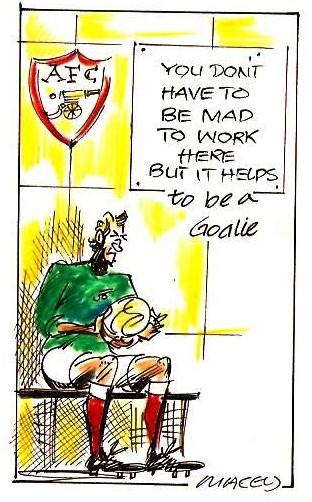 In the week that Tottenham and Arsenal tripped up entering the final straight of the season, NORMAN GILLER focuses on a Gooner putting action where his mouth is

Bob Wilson, a goalkeeping great with Arsenal and Scotland, a sports broadcaster par excellence and a good old friend, is on his bike at the moment somewhere in the Midlands taking on a challenge that questions his sanity.

Throughout his playing career I would always tell Bob: “All goalkeepers are mad and you are madder than most.”

His speciality was to dive head first at the feet of oncoming forwards and rob them of the ball. It was daring, it was dangerous and it was definitely crazy. How he got through more than 300 games with Arsenal without a serious head injury can be measured in miracle terms. For an intelligent man – a qualified schoolteacher – it was difficult to understand why Bob was prone to moments of lunacy when his goal was threatened.

I was at Highbury reporting for the Daily Express the day in 1970-71 (Arsenal’s Double year, 10 years after Tottenham’s) when Bob famously dived forward to dispossess George Best as he arrowed in towards goal.

George described it as one of the finest and bravest saves against him. “In a one on one against goalkeepers I would bet on myself every time,” he said. “This is the only time I can remember a ‘keeper getting the better of me. I cannot believe it.”

Like me, Bob has retreated to dozy, delightful Dorset for his retirement years as we both reach our allotted three score years and ten. Time to put our feet up … but not for Bob, as he proves beyond argument this week that he is as mad as ever.

He has taken on the challenge of cycling 500 miles in 10 days, riding from London to Newcastle on a circuitous route that takes him to every one of the 20 Premier League grounds. He will finish in Glasgow on Royal Wedding day, April 29, ending his journey at Hampden Park where he became the first English-born footballer to play for Scotland in 1971.

On the way Bob will have raised more than £250,000 for the Willow Foundation, the charity that Bob and his lovely wife Megs set up in memory of their daughter Anna, who died in 1998 aged just 31 from a rare form of cancer.

The Willow Foundation has provided more than 7,500 “special days” for seriously ill 16-to-40-year-olds, giving them a break from the stresses of dealing with their conditions.

I have made my donation supporting Bob’s Mission Saddle Sore on line at www.justgiving.com/BobWilsonSoccerCycle.

MENTION OF BOB GIVES me the opportunity to revisit a favourite story of the days when I was chasing deadlines and headlines in the summertime of my reporting career, and Bob was diving into the Highbury Hall of Fame long before the Emirates was a twinkle in Arsenal eyes.

I recall an evening in Rome in September 1970 when Arsenal went to war with Lazio in what was then the Fairs Cup. The match was a bad-tempered affair, with vicious tackles from players on both sides that in today’s sanitised game would have led to a flurry of red cards.

Following the after-match banquet – during which players swapped insults rather than toasts – the new-to-the-road Jeff Powell and I decided to walk off our heavy intake of vino by strolling the two miles back to our hotel. Jeff had filed his match report to the Mail and I had put mine over to the Express. There were no websites to satisfy, no mobile phones to interrupt us, and we were in a liquid-induced peace as we tackled a couple of the Seven Hills in the moonlight. It was so tranquil and romantic that I think we almost got close to holding hands.

Jeff and I had set off on our walk immediately the banquet finished, and we reached the hotel way past midnight, just as the Arsenal team coach pulled up. We were, to say the least, surprised – gobsmacked, even – when the usually impeccably turned out players got off the coach with shirts ripped and some with blood stains on their blazers.

Peter Storey, George Graham and Frank McLintock took turns telling us how they had got involved in a head-butting, fist-flailing brawl with the Lazio players on the pavement outside the banquet. Even “Gentleman Bertie” Mee, their pint-sized manager, had played a fighting role, and had impressed his players with some ABA-style left jabs and hooks. Bob had wisely stayed aloof but confirmed the story as a reliable eye-witness.

Jeff and I dived for the hotel phones in the pre-STD days and managed to garble stories to the late-stop copytakers. Both Jeff and I were rewarded with the magic words: “We are replating the front page”, a phrase that died along with the world of hot metal.

We had been in fear that we’d lost out to the other reporters, who had stayed behind at the banquet venue and would have witnessed the fighting. As we relaxed after putting over our stories, the rest of the Press brigade arrived back at our hotel. The look on their faces when we told them we had filed was both painful and priceless.

“But we decided not to,” my late, great mate Harry Miller of the Daily Mirror told me in a panic. “We didn’t want to drop you in it and the last editions had gone to press.”

It was one of the most heart-warming yet unprofessional things I had ever heard. Talk about esprit de corps, but completely the wrong decision.

They all went into catch-up mode, but it was too late and the only papers that carried the stories in the London editions were the Mail and Express. And Jeff and I were the only reporters who did not witness the fracas.

Moral of the story: File your story first, worry about your colleagues second.

It is dog eat dog out there. It could make you as mad as Bob Wilson.