OWEN SLOT, a past winner at the SJA British Sports Journalism Awards, 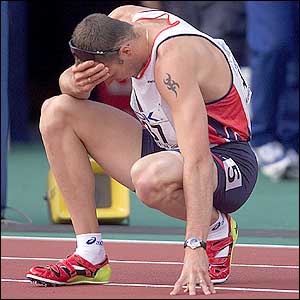 interviews Dean Macey, one of the sportsman to retire in 2008 who we will all miss in 2009 and beyond

We are in his sitting room in his home in Canvey Island, Essex, discussing â€œthe beastâ€, and Macey makes it clear that he is entirely at ease with the deal that he made with it. He also calls â€œthe beastâ€ his â€œself-destruct chipâ€ â€“ his refusal in training to do anything other than push his body to its limits.

â€œThereâ€™s a time and a place to unleash the beast,â€ he said, â€œand I struggled to identify when that time was. The passion took over all the time. There are times in training when you do have to go for it. But you canâ€™t be 100 per cent all the time for nine months. I unleashed the beast every day. Towards the end of my career, on the days when I agreed to train easy, I had physios, doctors, parents ringing me up to remind me.â€

More on vomiting: â€œI loved chucking my guts up. I donâ€™t like the feeling, no, but I loved knowing that Iâ€™ve pushed myself to the point where my body doesnâ€™t want to go any farther and thinking: â€˜Right, Iâ€™m better than where I was an hour ago.â€™ I loved pushing myself to the point where I was thinking: â€˜Probably no one else in the world could do this.â€™ â€

At his best, Macey knows that he was a match for the leading decathletes of his generation â€“ Roman Sebrle, the Czech, and Bryan Clay, of the United States. His attitude to training, however, inflicted on him such an injury toll that he will never know if that was a match he would have won. The only leading decathlon he finished completely fit was when he won his silver medal in 1999.

Thereafter they were all heroic battles; his Commonwealth gold came only three weeks after a grade-two hamstring tear. â€œI liken it to having a winning lottery ticket but then someone saying: â€˜Yes, youâ€™ve won the lottery, but you canâ€™t cash that,â€™ â€ he said. â€œI felt I had the talent to accomplish anything, but I always pushed myself that bit too far.

â€œIn the ten years I was pro, if Iâ€™d trained at 85 per cent, I may have remained uninjured and definitely come in the top six of every major championship, and Iâ€™d have picked up medals because there were some weak ones here and there. But Iâ€™d have had no chance of a gold. And I wasnâ€™t prepared to do that. Thatâ€™s why I got hurt, because I wouldnâ€™t settle for second best.â€

This approach did not always produce the breezy, bubbly, jack-the-lad of his public persona.

He missed the 2002 Commonwealth Games in Manchester, for instance, â€œthe biggest disappointment of my entire career bar noneâ€, when he unleashed the beast in training and snapped a hamstring.

â€œIt took probably the whole of that summer to get the disappointment out of my system,â€ he said. â€œIt was massive. I donâ€™t know how close it was to costing me my marriage, but I know that I was a real fucker to live with for a long time. My wife, Lisa, being there every day and training with me most of the time, takes the brunt of it. She is such a good girl to put up with me. Lots of women would have walked out.

â€œPeople always assumed I was great at dealing with things but I wasnâ€™t. Iâ€™d come home and smash dishes and pull doors off. Lisa was brilliant. She would let me blow my top and then say: â€˜Right, you finished? Letâ€™s go down to Homebase and sort this all out.â€™â€

The end for Macey was not how he imagined it. â€œIâ€™d always seen myself in Beijing,â€ he said, â€œstanding on the line for the 1,500 metres, knowing this was the last 1,500 metres Iâ€™d ever run and smashing it, just taking myself to the point where I would tear my guts open. Whatever it took, Iâ€™d go out on a high.â€

Instead, his last attempt to hit the Olympic qualifying standard show-cased a final, heartbreaking battle. He had already missed three monthsâ€™ winter training with a slipped disc, but in Hexham, Northumberland, in July he tore one side of his groin in the long jump, the other in the pole vault and, 14 pain-killing injections later, realised that he simply could not move to throw the javelin.

How does a proud man deal with retirement? â€œI struggled for three months,â€ he said. â€œIâ€™d walk around and just start filling up. Iâ€™d wake up lost. I didnâ€™t know what to do. My emotions were so intense I felt Iâ€™d lost a member of the family. Iâ€™d lost a major part of my life, something was dead. Everything Iâ€™d lived for was over.

â€œAnd my mum and Lisa were in tears a lot. They wanted me to give it another go next year, but the reason I retired was I didnâ€™t believe any more I could stay healthy. Once my belief went, I didnâ€™t see light at the end of the tunnel.â€

There will be no comeback. To make the point, Macey sold his poles and javelins. The shots and discuses are waiting to go.

Instead, he has myriad corporate and media opportunities to explore. What he really enjoys is fishing and there are some television and print opportunities here, too. But where he really sees his future is as a personal trainer, maybe with his own gym, and in athletics, at any level.

â€œI think Iâ€™ve got a lot to offer,â€ he said. â€œI could be saying to kids: â€˜Listen to what I say because I may help you avoid a major disaster.â€™ â€ If only, one concludes, he had been able to heed his own advice. But Macey would disagree. And he certainly would not court sympathy. â€œI regret getting hurt, but I donâ€™t regret why I got hurt,â€ he said, almost as an epitaph to his career. â€œI got hurt because I tried hard.â€

Darren Anderton (football). Aged 36, in his 569th club appearance, signed off this month with the only goal in Bournemouthâ€™s win against Chester City.

David Coulthard (Formula 1). Aged 37. Won 13 grands prix. Final race was at Interlagos â€“ he spun off after being hit on the first lap.

Lawrence Dallaglio (rugby union). Quit England duty with the 2007 World Cup final as his last game. Retired altogether, aged 35, after leading Wasps to victory in the Guinness Premiership final against Leicester at Twickenham.

Darren Gough (cricket). Aged 38, lasted magnificently for a fast bowler, though his body, not his spirit, eventually gave way.