TALES FROM THE TOY DEPARTMENT: To conclude our series celebrating 60 years of sports journalism, we reprint HUGH McILVANNEY’s 1980 account of the fateful final fight of boxer Johnny Owen

It can be no consolation to those in South Wales and in Los Angeles who are red-eyed with anxiety about Johnny Owen to know that the extreme depth of his own courage did as much as anything else to take him to the edge of death. This calamitous experience could only have happened to an exceptionally brave fighter because Lupe Pintor, the powerful Mexican who was defending his World Boxing Council bantamweight championship against Owen, had landed enough brutal punches before the 12th and devastatingly conclusive round to break the nerve and resistance of an ordinary challenger. The young Welshman was, sadly, too extraordinary for his own good in the Olympic Auditorium.

In the street, in a hotel lounge or even in his familyâ€™s home on a Merthyr Tydfil housing estate, he is so reticent as to be almost unreachable, so desperately shy that he has turned 24 without ever having had a genuine date with a girl. But in the ring he has always been transformed, possessed by a furious aggression that has driven his alarmingly thin and unmuscular body through the heaviest fire and into the swarming, crowding attacks that gave him a record before Friday night of 24 victories, one defeat (avenged) and one draw in 26 professional matches.

That record was built up in Europe and its reward was the European bantamweight championship and acceptance as a contender for the world title. Given the basic harshness of boxing as a way of earning a living, no one could blame Owen or his father or his manager, Dai Gardiner, for going after the biggest prize available to them, but some of us always felt that the right to challenge Pintor in Los Angeles was a questionable privilege.

Making some notes about the background to the fight on Friday morning, I found myself writing: “Feel physical sickness at the thought of what might happen, the fear that this story might take us to a hospital room.”

This scribble was not meant to imply any severe criticism of a match which, on the basis of the relevant

statistics, could not be condemned as outrageous. Indeed, the apprehension might have been illogically excessive to anyone who set Pintorâ€™s career figures of 41 wins, seven losses and a draw against the fact that Owenâ€™s one defeat had been a blatant case of larceny in Spain and the further, impressive fact that he had never been knocked off his feet as a professional boxer.

Yet it is the simple truth that for weeks a quiet terror had been gathering in me about this fight. Perhaps its principal basis was no more than a dread that the frailty that the boyâ€™s performances had hitherto dismissed as illusory would, some bad time in some bad place, prove to be terribly real. There is something about his pale face, with its large nose, jutting ears and uneven teeth, all set above that long, skeletal frame, that takes hold of the heart and makes unbearable the thought of him being badly hurt. And, to my mind, there was an ominous possibility that he would be badly hurt against Pintor, a Mexican who had already stopped 33 opponents and would be going to work in front of a screaming mob of his countrymen, whose lust for blood gives the grubby Olympic Auditorium the atmosphere of a Guadalajara cockfight, multiplied a hundred times.

No fighters in the world are more dedicated to the raw violence of the business than Mexicans. Pintor comes out of a gym in Mexico City where more than a hundred boxers work out regularly and others queue for a chance to show that what they can do in the alleys they can do in the ring. A man who rises to the top of such a seething concentration of hostility is likely to have little interest in points-scoring as a means of winning verdicts.

So it was hard to share the noisy optimism of the hundred-odd Welsh supporters who made themselves conspicuous in the sweaty clamour of the hall and brought a few beer cups filled with urine down on their heads. But they seemed to be entitled to their high spirits in the early rounds as Owen carried the fight to Pintor, boring in on the shorter, dark-skinned champion and using his spidery arms to flail home light but aggravatingly persistent flurries of punches.

The first round was probably about even. Owen might have edged the second on a British scorecard and he certainly took the third, but already Pintorâ€™s right hooks and uppercuts were making occasional dramatic interventions, sending a nervous chill through the challengerâ€™s friends around the ring.

IT WAS IN the fourth round that Pintorâ€™s right hand first struck with a hint of the force that was to be so overwhelming subsequently, but this time it was thrown overarm and long and Owen weathered it readily enough. He was seen to be bleeding from the inside of his lower lip in the fifth (the injury may have been inflicted earlier) but, since both Pintorâ€™s eyebrows were receiving attention from his seconds by then, the bloodshed seemed to be reasonably shared. In fact the laceration in the mouth was serious and soon the challenger was swallowing blood. He was being caught with more shots to the head, too, but refused to be discouraged and an American voice behind the press seats said incredulously: “I donâ€™t believe this guy.”

Pintor was heaving for breath at the end of the fifth but in the sixth he mounted a surge, punished Owen and began to take control of the contest. The official doctor, Bernhard Schwartz, checked the lip for the second time before the start of the eighth, which made the abrupt disaster of the ninth all the more painful.

Pintor smashed in damaging hooks early in the ninth but their threat appeared to have passed as the round moved to its close. Then, without a trace of warning, Pintor dropped a shattering right hook over Owenâ€™s bony left shoulder. The blow hurled him to the floor and it was here that his courage began to be a double-edged virtue. He rose after a couple of seconds, although clearly in a bad condition. There was a mandatory eight count but even at the end of it he was hopelessly vulnerable to more hooks to the head and it took the bell to save him.

By the tenth there was unmistakable evidence that the strength had drained out of every part of Owenâ€™s body except his heart.

He was too tired and weak now to stay really close to Pintor, skin against skin, denying the puncher leverage. As that weariness gradually created a space between them, Pintor filled it with cruel, stiff-armed hooks. Every time Owen was hit solidly in the 11th the thin body shuddered. We knew the end had to be near but could not foresee how awful it would be.

There were just 40 seconds of the 12th round left when the horror story started to take shape. Owen was trying to press in on Pintor near the ropes, failed to prevent that deadly space from developing again and was dropped on his knees by a short right.

After rising at three and taking another mandatory count, he was moved by the action to the other side of the ring and it was there 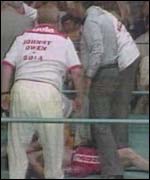 that a ferocious right hook threw him on to his back. He was unconscious before he hit the canvas and his relaxed neck muscles allowed his head to thud against the boards. Dai Gardiner and the boxerâ€™s father were in the ring long before the count could be completed and they were quickly joined by Dr Schwartz, who called for oxygen.

Perhaps the oxygen might have come rather more swiftly than it did but only if it had been on hand at the ringside. Obviously that would be a sensible precaution, just as it might be sensible to have a stretcher immediately available. It is no easy job to bring such equipment through the jostling mass of spectators at an arena like the Auditorium, where Pintorâ€™s supporters were mainly concerned about cheering its arrival as a symbol of how comprehensive their manâ€™s victory had been. The outward journey to the dressing-room, with poor Johnny Owen deep in a sinister unconsciousness, was no simpler and the indifference of many among the crowd was emphasised when one of the stretcher-bearers had his pocket picked.

There have been complaints in some quarters about the delay in providing an ambulance but, in the circumstances, these may be difficult to justify. Dr Ferdie Pacheco, who was for years Muhammad Aliâ€™s doctor and is now a boxing consultant with NBC in the United States, insists that the company lay on an ambulance wherever they cover fights but no such arrangements exist at the Auditorium and the experienced paramedics of the Los Angeles Fire Department made good time once they received the emergency call.

CERTAINLY IT WAS grief and not blame that was occupying the sick boyâ€™s father as he stood weeping in the corridor of the California Hospital, a mile from the scene of the knockout. A few hours before, I had sat by the swimming pool at their motel in downtown Los Angeles and listened to them joke about the calls Johnnyâ€™s mother had been making from Merthyr Tydfil on the telephone they had recently installed. The call that was made to Mrs Owen from the waiting-room of the California Hospital shortly before 7 a.m. Saturday, Merthyr time (1 1 p.m. Friday in Los Angeles) had a painfully different tone. It was made by Byron Board, a publican and close friend of the family, and he found her already in tears because she had heard that Johnny had been knocked out.

The nightmare that had been threatening her for years had become reality. She can scarcely avoid being bitter against boxing now and many who have not suffered such personal agony because of the hardest of sports will be asking once again if the game is worth the candle. Quite a few of us who have been involved with it most of our lives share the doubts. But our reactions are bound to be complicated by the knowledge that it was boxing that gave Johnny Owen his one positive means of self-expression. Outside the ring he was an inaudible and almost invisible personality. Inside, he became astonishingly positive and self-assured. He seemed to be more at home there than anywhere else. It is his tragedy that he found himself articulate in such a dangerous language.

The doctorsâ€™ struggle to rescue Johnny Owen from deep coma proved to be hopeless and he died in the first week of November 1980. His body was brought home to be buried in Merthyr Tydfil.

This article first appeared in The Observer and is extracted from McIlvanney On Boxing (Mainstream Publishing).

Ovett and Coe: we will never see their like again, by Randall Northam

Delving into the darker corners of sport – Andrew Jennings on investigations

Glorious nights in 60 years of sports awards, by David Hunn

Cheaper, but no better – a review of sports journalism in 2008