Twenty years ago, international sport – and the map of Europe – was very different. PHILIP BARKER remembers being the only British journalist at the 1989 East German athletics championships

Their sports machine was still in full cry. Pound for pound, the German Democratic Republic dominated world athletics. Yet many in the west questioned the mysteries of their methods conducted behind firmly guarded locked doors.

So a chance to see them competing in their own back yard was not to be missed.

It was the first year of the pan-European sports channel Eurosport. Head of programmes Adrian Metcalfe had arranged with East German television permission to transmit highlights of the event, and I was to collect daily tapes together with as much information on events and the participants as possible. A couple of days later, Ian Darke and Stuart Storey would add commentary â€œoff tubeâ€ in London.

First port of call was the East German mission for a visa. There, a humourless Dolf Lundgren lookalike stamped my passport. Before being deemed ready to enter the glorious GDR, there was an information handout to digest.

â€œIt was no miracle that brought about the successful development of sport in the GDR,â€ it said â€œThese results are due to our socialist system and policy towards young people which offers them every opportunity to develop.â€

It omitted to say that they also offered them little blue pills from a State-owned pharmaceutical company, or that the country

bankrolled a doping programme, overseen by its secret police, which would have a devastating impact on the lives of the young people who took the drugs (and in many cases, eventually on their children, too).

But according to the leaflet, their success was down to the â€œmodern socialist system of societyâ€ in which the top athletes â€œwho come from the masses always feel connected with their socialist home country even when thousands of miles at home.â€ Again, there was no mention of the thousands who did not feel that connection and were fleeing through the now open borders to Hungary that very summer.

I headed to the small northern town of Neubrandenburg for the championships. Many of the roads were cobbled. The only cars were Trabants and the slightly more sophisticated Wartburg, based on a not-very-good 1970s Renault.

My priority was to make contact with the production team for the state television company. They had checked into the same hotel, although that was not altogether surprising, as it was only hotel in town.

Named after the Neubrandenburgâ€™s iconic four gates, the â€œVier Torâ€was a 1960s eastern Europe monstrosity – all concrete and polished wood. In each room there was an ageing Russian-made black and white television which took a few minutes to splutter into life. Along the corridor was a ballroom laid out with tables and music playing to an empty room.

It was all rather eerie. At the reception desk to change some money, the concierge looked around furtively and then whispered, â€œDo you wish to change it ‘black’?”

Transaction completed, we made our way to the Jahn Stadion (named after the a 19th century sports teacher, Ludwig Jahn). The home of Neubrandenburg Sports Club, the sports centre’s gym served as the press centre.

Although there were no international championships that year, team selection was still important with the European Cup in Gateshead and the World Cup in Barcelona later in the summer. A very respectable crowd of spectators gathered at tea time on the first evening.

On Saturday morning there was a media reception. They asked, “You are interested in the vodka?â€ I looked at the clock, it was five past nine. One or two of our colleagues from the Soviet Union had clearly been â€œ interested in the vodkaâ€ since a much earlier hour and they toasted us from halfway down their seats.

I asked whether they had any English newspapers. â€œYes, of course,â€ came the response. â€œWe have the Daily Worker and the Morning Star.â€

Also available was the local party paper Freie Erde and Neues Deutschland, the newspaper for the proletariat in Berlin. Both were broadsheets with only eight pages, they featured scintillating tales of agricultural success, plans to celebrate the 40th anniversary of the GDR that autumn, the youth Spartakiade that had just begun and, of course, the athletics.

Background sports info was scarce. The helpers in the press centre cheerfully photocopied an ageing results and stats file for my benefit.

In the evening, someone shouted, â€œThere goes Waldemar Cierpinski,â€ and indeed there was the 1976 and 1980 Olympic marathon champion taking a late run, and still sporting his 1970s sideburns – although in East Germany on the eve if the 1990s, he did not seem to be out of fashion. 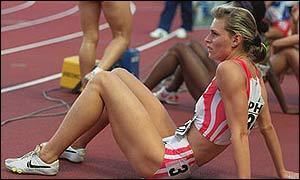 track, local athletes were on the victory rostrum. Most eye catching of all was the sprinter, Katrin Krabbe, tall and blonde and certain to become a pin-up throughout the GDR and even beyond.

Her clubmate, Grit Breuer, was a stocky-looking 17-year-old who won the 400 metres. They wore the simple orange and blue vests of the hometown club.

Krabbe and Breuer had revealed their talent the previous year at the World Junior Championships. Both were destined to win major championship golds and also be banned for doping offences in which their coach was implicated.

In the maroon candy striped vest of Dynamo Berlin was Petra Felke, the big-shouldered Olympic javelin champion. Hers, it was known, was the club of choice to the Stasi.

Before the meeting was over, they made a presentation to retiring athletes. a ritual accompanied by rhythmic clapping as the champions departed the arena.Many of their achievements would later be tainted by revelations of state sponsored doping.

It was the last time it would ever be awarded. In October that year demonstrations showed just how many Germans hated their â€œsocialist paradiseâ€. Mikhail Gorbachev made it clear that the Soviet Union would not stand in the way and soon Party Secretary Honecker was swept from power.

Within a few days, the Wall that Honecker had had built was gone too. Soon, that notorious national acronym “DDR” would vanish from world sport, along with the anthem which had become such a hauntingly familiar soundtrack in sport in less than 30 years. International sport would never be the same.