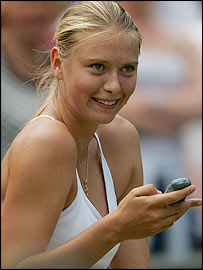 For celebrities, there is the curse of Hello! magazine, as a number of couples have invited photographers into their “sumptuous homes” and then split up not long afterwards.

For professional tennis players at Roland Garros, there is the curse of the tournament programme, as, every day this year, the player who has been chosen as the image for the front has gone on to lose that very day.

Maria Sharapova became the latest cover-star to go out. Of all her magazine covers, the front of the tournament programme was somewhere she really didn’t want to be.

“Maria, full of grace,” it said under a picture of the perfumed Siberian, but the former world No 1 did not look so poised when she found herself at 0-6, 0-5 and match point down in her quarter-final against Dominika Cibulkova, of Slovakia.

Sharapova, playing at her first grand slam since last summer’s Wimbledon, saved a match point with a

But having only returned to the tour in Warsaw last month, after missing nine months of tennis because of a shoulder injury, Sharapova was soon out of the tournament, with a 6-0, 6-2 defeat, Cibulkova reaching the semi-finals of a major for the first time.

To read the rest of this report, click here