The “Olympic Effect” is being felt by many sports in Britain, but not quickly enough in basketball for Andrea Congreaves, the former WNBA star. From insidethegames.com

For Andrea Congreaves, retirement beckons after a job well done. The former star of the WNBA brought the curtain down on her international 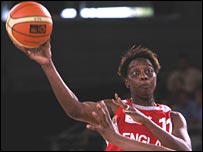 career last week having helped Britainâ€™s revitalised womenâ€™s basketball team complete its Eurobasket season with a 100 per cent record by beating the Netherlands 60-58.

The veteran centre led Britainâ€™s scoring with 14 points and was delighted that she had helped Britainâ€™s women, like their male counterparts, to qualify for the 2009 European championships, and so boost their hopes of taking a spot at the 2012 Olympics.

But Congreaves also issued a warning for her sport to grasp their opportunity now, and not wait for 2012 to turn their fortunes around.

â€œWe need something to happen now for basketball to establish itself as a proper professional sport in Britain – not just for the men, but for women, too,â€ says Congreaves, now 37, whose career has seen her play professionally in the United States and win national titles in Italy, Spain and France before taking a Commonwealth Games bronze medal for England in Melbourne last year.

Congreaves is the player-coach at Coca-Cola Rhondda Rebels, the only fully professional womenâ€™s team in British basketball. â€œAt the moment, we still have a lot of the players in the GB squad who have to take time off work just to come and train or to

â€œThese are players who are coming up against teams of full-time professionals, where they take care of the players. It makes such a huge difference to the way you are able to prepare and play the game.

â€œThis year has been incredible. When I first started playing for England and GB, we might have a couple of weekend get-togethers and then a couple of sessions of practice and we were straight into a game. We hardly had a chance.

â€œBut here, weâ€™ve had a block of six or seven weeks, living together, training together, playing together, like a properly professional team, and you can see the results in the scores. It all reflects on what can be achieved.

â€œWhen I started out, there were other top players like Fiona Murray and Anita Curtis, and I am sure that if they were around today they would be a benefit to the team, because we still have a lot to learn and improve.

â€œBut now, as we all go back to our clubs, the sport needs to find some backing from somewhere to help us move up to that next level. Undoubtedly, we need to get some television exposure.â€

Understandably for a player with such an impressive playing CV in America and Europe, Congreaves is saddened that her sport does not enjoy the highest profile – or a similarly professional league – in her home country.

â€œWhen I first started out, the big club was at Crystal Palace, where they had professional menâ€™s and womenâ€™s teams and they were huge. There was TV coverage of the British game then, but any basketball club in London has a tough task, competing for public attention against football, rugby and cricket.

â€œBasketball in Britain does seem to go in waves of public attention – we need to make sure that we harness that now, and not sit around and wait for some big boost to come along with the London Olympics in 2012.â€

After her experience of playing for Como, Barcelona and Bourges – where she played in a European Cup final – it is not surprising that Congreaves’ advice to teenaged basketball players following her is to look to Europe, rather than the US, for a possible professional career.

â€œIf you want a college education for four years, or if you can be one of the very top-most players, then sure, try America,â€ she says. â€œBut for middle and lower tier professional players, Europe is probably better. It is better paid for those players, and thereâ€™s not the tax like there is in America.

â€œCertainly, for high quality professional basketball, the standard in Europe is very good, and it is the sort of thing we should be aiming to establish in Britain.â€

This is an edited version of an interview published by insidethegames.com, which offers a 20% discount on annual subscriptions to all SJA members. Click here for more details