“What do you think of it so far?” asked Ken Walker, swirling around the remains of his pint of Chatsworth Gold before downing the final mouthful and placing the empty glass on the table with that flourish that unequivocally says: “It’s your round”. 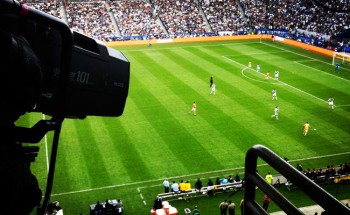 Along with my fellow SJA member – and leading international kart commentator, I’m sure he would like me to say – I was sitting outside the Devonshire Arms in the pretty north Derbyshire village of Pilsley where Ken was taking a few days break before heading for a gig in Germany.

“What do I think about what?” I said, ignoring his empty glass for the time being.

“TV coverage of the World Cup,” said Ken. “I haven’t seen much of it myself, what with travelling around. But I understand that it’s been patchy.”

Now, what with Adrian Chiles being such an easy target, it would be have been hugely convenient to spend the next 20 minutes telling Ken how I thought that this particular West Brom fan was hell-bent on rewriting the instruction manual to car-crash television. But my old Mum always used to tell me that if you can’t say anything good about someone, then don’t say anything at all. So I’m going to leave Adrian scowling on the ITV sofa in Rio, and move into more positive territory. Especially since ITV can’t even agree on how to pronounce the name of Colombia’s James Rodríguez, or seem to realise that Al Jazeera is a Gulf-based TV station and not an actual country in north Africa.

“On BBC, I liked Clarence Seedorf,” I said. “He is elegant, witty, charming, and not given to stunningly silly comments – I’ll come on to Robbie Savage in a minute – and Thierry Henry was good before he had to leave. Danny Murphy is excellent, too.

“But then you must have heard about how Phil Neville managed to send a whole nation into a coma; I’m told that burglars go on the prowl when he is on air. And Gary Lineker keeps using the wrong words – the other evening he described a situation as ‘incredulous’.

“Still, you don’t have to listen to any of it. I mean, you don’t need football explaining to you when you actually go to a match. And if they could introduce a button where you could just have the crowd noise without the commentary, then I would use it.”

“I think Sky used to have some such facility,” Ken said, “but for some reason they withdrew it.”

“Maybe too many people were using it?” I suggested.

“What about Savage, then? asked Ken.

“Well,” I said, “it was just when he suggested that Glenn Hoddle should take over the whole England set-up. Alan Shearer’s face was a picture. I’m only sorry that Lineker wasn’t mischievous enough to ask Shearer to comment on the prospect.”

As we were “oop North”, it was only natural that the Tour de France would come into the conversation. The first two stages are almost all in Yorkshire, but the race and its attendant entourage does nip into Derbyshire for a few miles this Sunday. And that is annoying some of the locals. Well, actually, they aren’t all that local, which is what is annoying them because although they live 15 miles from the route – which is on the A6024 near Holme Moss before following the A628 Woodhead pass towards Sheffield – they won’t be allowed to park outside their homes that day.

Glossop resident Stewart Higginbottom, told the Mirror: “I haven’t got a clue what I’m going to do. We don’t know where we can move the cars to and no one has said what will happen if your vehicle gets towed away, where we’d get it back from and how much we’d have to pay.

“They’re only turning a corner on the Woodhead Pass, which is miles away from here. If they were going pass my door I’d accept it, I’d even watch it, but I don’t know anyone who’s that interested.”

Another resident, Jim Allman, added, with typical Derbyshire logic: “Anyway, it’s called the Tour de France – so why don’t they keep it in France?”

Actually, I’ve often wondered that. Had to leave it there, though. Ken was now tapping his pint glass on the table.