There’s still the pall of the Pakistan betting scandal, but this sporting week in quotes, by IAN COLE, is dominated by Wayne Rooney, whether he plays or not, plus Strictly Come Dancing, F1’s Lewis Hamilton, Tiger Woods on the Ryder Cup, Ken Bates on the media and Tony Blair, Kenny Dalglish on The Sun and Hillsborough, and Jamie Redknapp on Fernando Torres 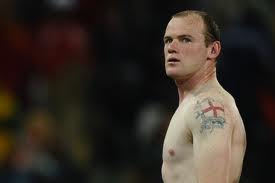 “We’ve made the decision because he gets terrible abuse here and we don’t want to subject him to that” Sir Alex Ferguson leaves Wayne Rooney out of Manchester United’s team at Everton.

“Perhaps he was just making sure everybody realises that if you play for Manchester United you have to conduct yourself in a manner, and our club doesn’t really care who you are” David Moyes, the Everton manager.

“I told you he’s been okay in training. I had seen that. The players want to play without other things on their minds. They can focus on the game alone. He did that. He was really happy at the end” Fabio Capello stands by Rooney for the Euro 2012 qualifier against Switzerland and is rewarded with a goal from the striker.

“It is vulgar entertainment for the masses. I doubt that Locke, Hobbes, Milton and Mill would have foreseen where their campaigns for freedom of the press would lead” Roy Greenslade, the media commentator, takes a view on the News of the World‘s Wayne Rooney sex allegations.

“The media call me controversial because I talk straight. They slag me off from their ivory towers. Sports writer of the year? What does that mean? A load of plonkers voted him the least worst of the rest of them” Ken Bates, the Leeds chairman, in interview with Brian Viner, shows that his contempt for those who question his approach to business and football remains undimmed.

“On the day that Wayne Rooney’s transgressions were made public, I received the following email: ‘William Hill are offering odds of 6-4 that Wayne Rooney will be facing divorce proceedings before Christmas Day 2010. Hills also quote 33-1 that Rooney will score – a goal – when England play Switzerland this week AND unveil a t-shirt bearing a “Sorry” message to Coleen.’…

“Now, normally I shouldn’t dream of publicising the puerile fantasies of parasitical chancers who plunder vast amounts from sport while offering next to nothing in return. But you should be aware of the depths they are prepared to plumb” Patrick Collins in trenchant mood in his Mail on Sunday column.

“I have a photo of George Best on the wall of my office at Blackpool and how his life went is one of the saddest things ever. He was one of the most brilliant players of all time, but he was the world’s first superstar footballer and it cost him. I think we may have a lot more George Bests around if we’re not careful” Ian Holloway offers a warning over over-indulged, over-paid young footballers.

“The police raced to the scene, breathalysed Balotelli and interviewed him. The breath test was negative, but the police demanded to know why a 20-year-old, who speaks faltering English, was carrying £5,000 cash in his back pocket. Balotelli’s response was honest: ‘Because I am rich’.” Report after Mario Balotelli wrote off his £120,000 Audi supercar on his way to training at Manchester City.

“It’s mistakes like the one I made today that lose world championships. I only have myself to blame” Lewis Hamilton after crashing on the first lap at Monza.

“Every cricketer in the world has received a short, sharp slap in the face as to where the game is at the moment. But I don’t worry for the future of cricket. It has survived many controversies and will continue to do so” Andrew Strauss, the England captain.

“Sometimes I wish we were living in a Muslim country so we could have racing without gambling” James Given, racehorse trainer, interviewed in the Racing Post.

“See that headline you put in, ‘THE TRUTH’? Just have another one, as big: ‘WE LIED. SORRY’.” Kenny Dalglish, in his autobiography, recounts an abrupt telephone conversation with the then Sun Editor, Kelvin Mackenzie, after the Hillsborough disaster in 1989.

“I am not getting any younger but I still back myself against anyone. I know I could still be playing at a relatively high level. When I get the ball in training it all comes back. I’m not trying to rekindle something. It’s just there” Jason Robinson, 36, England’s World Cup-winning wing, comes out of retirement after three years to play for Fylde in National League 2N.

“I don’t watch Strictly Come Dancing, I’ve got better things to do with my time. He is a talented player but he will have to train hard and play well if he wants to play for Wales again” Jamie Roberts reacts with scorn to former Wales team mate Gavin Henson’s announcement that he is aiming at a return to the national team while signing for a series of the TV dance contest.

“I’ve always loved the Ryder Cup. The team bonding that occurs, getting to know the guys, are experiences you never forget and I’ve created great friendships because of it” Tiger Woods.

“I’m glad we’ve fallen out because it makes it easier for me to destroy him. I’m not just going to knock him out. I’m going to hold him up through three or four rounds of devastation. It will be violent and prolonged. A public execution” David Haye who meets fellow-Brit Audley Harrison to defend his WBA heavyweight title.

“If I am guilty of anything it is naivety and trusting those I believed were working in the best interest of snooker and myself” John Higgins, the former snooker world champion, after a six-month ban and £75,000 fine after  match-fixing allegations.

“Our aim at Wolves is never, ever to go out and kick anyone. It’s to get close and win the ball. I know there are bad fouls and people have to be punished but I was sent off at the Emirates last season and it was so unjust. This is still a contact sport. Tackling should be allowed” Karl Henry, the Wolves captain, responds to criticism of his side’s physical approach.

“I know Bobby, we have the same agent and we were away together with England under-21s. I would never go out to hurt anyone, let alone him. I am sorry I have done any damage because that is the last thing I would have wanted”  Henry after his tackle results in a broken leg for Fulham’s Bobby Zamora. No foul was given.

“I’m his biggest fan and I love seeing him. But fans won’t suffer a lack of effort. For 45 minutes he has been terrible. He hasn’t got hold of the ball, he hasn’t chased, he’s got frustrated. He’s been diabolical” Jamie Redknapp on another lacklustre performance from Liverpool’s Fernando Torres against Birmingham.

“If you give away free tickets, you’re being generous with the money of the guy who stands behind the goal and can’t afford to go on holiday. When I was chairman at Wembley we had Tony Blair as guest of honour. That meant an invitation for him and his wife. But we got a request for five tickets, all in the front row. I told them to fuck off” Bates, whose contempt appears to extend to everyone.

“I was riding round Darley Hall stud and I thought this particular horse looked familiar. So I went over, said ‘Hello’, gave him a pat. I hadn’t seen him for three years. Did he recognise me? You must be joking. He’s got other things on his mind – like plenty of sex” Frankie Dettori bumps into Authorized, on whom he won the 2007 Derby.

“There is nothing more we can do, so that’s the end of the road. I’m proud of everything she has achieved but she does not want to play ball on the track” Michael Bell, trainer of Sariska, winner of the English and Irish Oaks last year, after she once again refuses to leave the stalls.