“It was very difficult, Liverpool played a good game, with three at the back. We were not expecting that and maybe they took advantage” Fernando Torres, Chelsea’s £50 million man, taken off after an hour of his home debut against his former club, who won 1-0.

“I think when someone is seeing in front of him the end of his future and his career, that is the worst day of one’s life. Cricket is very important for my life, it’s the most important thing in my life. My whole family depends on me and of course I depend upon cricket” Mohammad Amir, the 18-year-old Pakistan pace bowler, given a five-year ban by the ICC for his part spot-fixing during the summer tour of England.

“Coach Lombardi’s trophy is finally going back home” Mike McCarthy, the Green Bay Packers coach after their 31-25 win over the Pittsburgh Steelers for their first SuperBowl win since 1997.

“It’s a corporate crime to spend £500 million on a stadium and, just four weeks after the Games have finished, bring the bulldozers in” Karren Brady, the West Ham executive, leaves no doubt about her views of Tottenham’s bid for the Olympic Stadium.

“He’s got a big smile on his face, but he’s that sort of lad. He’s a happy guy and a good guy” Kenny Dalglish sees £22.8m signing Luis Suarez score on his debut, his first match since serving a seven-match ban for biting an opponent.

“It shows that Chelsea are supporting UEFA’s Financial Fair Play campaign. In the morning they announce a £70 million loss, in the afternoon they spend £75 million on new players. Officially, they vote for it, so they can explain better than I what they are doing” Arsene Wenger. 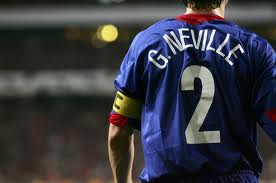 “I have been a Manchester United fan all my life and fulfilled every dream I’ve ever had. Obviously I am disappointed that my playing days are at an end, however it comes to us all, and it’s knowing when that time is and for me that time is now” Gary Neville announces his retirement, at 35, with immediate effect, after being left out of Manchester United’s Champions League squad.

“This is a crazy time of year for doing business and only the needy step into the market. You can sense Arsene Wenger and Alex Ferguson sitting back and watching in the knowledge their squads are prepared for the months ahead. The rest of us have to get into the bear pit and fight for our lives” David Sullivan, the West Ham co-owner, welcomes the end of the January transfer window.

“They need a couple of players, maybe even two” Chris Waddle offers in-depth analysis on ESPN.

“Well, that is debatable… Well, it’s only debatable in the sense of theoretical, because you don’t debate the referee’s decision until he’s made it. I’m not talking about the offence. It is an offence. I just wonder whether it’s not in the red zone. Look, let’s stop talking about it” Brian Moore, unusually uncertain, during commentary on England’s victory over Wales in Cardiff in the opening game of their year’s Six Nations rugby championship.

“I have been in the headlines for the wrong reasons. When I’ve been travelling to Sunday games I’ve read the papers and looked at those headlines. But then I’ve scored the winner against Arsenal, so it shouldn’t really bother me because I have proved I can score goals” Andy Carroll, Liverpool’s £35 million signing.

“There are things in swimming I would still like to achieve” Ian Thorpe, Australia’s five-time Olympic gold medallist, comes out of retirement with London 2012 in his sights.

“The wheel goes round, and this time it’s on the other foot” Geoffrey Boycott.