Lee Horton, the former sports editor of The People, has been jailed for 15 months after being convicted of fraud. 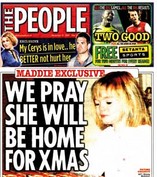 The court found that over an eight-year period, Horton abused his position to “invent” 1,690 claims by contributors for sums between £150 and £390; all the claims were less than £500, the trigger amount for referral for approval.

The court found that Horton created 12 different accounts to receive the payments, which over the period amounted to £370,406.

The court heard that Horton used the cash to pay for his daughter’s education, gave donations to the school, gave to a Down’s Syndrome charity and even took some colleagues on a golfing holiday.

David Levy, prosecuting, said Horton admitted when he was caught to being “greedy” and “ridiculously generous” with other people’s money. The scam was described in court as “professional” and “complex”. Horton started to make payments to himself in 2000, and was not discovered by his employers at Trinity Mirror until 2008.

Following an investigation by the company, in September 2008 Horton agreed to a civil judgment against him and paid back nearly £300,000. The remainder will be repaid when his house in Chelmsford is sold.

Tara McCarthy, defending, said: “He has lost everything. His home, his pension and he is probably going to lose his wife.

“And he is never going to be able to work in the industry which he absolutely adores, as a newspaperman and journalist, because I would be very surprised if anybody wanted to employ him.”

Sentencing him, Judge Price said: “You have been suffering from anxiety and depression and to cap it all off your wife is taking divorce proceedings.

“It is an extraordinary and sad case. It distresses me to do what I have to do.”

He added: “I regard you as a decent man who fell foul and behaved badly. But it is over now and you will be out in a matter of months. It will pass.”