For 40 years, SJA member CLIVE EVERTON has seen off all challenges from authority to maintain magazine Snooker Scene as an independent guardian of his sport. Here he recalls some of its history

Well, we’re still here, celebrating our 40th anniversary despite many attempts by the game’s powers that be to put us out of business. Covering the tournaments, observing great players and great matches at first hand, has been the fun part as we have attempted to provide a rolling Wisden for the game, the sort of journal of record that every sport should have.

However, the job could not have been done properly without covering off-table issues as well. From time to time, some readers complained that we carried “too much politics” but without holding various administrations to account or encouraging free discussion of controversial issues, the professional game would surely have gurgled inexorably towards the plughole.

Quite early on, I came to be acquainted with a better class of lawyer, but for all our forthright denunciations of malpractice, we have never been successfully sued and have only once felt bound to make a formal correction because we had got something seriously wrong.

Not even our foes have ever accused us of misquoting them; only one player in all that time complained that he had been unfairly treated in a match report (in fact, he was not).

Working a few days each month on the inside of the B&SCC, I was shocked to discover how run down, unambitious and inefficient this self-perpetuating oligarchy of bungling amateurs was.

Its precarious solvency depended in part on television fees of £100 per broadcast from ITV, for whom they provided “five frame thrillers” for Saturday lunchtime viewers.

Disgracefully, the governing body instructed the players to pre-arrange that the fifth frame would always be the decider. There was no betting element to this but such collusion was a deception of the public. I told the Sunday Times about it and thus became involved in an investigative story for the first time.

It led to the ousting of one B&SCC chairman, Harold Phillips, and his replacement by Jack Karnehm, best known in his later years as a BBC commentator, who for different reasons was little better.

Around this time there was no prospect of earning a full-time living from snooker, or even a substantial contribution towards one, so I covered anything else that was available – hockey, tennis, rugby, athletics, badminton, squash a little football and various bits and bobs.

In January 1968 I walked in to the Lansdowne Club in London to interview Jonah Barrington, the world No1 squash player, for the Birmingham Post, and walked out as his manager.

In those days, squash professionals coached, re-strung rackets and played in a couple of tournaments a year but Jonah wanted to be the first travelling tournament professional, setting up events and gathering a troupe around him.

In pursuit of sponsorship, I went to see Peter West, a BBC sports commentator, and Patrick Nally, a bright young marketing man, who were setting up West Nally, a consultancy specialising in the new but rapidly expanding world of sports sponsorship. They were pitching for the Gallaher account – Park Drive and Benson and Hedges being amongst its brands – and quickly agreed to make squash part of their submission.

What other ideas did I have? Off the cuff, I suggested hockey’s county championship – I was hockey correspondent of the Birmingham Post at the time – and snooker, for which my impromptu idea was a league for the four best available professionals, spread over 18 clubs, in which they played each other three times. The top two then contested a final which West, with his BBC contacts, managed to get on BBC’s flagship Saturday programme, Grandstand.

In a 1970 context, with snooker boasting only nine professionals and only one tournament a year, this was big news. I put pictures of the four players on the front cover of Billiards and Snooker.

Karnehm was incensed that I was “giving professionals publicity” when they were at loggerheads with the B&SCC, the owners of the magazine.  My response was that, like it or not, this tournament had come to pass and it was absurd for the magazine to pretend it had not. Karnehm persuaded the council to sack me.

INSTANTLY, I SET UP a rival magazine, World Snooker, whose first issue, January 1971, three weeks later, also acted as the programme on sale at the 18 Park Drive venues. At that sort of notice, we could not sell the back cover to an advertiser but with the one marketing masterstoke of my career I left it blank save for the word ‘autographs’. We printed 3,000 and sold out.

Fifteen months later, the B&SCC came crawling back. The circulation of their magazine had sunk so low that they could not afford to keep it going. As they did not want to be seen to be failing to meet their obligations to subscribers, they gave me £1,000 to take it off their hands and merge it with World Snooker under my owner/editorship as Snooker Scene. Its first issue, April 1972, price 12p, led with Alex Higgins becoming world champion at his first attempt.

Mostly on the basis that Higgins was clearly something different, that match awakened the interest of national newspapers. For the first time, I persuaded the Daily Telegraph to take four paragraphs a day; I voiced my first reports for BBC Northern Ireland, a relationship still going strong.

In 1973, I dropped virtually all other work to concentrate on snooker, which was becoming more of a paying proposition. In 1976, I became and still remain The Guardian’s correspondent.

In 1978, my BBC TV career began at the Crucible, the first year that the world championship was covered from first ball to last and which proved that the public was prepared to watch snooker at length. Television broadcasters wanted more and the circuit expanded to meet that demand.

SUDDENLY, THERE WERE SO many sponsors that advertising rolled into Snooker Scene without much effort from us. Clubs wanted to advertise open tournaments; trade houses were doing well. There was plenty to report that people wanted to read about.

It was snooker’s period of maximum growth and as the game became awash with money there was more to argue about and therefore more divisions within it than there had been in its more penurious days.

Mike Watterson, who had taken the gamble of promoting the championship at the Crucible and had brought more events and sponsors to the circuit than anyone else, was to be sociably divested of all his contracts as the WPBSA started to flex its muscles.

There was no structural planning. The WPBSA board, in reality a committee of players and their cronies, voted itself a 50p per mile travelling allowance, soon increased to £1 a mile. Champagne flowed backstage at the membership’s expense.

Snooker Scene’s exposure of such abuses inevitably aroused antagonism. No reasoned response was ever forthcoming. They just wanted to get even.

A tabloid rottweiler was engaged “to target specific people, including Clive Everton,” as his leaked memo helpfully put it in establishing the element of malice when I sued for libel. These libels cost WPBSA £115,000 in damages and costs, not easy money, by the way, in terms of the stressful nature of these battles.

Their favourite option was to try to persuade the BBC to sack me from their commentary team. In 1985, as I recount in Black Farce and Cueball Wizards (copies still available), Nick Hunter, BBC’s then executive producer, who had an unhealthily close relationship with the WPBSA’s inner circle, actually did sack me, only for Jonathan Martin, the BBC’s head of sport, to overrule him.

It had been obvious from the early 1980s that the professional game was flirting with self-destruction unless it was more professionally run. But one administration after another seemed to have little to offer beyond a desire to perpetuate its own power.

Perhaps this reflects British politics all too accurately: one party ruins the country until the middle ground of the electorate is fed up with it; then another ruins it in a slightly different way until they in turn are ousted.

Under the chairmanship of Sir Rodney Walker salaries were introduced – and soon increased – and Sir Rodney himself soon came under damaging fire from us over organising substantial commissions from the BBC and Crucible contracts, originating some 30 years earlier, that were paid into a company that he controls.

Now, glory be, there is an administration in place worthy of support both at WPBSA under Jason Ferguson and World Snooker Ltd under Barry Hearn, thus transforming the professional game’s future after three decades of incompetence, mismanagement and sometimes worse.

Snooker’s halcyon days of the 1980s are long gone and will not return in Britain although there remains a very substantial level of support, far higher than for some sports which attract more attention even in this football-fixated age. 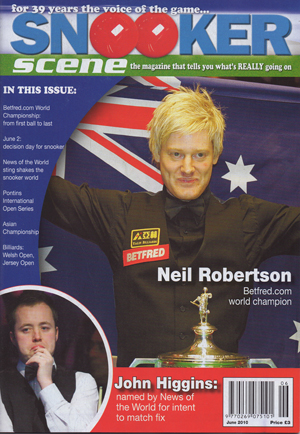 This is nothing to do with snooker’s qualities as a game but primarily with how it has been mismanaged. Other factors include the closure of many clubs for various reasons including rent reviews, smoking bans, jackpot payout restrictions and, simply, property owners identifying more profitable uses for club premises.

MANY LOCAL LEAGUES tend to struggle for volunteer administrators and changing social habits seem to have reduced the number of casual/social players who do not want to commit one night every week to a league match.

It is outside Britain that the game is entering a prosperous new era. This worldwide participation and, pre-eminently, international television coverage, will help promote the creation of a genuinely worldwide professional circuit like those of golf and tennis.

There is always more to be done but it is a joy to be reporting so many good news stories after so many years in which there has been precious little off table “good news” to report.

Whether under my editorship or that of David Hendon, the editor in waiting who I hope has to wait many more years yet, Snooker Scene will continue to be “the magazine that tells you what’s really going on.”