Dai Sport is a fresh breath of Welsh sport with a fiery attitude. That’s the blurb which welcomes visitors to the revamped website which caters for all things Welsh and sporting. One of the founders is multi-skilled freelance IAN GORDON, ex-News of the World F1 correspondent and former PA all-rounder. Here he explains how Dai Sport came about…

The name Dai Sport was agreed upon, as is usually the case with anything involving journos, over a few beers one evening after a Swansea City press conference.

We wanted something simple and easy to remember and which conveys the essence of the site. I guess having a dragon as a logo also helps.

Graham Thomas and I had been mulling over setting up a website focussing solely on Welsh sport for weeks before we eventually decided to take the plunge.

The one thing we immediately agreed about was the site wouldn’t use click-bait to attract hits. And we’ll never carry those infuriating pop-ups and surveys that have become all too prevalent on so many sites.

The aim of Dai Sport is to focus on all sport. Men, women and para.  Of course, rugby (union) and football are our two core sports but we try to give equal prominence to all sports be it netball, ice hockey (big in Wales with the Cardiff Devils) or sailing and squash.

If a Welsh sportsman or woman is running, jumping, throwing, driving, riding or hitting anything we want to know about it. And we’ll carry it on the site.

We don’t, in general, do straight match reports as these are covered elsewhere by other sites with far greater resources.

We tend to focus on stories, opinion columns – the rugby ones, especially on the politics, always get good hits due to the nature of the sport in Wales – as well as quotes-led follow-ups and features.

Our current list of regular contributors are a mixture of seasoned journos – some retired who just want to keep their hand in by writing a column – and youngsters looking for some experience and the chance to build up a portfolio. 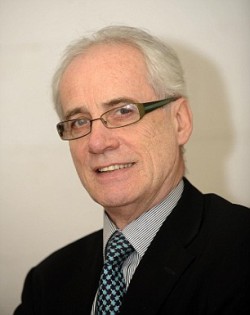 Former Daily Mail rugby correspondent, and SJA chairman of writing judges, Peter Jackson (right)  is a contributor via his Rugby Paper column which we reprint.

Then there is Terry Phillips – who covered Cardiff City and Cardiff Devils for over 20 years for the South Wales Echo – and Robin Davey, who knows more about rugby in Wales and Gwent than most from his many years working at the South Wales Argus in Newport.

Richard Thomas, who covered Glamorgan and the cricket patch for many years for various newspapers and BBC Wales, writes a regular cricket column throughout the summer.

We have some current journalism and broadcasting students who contribute and we’d like to offer opportunities to more students keen to hone their writing, photography and video content skills.

We also want to be the space where the best bloggers in Welsh sport can post their stuff, as well as anyone who wants extend their output from occasional rants on Twitter and Facebook.

The long-term aim is to have a small army of contributors and our recent re-design makes it far easier for people to post stories themselves, freeing up vital time Graham and I spend editing stories and sourcing pictures. 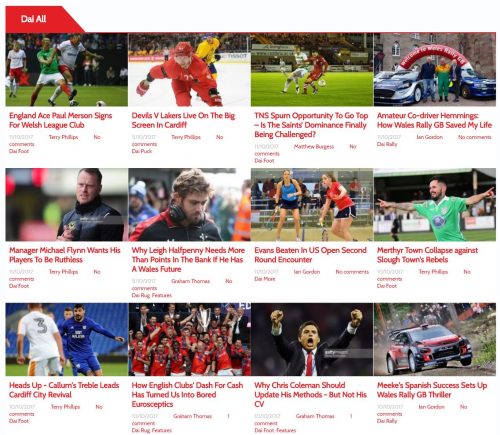 Having to focus on earning a living is also a factor as we try to develop the site with the eventual aim a bi-monthly Welsh sports magazine.

Graham, ex-BBC Wales, covers lots of sports in Wales and SW England for Sky Sports while I’m still doing football games for The Sun as well as other things.

Of course, the aim eventually has to be to monitise the site so that we can pay contributors as well as use the funds to develop Dai Sport even further.

We’d be keen to hear any views people have of www.dai-sport.com and how we can improve it.