Stuart Mathieson, the long-serving Manchester United reporter for the Manchester Evening News, has written his final piece for the paper. 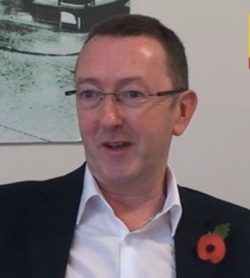 Mathieson reported on the ups and downs at Old Trafford for 22 years after inheriting the Old Trafford beat from David Meek.

Over the two decades the club went from winning the treble to controversial takeover as the Alex Ferguson glory years were replaced by managerial turmoil and a change of fortunes.

Mathieson (right), who insists he is not retiring and will still be a laptop for hire, said farewell via the MEN on Friday.

As he wrote: “It didn’t turn out too bad in the end. One person said to me when I was appointed the MEN’s Manchester United reporter over 22 years ago: ‘It’s the dream job…until you get it’.

“In my first few months in the role in 1995 I was beginning to think those words were very prophetic. Over two decades later I can safely say it was a dream, but with a few nightmares thrown into the enthralling and explosive cocktail that is reporting on United day-to-day.”

Ferguson made a surprise presentation after his final game as a reporter and paid generous tribute to a journalist whom he banned almost immediately after the MEN decided to run a poll asking whether the Scot should be sacked.

“That’s it. I have compromised with the national newspapers for too long for the Evening News. That cosy relationship is over,” a particularly frosty Fergie told Mathieson, who recalled that daily phone calls soon resumed again.

Relations with Ferguson continued to be testing for Mathieson but on the pitch it was glory, glory Manchester United – 23 major trophies in 22 years is not a bad return.

The treble was the icing on the cake with Mathieson recalling: “Over 200 extra pages written in that condensed period, very little sleep, it was exhausting and exhilarating. I doubt whether any other English provincial paper football reporter in the future will ever have that on their CV. I believe it was a unique, never-to-be-repeated event.”

Mathieson’s downside was having to cover takeovers, write about the Rock of Gibraltar row, Roy Keane’s controversial departure and Rio Ferdinand failing to turn up to a drugs test.

The reporter’s stop-start relationship with Ferguson crumbled permanently over the MEN’s coverage of the rebel breakaway club FC United.

Mathieson wrote: “Never to be restored. I always said Fergie would see me to my grave. It wasn’t quite that fatal but I was chucking up in an NHS paper mache bowl post op in May 2013 when the news broke he was retiring.

“Brilliant, all those years dealing with him and I didn’t get to write the biggest story of them all.

“Football, bloody hell,” as someone once said.

John Bean: the soft-shoe shuffler who made Fergie laugh