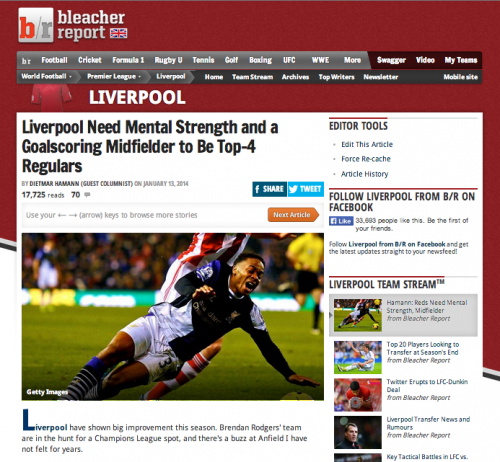 Dietmar Hamann, the former Liverpool and Germany midfielder, is the latest addition to Bleacher Report UK’s team of writers and analysts.

Hamann will produce a weekly column for the website, focused on the Premier League, Champions League and the World Cup.

Hamann joins Guillem Balague, Jonathan Wilson, Andy Brassell, Stan Collymore and Janusz Michallik as a regular contributor to B/R UK, which was launched in July 2013 and is now owned by Turner Broadcasting.

Bleacher Report’s UK launch has seen the site recruit aggressively in the football market. Recent additions include La Liga specialist Paul Wilkes and Serie A writer Adam Digby who are part of a stable of 60-plus paid football writers who file from around the globe.

“As our global audience grows, we need to grow our talent base to keep them coming back,” said B/R’s global sport manager Will Tidey. “Big-name signings like Dietmar Hamann illustrate our commitment to delivering expert comment and compelling content to ensure they stay loyal to what we’re doing. We’re also committed to hiring credible team and league-focused experts all over the world.”

According to Tidey, Bleacher Report UK will be making a big push at cricket in 2014, and the site has been actively hiring Formula One, rugby and boxing contributors. Hires are expected in all areas, as UK managing editor Lee Walker – formerly of Eurosport-Yahoo! – attempts to win over the UK market.