Beware. The following column refers to some “industrial” language – from the football industry –  as NORMAN GILLER reports on the insults and threats he has been subjected to by internet trolls

Manuel Pellegrini and I both suffered the ignominy this week of being called – and I quote – a “f***ing old c***” – “flipping old coach”, as one national newspaper put it. 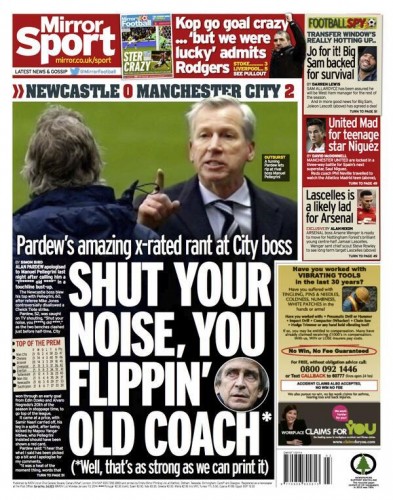 Newcastle manager Alan Pardew, who always shoots from the lip, had to apologise for his touchline verbal assault on the Manchester City boss. I will not get an apology from the anonymous low-life who used the same description of me during an unpleasant exchange on Twitter.

I wonder if Pardew ever saw Pellegrini play? I did, for Chile in the 1980s. He was a granite-hard centre-half who took no prisoners.

Pardew would have found him a real handful. Sorry Al, but he was a much more formidable force than you during your days as a player with Palace and Charlton. You would have been taking your life in your hands if you had called him that back then.

But now he’s “old”, I suppose it’s all right to take liberties. I think Pardew should be hauled before the FA disciplinary committee for being ageist.

The thing about the disallowed “offside” goal that sent the Newcastle manager potty is that if it had happened at the other end of the pitch he would have been equally mad.

If an attacking player is standing unattended in the six-yard box how can that not be interfering with play? Unless the goalkeeper is wearing blinkers he has to be in his range of vision.

In my day – don’t forget, I’m an old git – sharp-reflex players like Greavsie, Denis Law and Sniffer Clarke used to continually have goals ruled offside by just a fraction that caused a lot of friction. Goodness knows what they think when they see the loose use of the offside law in today’s game.

As dear old Bill Shankly famously said; ‘If a player is not interfering with play and seeking to gain an advantage, then he should be. If he’s not trying to interfere with play what the f*** is he doing on the pitch?”

Notice the deliberate use there of the asterisks. That’s the way we used to do it, but many nationals went full throttle on the Pardew touchline outburst.

The C word used to be verboten in newspapers. But now it is becoming almost as acceptable as the F bomb. A sure sign that I really am becoming old.

The only time I have written about Pelegrini previously was when, in the mid-1980s, he retired prematurely at the age of 33 following the horrendous Algarrobo earthquake that killed hundreds, injured thousands and wrecked cities.

Manuel was a qualified civil engineer and decided his duty was helping to rebuild his beloved land, and so he hung up his boots and got his hands dirty doing volunteer work. He is a good man and I am quietly delighted that he is doing so well at City. Not bad for a “f***ing old c***”.

WE’VE NOW HEARD for ourselves how much abuse is handed out on the touchline. It prompts the question of how much abuse we should take on Twitter or Facebook before you call in the Old Bill?

I know plenty of SJA members have to field insults online, but I am talking the vile stuff. Stan Collymore, for example, gets slaughtered, particularly by racists, all of them hiding behind false identities.

In the last week I have had just a taste of what Stan goes through. I block the people who rile me, but I have plenty of friends who report what they are saying about me on the blind side.

My Bill Nicholson Revisited book, with all profits going to the Tottenham Tribute Trust to help old heroes lost in a fog of dementia, seems to have brought out the worst in some people online. Here are just three of the abusive posts I received (more obscene language alert):

“Making money on the back of sick old footballers. Hope your [sic] proud of yourself, you greedy c***”.

I will not print their online “identities”, because that will give them the publicity that they crave. What I’ve done is record all their comments and have filed them, so that if I should suddenly get a physical bashing, the police will know where to start looking.

My daughter has given up her Twitter account altogether because she cannot bear to read the abuse I get. How sad is that? A particularly nasty abuser has sent me a message saying he will damage my kidneys. That’s serious stuff. Perhaps time for me to call in the Old Bill.

Last week’s sentencing of a pair of internet trolls for their threats of physical and sexual violence against Caroline Criado-Perez does at least show that the authorities are taking online bullying seriously.

One thing I’ve done as a result of the online insults is drop the “Uncle” from my Twitter account name because of a rash of “pervo, paedo” smears. “Uncle” was a nickname given to me more than 25 years ago by master broadcaster Eamonn Andrews, who said at a This Is Your Life script meeting: “Everybody has a favourite Uncle Norman.” These days, it sends out the wrong message. How sad.

No question that I am getting sensitive and Victor Meldrewish in my old age, but I am sick to death of the keyboard bullies and people spreading lies and innuendo while taking cowardly cover behind pseudonyms. We must stand up to them.

Facebook and Twitter are soon going to be forced to tighten their registration procedure, and among the suggestions being considered in the United States is that all previous pseudonyms will be included in the personal files. That would open a can of worms for a lot of the trolls and bullies, who change their identities from week to week.

I have gone through a 55-year writing career without making an enemy, yet after a relative five minutes on Twitter and Facebook, I feel battered and bruised.

I am just starting work on a Danny Blanchflower tribute book. He died in 1993 at the age of 67 without knowledge of all that he had achieved as an artistic footballer and outstanding journalist. Dementia has become a huge nationwide problem for old sportsmen. I will be giving all profits from the book to the Tottenham Trust in Danny’s memory.

Now I await the accusations, abuse and threats from the moronic minority, none of whom I can find mentioned on the list of donors to the Tottenham Tribute Trust.

I hope the silent majority, mostly good, reasonable people, make themselves heard and drown out the imbeciles.