The Sports Journalists’ Association is delighted to announce that its special 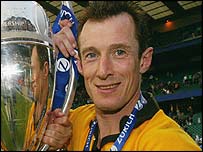 guest at its first sports lunch of 2009 is Rob Howley, the former Wales and Lions scrum-half now on the coaching staff of the defending Six Nations champions.

Howley will be visiting us for a working lunch in Fleet Street next Wednesday, January 21.

Places at this event – open to guests as well as to SJA members – are strictly limited and are expected to be in high demand, so you are advised to book promptly.

Howley captained Wales 22 times in his six-year international career, in which he represented his country 59 times, scoring 50 points. He played in two internationals for the Lions on two British Isles tours, including a memorable 60-yard breakaway try in Australia in 2001. Howley also represented Wales in the Rugby 7s at the 2002 Commonwealth Games in Manchester. 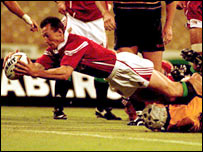 played for Bridgend, Cardiff and Wasps, joining the Wycombe-based club in 2002 where he forged a working relationship with New Zealander Warren Gatland which continued into his coaching career first at club level and, last year with such dramatic effect, as attack coach with the Grand Slam-winning Wales, including their first victory at Twickenham in 20 years.

It is no surprise, therefore, that Howley has also been named as part of the British and Irish Lions coaching staff travelling to South Africa this summer, when he will continue to work with Gatland and another Wasps and Wales coaching colleague, Sean Edwards.

Howley’s career achievements, as a player and coach, are sure to feature in the Question and Answer session we will stage over lunch, when you will be able to ask him about Wales’s plans for the defence of their Six Nations

title, and for the prospects for the Lions in Africa.

HOW TO BOOK
The SJA lunch will take place in the Club Room at The Old Bank of England pub, 194 Fleet Street (next to the Royal Courts of Justice) at 12.30 on Wednesday 21 January.

Payments are to be made on the day to Mary Fitzhenry, by cheque (made payable to the SJA) or cash please.

We are only able to accommodate 30 people, so book your place early by contacting Mary Fitzhenry by email to mary@spokepromotions.com or by phone on 020 8946 9601 or 07946 545084 (please indicate whether a vegetarian meal is required).

Places must be booked by 9am Tuesday 20 January at the latest.

The Howley lunch is the first in a series of working lunches the SJA is organising in 2009, offering the strongest programme of lunches in the Association’s history. Provisional dates and guests include:

January: Phil “The Power” Taylor, the 14-time winner of the darts world title

All details are subject to change until confirmed by the SJA, both on this website and via emails to members.