Reminded by Martin Samuel’s arrival at the Daily Mail this week, NORMAN GILLER celebrates another great EastEnder who graced the back pages 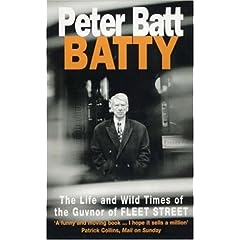 I have saved my old mate Colin until last, because he leads me to somebody who was in the Samuel class as a gifted wordsmith but stands head and shoulders above us all as a character of legendary status. I give you Peter Batt.

Everybody has a Peter Batt story, the difference being that I was there as a disbelieving and often dismayed eyewitness at the birth of many of the anecdotes that have made him fabled.

I first came across Peter the Poet when I was a copyboy on the dear departed London Evening News in the mid-50s. One of the copytakers used to berate the reporters with such bellowed comments as: â€œIs there much more of this crapâ€¦?â€ This, of course, was Batty, recently off a building site where he had been a labourer following his National Service in the Army, which was largely spent in the glasshouse.

Our paths next crossed on the Stratford Express where I was sports editor, and Batty came swanning in as a news reporter after being infamously given the tin-tack (a Battman phrase) from a string of local papers in what were invariably drink-related incidents.

His reputation arrived ahead of him, and Peter did not disappoint us with his behaviour. There were hilarious scenes, with our Tom Thumb of an editor, Tom Baily, continually giving finger-pointing lectures to gangling, 6ft 2in Batty about his conduct. Late for the umpteenth time, Peter was called into Baileyâ€™s office for a final yellow card warning and he proceeded to explain that he had been to hospital â€“ â€œbecause I cut me old John Thomas while with a bird last night.â€

improbable excuse. Uninvited, Batty unzipped and plonked his bandaged plonker on to his desk! The evidence. End of case.

The beauty of Peter Batt stories is that you donâ€™t have to dress them up and embellish them because they are all true. He was finally escorted off the premises of the Stratford Express a few weeks later after turning up paralytic drunk. Dear old Tom Bailey was so intimidated by his booze-fuelled aggression that he called the police to make sure he left the building. Tin-tacked again.

Next, 1962, I was sitting subbing on the Daily Herald sports desk when, waving to me across the open-plan editorial floor with a hangar-size grin, was none other than Batty. My fellow Stepneyite had blagged his way into a news reporterâ€™s job.

This is where Colin Hart comes in. At the time he was the Heraldâ€™s brilliant night news editor, and when it came over the wires that a London-bound plane had crashed in the Pyrenees he sent fireman reporter Batty to the scene. Battman being Battman, he got to the foothills in an inebriated condition, and when the taxi-driver dropped him as close as possible to the scene of the crash he managed to fall over in the snow while attempting to walk up the mountain.

Rescuers coming down from the wrecked plane found him, picked him up and carried him to a nearby convent where he was put into bed and nursed by nuns, who did not help his condition by giving him copious shots of brandy to warm him up. Word got back to other reporters covering the story that a survivor had been found. They dashed to the convent to discover a pissed-as-a-pudding Batty sitting up in bed toasting their arrival and saying: â€œThought Iâ€™d died and woken up in â€™eaven.â€

Peter, of course, morphed into a sportswriter of supreme talent, but always with the bottle between him and convention. I am certain to return to him in future columns because there are at least a hundred stories I have not told here â€¦ such as how we worked together on a Barry McGuigan biography that was pulped, wrote a sit-com for ITV that was dropped, applied together to write for EastEnders, him falling blind drunk off the stage at the London Hilton while singing My Way at the Geoff Hurst testimonial dinner, and how I managed to lose his autobiography (of which he had only one copy) in Mexico during the 1970 World Cup.

But he got round to rewriting it eventually, and I recommend you to beg, steal or borrow â€“ or preferably buy â€“ a copy of his story Batty, The Life and Wild Times of the Guvnor of Fleet Street (published in 2000 by Headline). I have rarely known anybody cut themselves open quite like Peter did in his book, and it acts as a stark warning to anybody who likes a glass or two too many. Watching him hitting the bottle was like being a witness to a slow-motion train crash. A lot of us tried hard to save him, but he continually broke hearts and promises in equal number.

In his sober moments (and also often while out of his head) he was a blinding master of the written word, and a credit to the east London school of sportswriters now so brilliantly represented by Martin Samuel. He used to be billed in the Daily Star as the “Biggest Four Letter Word in Sport”. Until he got the tin-tack. Again. He fittingly left behind a stream of four-letter words as he was shown the door.

There will never be another Batty. A pity we cannot, uh, bottle his talent.