In a sporting year like no other, TOMAS HILL LOPEZ-MENCHERO and JONNY BRAY make the case for two contenders for the SJA’s sportsman and sportswoman of the year prize, Giro winner Tao Geoghegan Hart and record-breaking jockey Hollie Doyle. Find out who wins on December 10th, with this year’s awards broadcast live across our social channels. 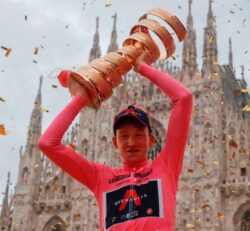 From domestique to Giro d’Italia winner, few could have predicted Tao Geoghegan Hart’s meteoric rise in 2020.

Born and bred in Hackney, he arrived in Sicily as support rider to Ineos Grenadiers’ Geraint Thomas, tasked with helping the pre-race favourite to victory and was 126th in the race after the first stage.

But that all changed when a loose water bottle lodged itself under Thomas’s wheel and left the Welshman with a fractured hip that ruled him out of the race on stage three of the notoriously difficult tour.

Thomas’ misfortune was Geoghegan Hart’s opportunity, and the 25-year-old grew in stature as he won two impressive mountain stages to put himself in contention for the pink jersey.

He sealed victory on the final day of the tour, beating Australian Jai Hindley to become only the second British man to win the Giro after Chris Froome.
Geoghegan Hart went into the final day sharing the lead with Hindley, but beat him by 39 seconds in a 15.7km time trial in Milan.

“It’s bizarre, to be honest,” he said. “Not in my wildest dreams did I imagine that this would be possible when we started almost a month ago in Sicily.

“I think all of my career I’ve dreamt of trying to be top five or top ten maybe in a race of this stature.  This is something completely different to that and I think it’s going to take a long time to sink in.”

Has it sunk in yet @taogeoghegan? Let’s go behind the scenes during the whirlwind of a final-day #Giro victory 🎥 #GreaterTogether pic.twitter.com/29TvRvyTYv

Considered a promising rider for the future, Geoghegan Hart’s two stage wins at last year’s Tour of the Alps led to him being chosen as leader for the 2019 Giro.

He crashed out late at that tour, but this year’s edition was a different story from the moment he beat Wilco Kelderman to his first Grand Tour stage win at Piancavallo.

It was Geoghegan Hart’s remarkable performance in the mountains which set him on the path to victory, coming second at stage 18 before winning the penultimate stage at Sestriere.

That left the final stage time trial for Geoghegan Hart to claim a historic triumph that confirmed he is very much his team’s present. 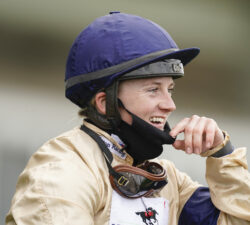 Hollie Doyle smashed records this year as she became the first female jockey to ride a winner on Champions Day at Ascot on 17th October, steering Trueshan to victory in the Long Distance Cup – her first group one success.

Just three days earlier, the 24-year-old broke her own 2019 record for most wins in a year by a female jockey with her 117th race victory at Kempton, finishing the year with 120 wins.

Fellow jockey and boyfriend Tom Marquand, 22, said: “I was buzzing for Hollie at Ascot, and to do it on Scarlet Dragon as well, a horse that I rode out my claim on.

“She’s a real grafter. Since last winter she’s worked very hard in the gym to put on weight, which I thought was a real turning point in her riding.  She’s not just standing out as she’s a female rider doing well. There’s only a few riders the lads in the weighing room don’t want to come up against and she’s one of them.”

Her relationship has been partial to interest from the press, but her achievements have outshone it.

Champions Day 2020 is one we won’t be forgetting in a while!
Glen Shiel wins the G1 Champion Sprint Stakes for @Archie_Watson & @HambletonRacing !
Trueshan wins the G2 Long Distance Cup for Alan King & The Barbury Lions!
Thank you for all the messages!🌟😀🙏🏻 pic.twitter.com/tlKvPMWLbO

That record-breaking day at Ascot was capped off by Doyle winning her first ever Group 1 race, coming out victorious in the Champions Sprint on Glen Shiel.

In doing so she joined Alex Greaves and Hayley Turner as the only female jockeys to have triumphed at that level in Britain.

These achievements were preceded by Doyle becoming the first female jockey to win five races on the same card at Windsor in August, overcoming 899-1 odds.

She finished a monumental year as the most prominent new face at the Breeders’ Cup in Lexington, Kentucky, continuing her dream of racing overseas.

Doyle has been keen to redirect praise towards her horse or, as was the case at Ascot, the horse’s trainer. No other sportswoman has achieved as much when competing against men in 2020 and despite the novelty it brings, she is keen to not let her gender define her or her achievements.