In a sporting year like no other, CHRIS BYFIELD and KASRA MORADI make the case for two contenders for the SJA’s sportsman and sportswoman of the year prize, world heavyweight champion Tyson Fury and star cyclist Lizzie Deignan. Find out who wins on December 10th, with this year’s awards broadcast live across our social channels. 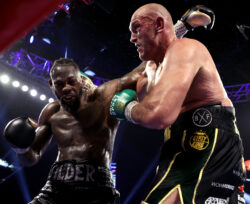 In February, Tyson Fury knocked out Deontay Wilder in the seventh round to win the WBC heavyweight title and complete one of the greatest comebacks in sporting history.

In December 2015, Fury, 32, was stripped of his WBA, WBO and IBF titles and later departed boxing amid a public battle with mental health that resulted in addiction and extreme weight gain.

However, Fury defied droves of doubters by returning to the sport and then by emphatically defeating Wilder, 35, at the MGM Grand Garden Arena in Nevada.

Like many, David Haye had questioned Fury’s chances but told BT Sport: “Rarely do I watch a boxer, particularly in the heavyweight division, and think ‘that was beautiful’. Find me 10 seconds of this fight that weren’t perfect.

“The world now knows he is as good as he says he is.”

The bout was the second encounter between Fury and Wilder, after the first ended in a split-draw decision in December 2018, when the Mancunian spent most of the evening boxing from the outside with erratic feints and effecting jabs.

For February’s rematch, Fury boldly replaced Ben Davison, the trainer who had marshalled his comeback, with SugarHill Steward and consumed six meals and eight litres of water daily to weigh-in heavy at 273lb against the Alabama natives’ career-high of 231lb.

This time Fury also vowed to knock Wilder out.

It was an audacious claim the boxing world laughed off – Wilder had not been dropped in a decade and was widely considered the sport’s most powerful puncher. Yet, Fury has a habit of proving people wrong.

He applied the pressure from the opening bell, dropping Wilder with a right hand to the temple in the third, and again with a left to the body in the fifth.

By the seventh Wilder’s legs were gone and blood was seeping from his left ear, and Bronze Bomber’s corner threw in the towel.

Fury has since turned down the prospect of a third fight against Wilder, and looks set for a unification bout against 31-year-old compatriot Anthony Joshua next year, in what could be the richest fight in history. 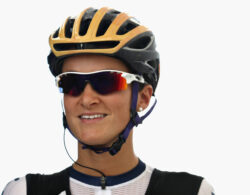 British road cyclist Lizzie Deignan has enjoyed a stellar year of racing, including three major world tour wins and having a monumental impact on the overall culture of professional women’s cycling.

Riding for Trek-Segafredo, Deignan’s back-to-back wins, first a dramatic photo-finish against favourite Marianne Vos at Tour de France’s La Course and then at GP de Plouay, were followed by an enthralling Liege-Bastogne-Liege victory.

The 31-year-old has now been crowned the 2020 UCI Women’s World Tour (WWT) winner, despite a two year hiatus from racing between 2017 and 2019 due to the birth of her daughter Orla.

“In terms of my aspirations for next year, it would be brilliant to win the WWT overall again.”

Deignan’s accomplishment in becoming the first ever mother to win La Course, and in doing so proving that it’s possible to still be a top level athlete, has broken down barriers for sportswomen everywhere.

She explained that many thought childbirth signalled the end of her cycling career, and some initial reactions to her pregnancy were even overshadowed by concern.

Deignan said: “It wasn’t like for a normal woman, when you say ‘I’m pregnant’ and people give you a hug and they’re really happy, people were like ‘what are you going to do about your career?’, that was the first question.”

Since childbirth, the 2012 Olympic silver medallist has been open on social media about balancing life as an elite athlete and parenting, whilst still maintaining her high-level performance amidst a packed coronavirus affected schedule.

Having initially planned to retire in 2020 after the Tokyo Olympics, Deignan’s recent success at the top has only fuelled her hunger.

She said: “I had always envisioned retiring after the 2020 Olympics, but I think the fact that I’m enjoying my job so much and experiencing such an enjoyable team environment means that I feel motivated to continue further.

“I don’t see a reason to stop when everything is going so well.”