In a sporting year like no other, BELLA BUTLER and TOM MASTERS make the case for two contenders for the SJA’s sportsman and sportswoman of the year prize, record-breaking wicket taker Jimmy Anderson and wheelchair racer Hannah Cockroft. Find out who wins on December 10th, with this year’s awards broadcast live across our social channels. 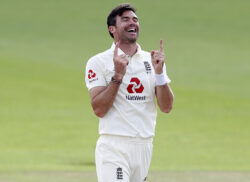 Jimmy Anderson has had another record-breaking year as he became the first ever seam bowler to claim 600 Test wickets.

The 38-year-old was playing his 156th Test at The Ageas Bowl in August when he made history, joining an illustrious list, with just spinners Muttiah Muralitharan, Shane Warne and Anil Kumble reaching the milestone beforehand.

Anderson entered the fifth day stuck on 599 wickets after being dropped four times in 37 deliveries across days three and four.

Anderson has had a historic career, breaking onto the cricket scene with his spikey coloured hair in the summer of 2002 in his first-class debut for Lancashire at 19 years old, taking three five-wicket hauls in his first 15 matches.

He made his One Day International debut that December and went on to make his Test debut against Zimbabwe in 2003 where he claimed a five-wicket haul for just 73 runs.

After a gruelling injury streak between 2003 and 2008 where Anderson appeared in just 20 Test appearances, he re-established himself in the England squad where his partnership with long-term teammate Stuart Broad emerged following the tour of New Zealand.

Achieving 600 wickets comes at the end of a summer without crowds due to the coronavirus pandemic, whilst Broad was able to reach an impressive milestone of his own, claiming his 500th Test wicket against the West Indies.

On Anderson’s remarkable performance, Broad said: “It’s just a phenomenal achievement.  He has got better with age and is someone who has inspired me throughout my career.

“He’s a role model to follow for every English cricketer and young cricketer coming through. He’s always searching to be better and better and 600 won’t be the stopping of him.”

The ‘Burnley Express’ goes down in history as one of England’s all-time greatest bowlers, with his best figures of 7-42 coming against the West Indies at Lords in 2017, and his achievement this year cements his status as one of Test cricket’s greatest quick bowlers. 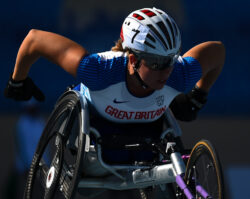 Five-time Paralympic wheelchair racing gold medallist Hannah Cockroft had another stellar year, beating four of her own world records inside four hours in September at Stoke-Mandeville.

The 12-time world champion and three-time European champion was left with an impairment in her feet and legs after suffering two cardiac arrests at birth.

She never let this hold her back, and at the age of 15 discovered her incredible talent for wheelchair racing, which has been shown to the world on many occasions since.

Cockroft said: “When I got in the chair, I instantly loved it. It was a feeling of freedom and independence I’d never had before.

“I grew up always being told to be careful to slow down. With wheelchair racing no one could say that, it was just ‘go as fast as you can and just go’.

“I think that’s why I loved it because no one was trying to stop me.”

Hannah made history when she became the first para athlete to win one of the SJA’s major awards – sportswoman of the year – in 2017. At the time she said: “I like to make history, but this is just something new.  You see awards like this and you always think it is just the pity vote, the politically correct vote. You see yourself up there alongside sporting giants and think that’s nice.”

This year was supposed to be the year that Cockroft went to Tokyo to defend her three gold medals from Rio in 2016.

She won gold in the 100m, 200m and 800m in the T34 class, setting Paralympic records along the way, and will be going to defend them next summer, a year later than planned due to the coronavirus pandemic.

Over the first national lockdown, Cockroft built herself a gym in her garage in order to keep her training going, something which ultimately led to an incredible day at Stoke-Mandeville on 12 September.

Unfortunately, due to the meet not being sanctioned by World Para-Athletics these times did not count as new world records, but Cockroft, who also holds the world record in the T34 1500m, was still upbeat.

She tweeted: “In a year where I’ve barely touched a track or a gym, imagine what we can do now we’re back!”

In August next year, Cockroft will be hoping that she can replicate her phenomenal performance at Stoke-Mandeville in Tokyo, where she will be vying for even more gold medals.