In a sporting year like no other, LUKE EDWARDS and JAMES KELLY make the case for two contenders for the SJA’s sportsman and sportswoman of the year prize, dominant wheelchair tennis star Alfie Hewett and British record breaker Laura Muir. Find out who wins on December 10th, with this year’s awards broadcast live across our social channels. 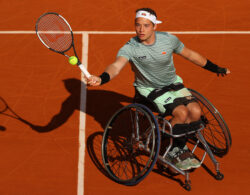 It’s been a turbulent year for 22-year-old men’s wheelchair tennis star Alfie Hewett, but on the court his story has been one of pure success.

In October, he won his second Roland Garros title, taking down second seed Gustavo Fernandez in straight sets in the semi-finals before beating Belgian Joachim Gerard 6-4, 4-6, 6-3 in the final.

That French Open title means Hewett has now won a singles Grand Slam title in each year since 2017.

Hewett also reached the US Open singles final but failed to defend his title, and made the semi-finals of the Australian Open for the first time.

Ahead of the US Open, Hewett said: “You feel like a new kid when you get out on the court after a few weeks being locked up at home and not going out too much.

“I didn’t get back out on court because I was desperate to compete, but more because I just missed it and that shows how much this sport means to me.”

But Hewett’s biggest success of the year came in the doubles as he and partner Gordon Reid completed an historic treble over the course of the year, winning all of the available Grand Slam doubles titles as Wimbeldon was cancelled due to the coronavirus.

They became the first pairing ever to achieve the feat and as a result, the duo are currently the world’s number one pairing.

Unfortunately, as things stand, the 2021 season could well be Hewett’s last.

He has Perthes Disease, a birth condition that affects the hip joint, but classification changes on disabilities mean, as things stand, he will be ineligible to compete in a wheelchair as of 2022.

Hewett said: “I have had to come through a lot of adversity. I have played for 13 years. I have had an unbelievable career. I’m proud of where I’ve got. We are so lucky in what wheelchair tennis has to offer and now it is being snatched out of my hand through no fault of my own.”

But it’s not all over yet. With the upcoming Paralympic games and another year of slams, Hewett has eyes on a lot more prizes. 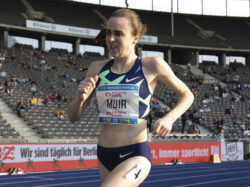 Few would classify 2020 as one of the best years of their life, but Laura Muir is an exception.

The Scottish middle-distance runner has enjoyed a sensational season after enduring a disrupted 2019 due to a calf tear.

Muir beat Dame Kelly Holmes’ British record for the 1000m back in August with a time of 2:30.82, as she finished second to Faith Kipyegon at the Monaco Diamond League.

Earlier in August, she ran a world leading 1500m time of 3:57.86 at the Stockholm Diamond League, and she then went 0.4 seconds quicker in September at the ISTAF meeting in Berlin.

These performances have come during a truncated athletics season owing to COVID-19, which included the postponement of the Olympic Games and cancellation of the European Championships.

But with Muir unbeaten over 1500m this season, her medal hopes look promising in the rearranged Olympic Games in Tokyo next year.

Muir was named Scottish Athletics’ joint Performer of the Year in October, after winning the award outright in three of the last five years, and was the sole British nominee when World Athletics released their shortlist for Female Athlete of the Year earlier this month.

Muir told Athletics Weekly: “To come out this season and run three 1500m runs and all be sub-four minutes and all really strong and winners, it was like, ‘okay, this is good’.

“It has helped my confidence a lot. I lost quite a bit of confidence last year with injury and even though I performed well in Doha and clawed it back a bit, it was hard. It has done me a lot of good being able to race this year, and race well.

“It was hard because I had put the whole of 2020 on hold to revolve my whole life around the Olympics.

“I didn’t really have any other plans. When that went it was like, ‘oh, now what?’

“It was gutting for me because the Olympics only come around once every four years and it was something I was really looking to perform at.”