TALES FROM THE TOY DEPARTMENT: As part of the SJA’s 60th anniversary, we will be publishing a collection of articles 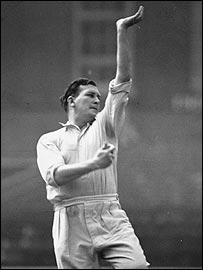 that celebrate the best of British sportswriting, that commemorate some great sporting events of the past six decades, or which recall how our business has altered since 1948.

In 1956, Jim Laker, pictured, took 19 of 20 wickets in an Ashes Test match against Australia. For that achievement, Laker was voted second in that year’s Sportsman of the Year poll (beaten by Olympic steeplechase gold medallist Chris Brasher, long before he became a sports hack himself and President of the SJA).

Here, in an extract from The Guardian, the Surrey and England spinner’s life and career is recalled by one of the finest sportswriters of all, JOHN ARLOTT

There are not many unquestionable superlatives in cricket history, but it is beyond doubt that Jim Laker – “JC” – was the finest off-spinner the game has ever known.

Wry, dry, laconic, he thought about cricket with a deep intensity and a splendidly ironic point of view. He grew up in some isolation under the care of his aunts in Saltaire, and was called upon for scrutiny at the Yorkshire nets before the war. They approved him as a batsman, but then the war engulfed him.

hands related: “You can hear the ball bounce as he lets it go.”

He came back and settled on the edge of London, was recommended to Surrey and – with Yorkshire’s permission – they registered him. He made his first-class mark in 1947, bowled skilfully in the West Indies in the following winter, and then was heavily battered by the strong Australian batting side of 1948: one Test, and apart from another West Indies tour in 1953 he did not find a regular place until 1956. This despite the fact that in the Bradford Test trial of 1950 – comfortingly near home – he took eight wickets for two runs.

In 1956 he took his revenge on the Australians. For Surrey, in their match with the touring side, he took 10 for 88. Then came the unmatched triumph: in the Old Trafford Test he took 10 for 53 and in the second innings 9 for 37, which made him the only bowler to take 19 wickets in a first-class fixture – and it was in a Test match against the Australians.

He set a record for a Test series with 46 wickets that year. He could bat usefully – two first-class hundreds – and he could catch close to the wicket. Supported by Tony Lock, he was the major wrecking spin influence in Surrey’s great period of triumph in the County Championship between 1952 and 1958.

Just how good was he? He passed every test you could possibly apply to an off-spinner. His grip could be infinitely varied so that no batsman could read anything from it, and he paid the price for the terrified tweak he gave to the ball by eternally massaging his cruelly bowed spinning finger with ointment.

He once asked me how many strides he took in his run-up to the wicket – “Sometimes four, sometimes five, sometimes six.” “Well,” he said, “you have missed four-and-a-half, five-and-a-half, and the little rock.” He had so many arcs of flight – and none of them foreseeable by the batsman – that he took wickets through the air as well as off the pitch. Once that deadly off-spinner landed, though, it tugged at the earth and turned back savagely: or, just when the batsman thought himself used to that, it pitched and skidded and there was a catch to slip – and there was that twisted grin of satisfaction.

He did not suffer fools gladly and people could upset him without knowing it.
In 1959 he left Surrey. On retiring from the first class game he played league cricket for one season or more. Then, in 1962, following an invitation from his friend, Trevor Bailey, he turned out for Essex as an amateur, and went on to play some 30 games for them and finally retired in 1964. By saying what he thought he got himself into trouble with both Surrey and the MCC, both of whom wisely, if belatedly, forgave him, and he actually joined the Surrey cricket committee.

His daughters loved him, his wife Lily adored him, and if he took a quizzical look at the world, he missed very little. To work with him and to be accepted by him was something of an accolade and admission to a school of cricketing thought that was sometimes quite bewildering in its depth.

The off-break is not merely the bowler’s bread and butter, it is his staff of life. And in that school Jim Laker was the past master.