TALES FROM THE TOY DEPARTMENT: In our series charting 60 years of sports journalism, JOHN SAMUEL, pictured left, the former sports editor at the Daily Herald, Observer and Guardian, continues his personal account of life on the sports desk in the days before Quark, CMAs and Google

Then as now, Brighton was a popular commute for journalists. For the Brighton Pullmans of the 1950s and 1960s, there was a special kind of club. Laurence Olivier was a compulsive reader of Brighton Theatre Royal reviews over the Brighton Belleâ€™s bacon and eggs, and Peter Black and Derek Granger, contemporaries on the Argus and Sussex Daily News, had him to thank for early references. It led Peter, an accomplished one-armed golfer, to become the Daily Mailâ€™s pioneer television commentator and Derek the producer of Coronation Street in Granadaâ€™s drama heyday.

My mentor for a move from Reuters for a 50-year involvement with Fleet Street was a degree less glamorous. Chris Bale, a veteran Daily Herald sports sub, hair licked to a shine, ever smart of tie and collar, was regularly to be found enjoying a dram on the Belle, along with his streetwise Herald colleague Charlie Hughes and rather more emotional David Williams.

It was Chris who one evening told me of a sports subsâ€™ vacancy, and soon I found myself giving up the Reuters job for another Â£100 a year, the difference between buying a second-hand Triumph Roadster and not.

The Herald began in 1911 as a strike vehicle for London compositors. Under a TUC/Odhams ownership from 1933, it became the worldâ€™s first newspaper to sell 2 million. Over the years it had opposed

After the Second World War, the Herald had struggled to locate a new readership. Flat caps would not do. The Herald desperately sought to buy in a bit of class. Tony Boram and Sam Leitch came to the sports desk from the Express, Scotty Hall from the dying Sunday Chronicle. A new editor, Douglas Machray, sometime Press Golf Society captain, bawled out the news desk for failing to report the launch of a brand new British car, the Triumph Herald. He also told Boram that poor old David Williams would never again write golf after a carry-on at the Sunningdale clubhouse, where Williams suggested to Gerald Micklem and anyone else who would listen that they should pull down all those smart fairway houses for workersâ€™ cottages.

So two weeks later, virtually single-handed, I covered the 1957 Lindrick Ryder Cup, where Great Britain and Ireland beat the United States. It was the sole British Isles victory between 1933 and 1985. The American Tommy Bolt chucked his clubs and Britainâ€™s Harry Weetman vowed never again to play under Dai Rees, which was all grist to the Expressâ€™s eight-man team.

You grew used to such challenge. When you toured with Englandâ€™s rugby team, Jeff Butterfield and Gordon Bendon would tease you mightily about your readership around Twickenham, but ensured you were at all their parties and never short of info or opinion. In return, you pointed out that Wales did have a rugby team and the Heraldâ€™s sales were rock solid down there.

Up in Manchester, the Herald had a solid front in Frank Nicklen, subsequently Sun sports editor, and Neville Holtham. When Holtham took over the sports editorship, Boram having been promoted to night editor, he shifted me from chief sub to deputy sports editor.

But when Holtham moved on, an Observer advertisement for a deputy sports editorship beckoned me. Chris Brasher was made sports editor under David Astorâ€™s editorship. David relished the amateur, but there was nothing amateur about Chrisâ€™s drive and ambition, and he was to make an outstanding career with the London Marathon, his leisure shoe business and occasional return flights into journalism.

The nuts and bolts of page make-up and edition times were not Brasher’s strong suit. The Observer had one of the great cricket writers in Alan Ross, but it served the paper little if Leeds were not getting the close-of-play scores. My function was to see that it did, talking the printer into modest re-disposals, and buttering up home and foreign editors to the needs. Then, too, commissioning on a wide front and exploiting the evolving camera techniques of Gerry Cranham (flying hooves under Becherâ€™s Bookâ€¦) for more spectacular page make-up.

Ken Obank, the managing editor, saw that the function required a sports editorâ€™s authority, to which Brasher, keen to hang on to his writing and anxious to make a name in television, reluctantly agreed.

Most of the Observerâ€™s top names, Brasher included, employed the Bagenal Harvey organisation as agent. Although our writer fees were not unreasonable, they did not support a mortgage or a family, and the sports pages, inevitably, were a showcase for TV and other ambitions.

I began to enjoy a mutually sharing relationship with David Gray at the newly launched Grayâ€™s Inn Road office of The Guardian. In 1962, Obank was badly injured in a car crash, and finally things got out of hand at the Observer. Astor called me in to say he thought it really needed an amateur to get the best out of amateurs (many years later he was to apologise). Fortunately Gray quickly came in with a job offer.

The Guardianâ€™s situation was unique in that as a company with a controlling trust, namely the Scott Trust, it sought to be a business, but with a leftist moral tone in its attitude to government. Different people had different ideas for the tone. It varied from Jo Grimond to Karl Marx. Strictly, it had no sports department, certainly not in a Fleet Street sense. There were fine writers – Pat Ward-Thomas, Denys Rowbotham, John Rodda, David Frost, Eric Todd – but in a limited number of activities. There was no horse racing, equestrianism, Formula One, sailing, rowing, winter sports and snooker, sports for the most part with a rising TV presence.

In the first couple of years, sharing production with the Sunday Times at Kemsley House, it was as much as we could do to make the TTS work. TTS, or teletypesetting, was a Guardian invention whereby you halved lino and monotype operator input by use of a tape fed to a distant machine, which spat out identical rows of type with the keys moving up and down like a pianola. Mozart it wasnâ€™t. The machine made many mistakes of its own – hence the Grauniad – and it was useless for the tiny type on which sports detail is based. Life on the stone could be a nightmare. Time after time the printer called, â€œNo more correctionsâ€¦The trains wonâ€™t wait.â€

A bit of a Cinderella from other departments, sport was a pleasant enough co-operative, if seriously short on space and money. In 1968, I formally succeeded David Gray, who, in the cause of his beloved tennis, took over as chief executive of the International Tennis Federation as it made its first awkward steps into professionalism. Step by step, a comprehensive sports service was coming into being: John Arlott from Observer days; Eric Dymock Grand Prix; Bob Fisher sailing; Chris Dodd rowing, among them.

Ideologicial objections to betting had meant that the paper had never carried horse racing cards. Without racing, no national could call itself comprehensive. Obviously, too, there was a circulation benefit. What we could not do without was Richard Baerleinâ€™s stableyard knowledge and wisdom.

After carefully making the case and putting forward a budget, a comprehensive racing card and results service at last came about in January 1970. I had made every effort not only to cost a two-man move from the old Herald racing desk (Harry Heymer and David Hadert), but added setting and correction time. We could afford no Grauniad literals on the favouriteâ€™s price. In the event, a TV advertisement of two jockeys discussing the new service helped put 30,000 sales on our daily 300,000.

Frank Keating sought me out for sports desk job after seven-year TV fling. Arthur Hopcraft, one of my old Observer contributors, scriptwriter of Tinker, Tailor, Soldier, Spy, author of The Football Man, was quickly on to him. â€œThereâ€™s a very good writer trying to get out.â€

Frank was our man for the times. He wrote in pictures. He would write of the little known Jimmy Sirrell, who took the long-languishing Notts County back in to the First Division in 1983: â€œI only met him once, a beguiling old timer with a nosebag conk under a spiky wartime haircut, and a Scots accent as thick as a Hebrides sweater.â€ You didnâ€™t need a pixel camera to see him.

David Lacey was building his logical place as a top football writer, matched stride by stride in the north by Patrick Barclay and by Charlie Burgess in the Midlands. Neville Cardus returned as emeritus cricket essayist, â€œWhat, 1,500 words?â€¦. Iâ€™ll pay you.â€

When I conveyed Bagenal Harveyâ€™s shaky, late-night threat of a libel action for his remark about Jim Lakerâ€™s â€œdrearyâ€ TV voice, the old 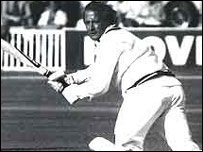 boyâ€™s voice shook with emotion. â€œFurtwangler, Klemperer, Toscaniniâ€¦ all Iâ€™ve written about them, never a libel action. When, when?â€ The answer was never.

Sport was at its most political with Basil dâ€™Oliveira, and Arlottâ€™s powerfully worded views undoubtedly convinced Gubby Allen at the MCC, and most players, in his rejection of apartheid South Africa’s terms.

Peter Dobereiner needed little coaxing to spread wings with us and the Observer. As long as he didnâ€™t write features, the Observer managing director decreed. Peter wrote nothing else. An insider tip brought Matthew Engel and Steve Bierley from Reuters; Ian Ridley put a shrewd finger on strengths and weaknesses at interview; Roger Alton built up his formidable CV as deputy sports editor, his draughtsman skills just right for the type of action picture pioneered by Eamonn McCabe. Televisionâ€™s visual appeal had changed newspaper make-up for all time.

Peter Preston, who had succeeded Alastair Hetherington as Guardian editor, was more

attentive to the detail of sports coverage. But space was at a premium until the dawn of the computer age, and, letâ€™s face it, Murdochâ€™s busting of union power.

In 1986, the launch of the Independent shook the Guardian to its core. Charlie Burgess, then my deputy, I know had shown an interest in moving, asking what I would do with it. I saw space and money as my biggest limitations over the years, and said he should demand a minimum five pages, more at weekends, each column and every edition costed to the last penny, and offer of a couple of thousand a year above every Guardian salary and (tongue in cheek here) the appointment of a disabused veteran columnist. I had little taste for computer journalism and moved to develop the Saturday paper, as Mike Averis, deputy night editor, more than capably took over as sports editor.

Sport today is awash with show business and commercial gigantism. The papers reflect and exploit it, sometimes with concealed agendas, but not as active sponsors. Extra space involves responsibility. Three or four people may cover a single football match. Soccer, even in summer, can occupy the first eight pages of a quality’s sports section, to the detriment of other activities.

Computer-style reportage is formal or blokey by turn, never seriously literate. Local radio and newspaper coverage has more of a role than is sometimes perceived. There are a lot of people sitting in traffic jams waiting for scores or gossip.

In other respects there is minimal change. For the nationals, sport demands knowledge, an observant, critical eye, inquiring mind, style and humour. Backed as always by a spot-on details service.

This is the latest in an on-going series of articles about covering sport over the past six decades.

To read David Hunn on how the Association was formed, click here

To read Hugh McIlvanney writing about the Best footballer he has ever seen, click here

Book your ticket for the 60th anniversary SJA British Sports Awards – click here for the form, including the membersâ€™ price discount